THE SALAR ON FILM 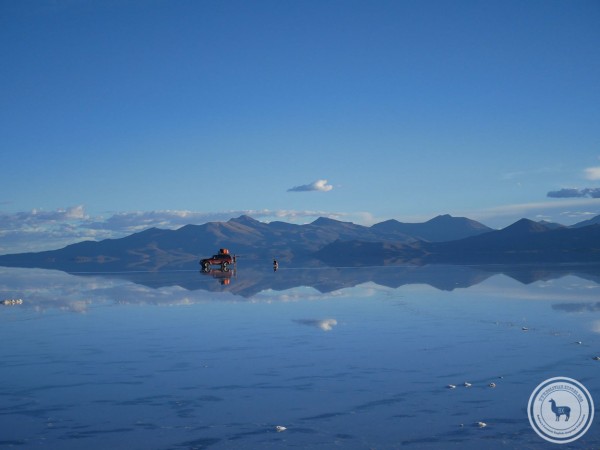 A sensory marvel put into perspective

People experience some of the most surreal feelings while on the Salar de Uyuni. Beyond its apparent nothingness and rich amount of resources, including thousands of tons of salt and massive lithium reserves under the salt crust, the Salar is a place unlike anywhere in the world in terms of how it deceives your senses.

A select team of filmmakers from the United States wanted to shine a light on the ongoing conflict between the salt gatherers on the Salar and the Bolivian government, which is straining their livelihoods by harvesting lithium. They eventually produced the harrowing documentary, 'Salero'. There were eight shoots over six-and-a-half years, and they have finally produced the movie that will premiere and tour in Bolivia throughout May.

'My first exposure to the Salar and the salt flat was the surfacing of lithium reserves in Bolivia,' says Mike Plunkett, the film's director based in New York City. 'It was on the front page of every publication,' he adds. Mike remembers seeing a photo essay in the New York Times, which drew him so much he couldn't resist taking a trip there. 'It was such a surreal and visual place that felt like a lunar landscape. If I could find a character to surround it, I thought it would be a fascinating project.'

He found Moises, a salero, or salt harvester, hailing from the village of Colchani, now a popular tourist destination. The movie depicts Moises’ simple life, dedicated to hard-work and family. His problems mount when the government begins lithium extraction and salt prices crash, forcing him to realise that his way of life may have become obsolete. For years, Mike had been following Moises’ story, giving him ample time to develop his own relationship with the Salar.

'I hadn't experienced anything like it,' Mike recounts. 'If I had to compare it with something, it would be like going out in a boat way into the ocean. It's really disorienting and hard to judge distance, and it became immediately apparent that if we were going to do this story there was a lot to learn and discover.' Despite the amount of time he and his crew spent on the Salar, there was a new sense of awe with every day of filming, especially when Mike decided to spend some time alone with the salt.

'Our producer, Noah Block-Harley, and our guide dropped me off for around three hours to do a time-lapse alone, in the middle of the salt flat. If you don't have anything else around you, it's completely silent, there's no life, no wind, nothing,' Mike remembers. 'It's unsettling, because you're alone with yourself and there's no way to escape that. I started talking out loud, shouting and rambling for three hours,' he says, chuckling slightly at the memory. 'When I got back, I realised that the sound on the camera was actually recording the whole time. I have since deleted those audio files.'

Mike and Noah remember when some French tourists were trapped out on the Salar after their car collapsed into the salt crust. One walked to the edge of the Salar to find help. 'When she reached us she was almost delirious,' Mike recalls. 'Moises and his brother had to drive out and save them. People can really die out there, because it's so easy to get lost.'

The bizarrity of these experiences tells of the contradictory feeling the Salar can produce in those who encounter its vastness on their own. It can simultaneously make you feel as if you are the biggest thing in the world and the smallest thing in the universe. 'It's both frightening and empowering,’ Mike says. ‘I've never felt that way before. It's more different than anywhere else I've ever been to, in terms of the way it affected me.'

'I was out there for hours...It's unsettling because you're alone with yourself and there's no way to escape that.' – Mike Plunkett

The experience of the crew, who were not just taking in the Salar as tourists, demonstrates just how perilous and breathtaking it can be, even after six or seven visits. They show that it does not matter who you are or where you're from, this vast and beautiful landscape can make you lose faith in your senses.

The feature 'Salero' will be screened in various parts of Bolivia throughout the month of May.