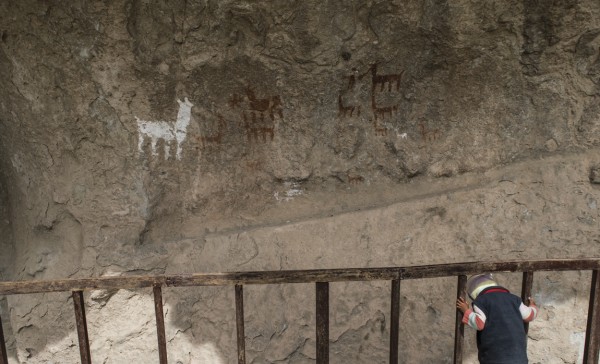 Cala Cala, a small, nondescript pueblo 21 kilometres south- east of the city of Oruro, boasts an extremely rich archaeological inheritance. Two kilometres outside of town is a geological site adorned with cave paintings. Also named Cala Cala - Aymara for ‘Rock Rock’ - the site, at an altitude of 4,050 metres, was declared a national monument by the Bolivian state in 1970.

The paintings at Cala Cala are depictions of llamas and human figures, and it’s generally accepted that sacrificial rites were performed at the site, which comprises a small cave and rock shelter. The style of painting that the ancient artists used to portray humans and llamas is systematic: the same shades of colour are used for each corresponding type of figure. All the colours are presumably created from minerals available in the surrounding area: the red shades are possibly derived from haematite or limonite, black from manganese and white from kaolin or ground calcite. Freddy Taboada Tellez of the Bolivian Rock Art Research Society, however, asserts that chemical analysis has not yet been performed to determine the exact composition of the paint.

As is usual in cave art, there are no ground lines representing the earth, nor a painted background. Their absence means that the viewer cannot ascertain if the figures are flying in midair or arranged in narrative sequence. Nevertheless, we can still read and understand the images. A white llama dominates one of the figure groups and has been identified by the Bradshaw Foundation, an online archaeological learning resource, as playing a sacrificial role in indigenous rites. Taboada also explains that the other, smaller llamas surround the white llama because it is a superior being, that the white llama holds a sacred power.

In 1976, the Bolivian National Archaeological Institute fenced in a small area of land in order to protect the cave and rockshelter. After the construction, the National Anthropological Museum in Oruro took on the maintenance of the archaeological park, with the duty later being passed on to the town hall of Surakachi.

Although both archaeologists and scientists alike cannot be certain who made the cave paintings, carbon-14 dating, along with studies performed by archaeologists Carlos Ponce Sanginés and Gonzalo Figueroa García Huidobro, has revealed that they were most likely made by the Wankarani. These people lived approximately from 1800 BC - 500 AD, with their culture ending when it was absorbed into the Tiwanaku empire.

Discovered by the archaeologist Luis Guerra Gutiérrez in 1967, the paintings adorning the Cala Cala site have not yet been confidently attributed to a specific culture. The white llama panel is suspected to be Inca, while the human figures on another section of the basin (often connected to animals by a line perhaps indicating a rope), may be a self-depiction of caravaneros, according to Taboada. This aligns with the Wankarani, whose economy was based on llama herding and whose civilization predates both the Inca and Tiwanaku.

‘This is the Uturunco, a great jaguar, and a type of god of the llamas.’

The caravaneros would have followed a route from the altiplano all the way to Cochabamba, making stops at sacred sites along the way to perform rituals. These rituals would have been a form of praying for good fortune along their travels (which often lasted up to three months), and exchanging maize, coca and other produce which could not grow on the altiplano itself.

In the paintings, a jaguar is depicted, not chasing after the llamas as it would in real life (if they would ever meet; their respective habitats are and were quite different); instead, they cohabit the pictorial space. Taboada explains, ‘This is the Uturunco, a great jaguar, and a type of god of the llamas. Besides this, the Uturunco is also the god of light, el rayo.’ He says these images are infused with magic, and that for the ancient people who created them, the god was present in the image itself.

Tourist offices in Oruro offer buses and guides to visit the cave paintings at Cala Cala. The site is open daily from 10 AM to 5 PM, with the exception of Mondays and Thursdays, when it opens from 10 AM to noon. Entry is 10Bs.