The Roots of the Andes 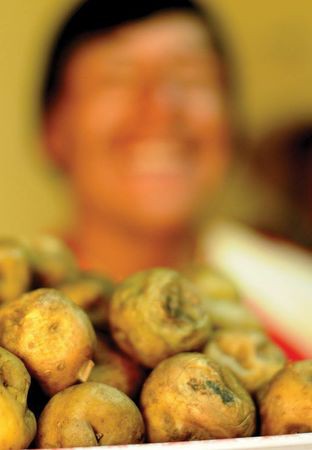 In Bolivia, culture, civilization, and the Andean market economy revolve around the cultivation of the potato.

‘All of the greatest cultures and civilizations have been built around a lake or a sustainable river’, argues Alexis Pérez, my Latin American History Professor. This is certainly the case for many villages built around Lake Titicaca —such as the Tihuanacota, Chiripa or Aymara—which also share the commonality of growing a crop which has mythic significance: the potato.

The origins of the potato crop began around 8,000 years ago near Lake Titicaca. Several thousands of years earlier, communities of hunters and gatherers populated the south of the continent. Potato plants grew in abundance in the fields around the lake, even before the settlement of the first communities.

Native stories about the potato’s origin are varied and involve everything from illas and chullpas to condor societies, or versions involving toads, foxes, and of course the lake, around which extraordinary tales take place. Cultivation of the potato has not only determined the agricultural calendar in the Andean world, but its production has been tied to the Andean cosmovision, as well as to the Pachamama, linking it with the fertility of the land and the people.

The cultivation of potatoes requires rotation and rest. That is to say, their successful harvest depends on the quantity and frequency of rain, as well as an appropriate period for the land to rest. It’s indeed possible this very practice gave origin and sense to the rotation of Mallkus , as well as to the Ayllu system.

When the colonisers arrived, work on the land owned by the community in the Ayllu began to deteriorate, and the Spanish policy of the encomienda was established, producing serious damage to the social organisation of the Andean world. This schism destabilised local spatial relations, with an ensuing weakening of the ecological organisation. The destruction of the Ayllu generated total confusion in the Andean villages.

During the Republic, different reforms were implemented. The most transcendental changes took place in 1953 after a revolution which shook the socioeconomic order of the country. The revolutionary project aimed towards indigenous civilization through processes of ‘mestización’ (hybridization), ‘castellanizacion’ (spreading of the spanish language as a lingua franca), and the parcelling off of rural land. Many traditional values were transformed in the process. The market economy took over and came to govern the production of potatoes in the Andes. This brought about a peculiarly hybrid situation, a communitarian system working on parcelled land, and subject to market commercialisation.

The subsistence of Andean population has historically relied on the cultivation of this crop. Low estimates posit that 200 varieties have been domesticated, and according to research put together during the international year of the potato in 2008, there could be as many as 5000 varieties produced in over 100 countries. According to the Institute for the Development of Rural America (IP- DRS), today the potato is the third most important crop in the human diet, after rice and wheat.

After the colonial era and successive waves of European migration, the potato reached all corners of the world. Sailors and governors of colonies were among the first to appreciate importance of this tuber, as it fed them during long journeys. Missionaries and colonisers spread the cultivation of potato to all continents, which is how it landed in Europe and Africa in the 16th Century, followed by Asia and North America in the 17th Century, and continuing on to Australia and Oceania in the 19th and 20th Centuries.

In global terms, China is currently the largest grower of potatoes, followed by Russia, India and the United States. According to the United Nations’ Food and Agriculture Organisation (FAO), 325 million tonnes of potatoes are produced each year. The world’s demand is now only owed to its nutritional properties (being a great source of calories, micro- nutrients and proteins), but due to its uses in medicine, the production of textiles and paper, as well as applications in pharmaceutical, mining and oil industries.

In Bolivia, it is not surprising to find the potato present in a large proportion of national dishes. Without her, life would be more difficult in the Andean world. No Andean family will lack potato or its derivatives such as tunta or chuño. Neither can it be absent from parties, social or public events. I ask myself, would there be an apthapi without potato? I don’t think so.

This is why the significance of the potato goes beyond its importance in the origin of Andean societies. It has been instrumental in feeding humanity as a whole. Paradoxically, colonisation allowed the potato to colonise the world, becoming one of the true legacies left by the journey Columbus embarked upon in 1492. Over five centuries later, the true riches weren’t to be found in the gold which colonisers so recklessly sought. The true, renewable wealth of the land was to be found underneath the earth and initially hidden to their eyes: the potato.

Translated from the Spanish by Alexandra Meleán