The Rise of Bolivia’s Youth 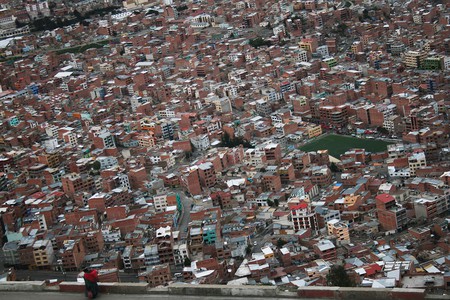 As the country’s young population ages into the workforce, can the government provide employment and training?

Strolling—or, rather, panting—up Avenida Montes from Plaza San Francisco towards the highway to El Alto one recent early afternoon, I came across gradually larger groups of school-age children in impressively consistent uniforms. My best guess was that La Paz’s Escuela Militar del Ejército had just finished another school day, but what struck me most was that these groups of young people were large enough to make passing—on the largest boulevard I’d seen since arriving in Bolivia—difficult, and they just kept coming.

Bolivia has an overwhelmingly and disproportionately young populace. More than 4 million of the country's 10 million–strong population was 19 or younger in 2010, according to the National Institute of Statistics (INE). In contrast, the UK's 2011 census found just 23.9 percent of its population in that same age bracket. Bolivian population trends are anomalistic within South America, too.
For example, only 27.7 percent of Colombia's population was 14 or younger in 2013 (compared with 35 percent in Bolivia), according to the United Nations’ “World Population Prospect”.

This poses an economic challenge for Bolivia: With an estimated 120,000 young people entering the labour market each year, the formal employment sector can only provide work for a third of them. At the same time, however, Bolivia's adult population continues to age, primarily as a result of a steadily increasing life expectancy. And with over half of Bolivians over 60 living in poverty, how can the working-age citizenry support even the minimal assistance offered by the state to this vulnerable group of people? Can the Bolivian government cope as the composition of its population increasingly means too few opportunities for those who can work, an increased need for quality education, and an increasing commitment to its older citizens?

In December 2010, President Evo Morales introduced a new pension scheme for Bolivians. This not only reduced the retirement age from 65 to 58 (and to 55 for women with three or more living children), but also promised those who are informally self-employed (who account for 60 percent of the Bolivian workforce) the opportunity to invest in the state pension. This goes against current global trends of raising retirement ages and restricting state pensions. Indeed, it was met with much criticism by those who said the policy was unsustainable.

Government officials justified the policy by explaining that the harsh nature of much Bolivian employment means people are less able to work as they grow older. Ministers also defended the move by highlighting Bolivia's relatively low average life expectancy of 66.9 years (65.1 for men and 69.2 for women, according to the World Health Organisation), arguing that a lower retirement age therefore makes sense. But with the World Bank predicting an average Bolivian lifespan of over 70 years by 2020, will the policy prove a strain on the country’s economy?

Patricia Urquieta, a researcher at CIDES—a research division of the San Andrés University that specialises in development sciences—told Bolivian Express that the elderly population is not entirely dependent: ‘The older adult population is not passive—they fulfil many functions.’
For example, Urqueta highlighted the way in which many grandparents, in addition to working in small stores, provide childcare for their grandchildren. In this way, they provide much needed services for the working-age members of the family, allowing them to work and, as is sometimes necessary, travel to do so. Though the ageing population has this integral social role, it doesn’t obviate the state’s need to provide assistance to the elderly.

In a recent interview with El Sol de Santa Cruz, the director of Renacer—a charity that promotes the interests of the elderly in Bolivia—proclaimed that ‘Santa Cruz needs a geriatric hospital.’ It is perhaps the provision and extension of these sorts of supportive infrastructures and facilities that future governments must prioritise in order to ensure the health and security of the growing elderly population.

Further complicating the issue, ageing does not take place homogeneously across the country. There is a key distinction to be made between a ‘biologically ageing’ population, one whose average age is increasing, and a ‘socially and demographically ageing’ population, one in which social trends begin to parallel such biological divisions. In an interview with BX, René Pereira, the director of San Andrés University's social sciences faculty, spoke of the way in which the dominant young population is migrating in large numbers to cities and leaving behind concentrated rural areas of the elderly, what he calls ‘the most vulnerable population’. This is something future governments must acknowledge, said Pereira—populations of elderly people without access to any kind of insurance or familial support.

For future governments, Pereira recommends a strong focus on education. ‘Bolivia must diversify’, he said, and the best future policies should focus on ‘productive transformation’, which will allow the country to become more prosperous. This, according to Pereira, is how the government can best accommodate the two-thirds of 120,000 young people new to the labour force and without work each year.

Indeed, Urqueta said that ‘a great challenge for future governments is the formation of policies that are more productive of work’, and providing education that prepares people for work. However challenging the composition of Bolivia's population may be, Urqueta reaffirmed that 'this is an entirely positive thing'. Such a large working-age population, augmented with workplace training and education, can surely be a good thing.