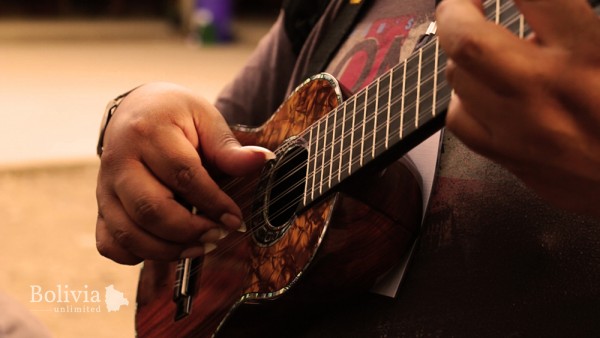 The Aiquile International Charango Festival celebrates the cultural heritage of a musical companion present through hardships and happiness.

Buena onda is a good way to describe the people of the small central Bolivian city of Aiquile and their annual international charango festival, which celebrates and pays tribute to the cultural heritage of the small but powerfully iconic traditional Andean stringed instrument. Situated among the southern Quechua-speaking valleys of the diverse Cochabamba department, the ‘Capital of Charango’ is known for its dry climate, chicha, earthquakes, meteorites and, above all, its excellence in charango fabrication.

Combined with a familiar, friendly small-town feel, Aiquile’s charango festival greets us with a warm, relaxed vibe as we arrive in the blissfully beer-inviting mid-afternoon heat ahead of the closing night of the 34th annual celebration. Festivalgoers move around in trickles and spurts after the charango-playing competitions the night before and with the Gran Peña de las Peñas still to come in the evening.

The all-ages appeal of the charango is on show not only in the various age categories of the previous night’s competitions, but also with the youngsters who can be found enthusiastically strumming and picking the stringed instruments around town.

‘Music needs to be better supported in Bolivia,’ says paceño musician Rodolfo Ramírez Paredes. He speaks of the amazing ‘feel, technique and precision’ of some of these young charanguistas in attendance, some of whom nevertheless had difficulty in obtaining school permission to come to this year’s charango festival. Their predicament is evocative of the song ‘Niño Rebelde’, by the Quechuan group Norte de Potosí, in which a father asks his son what he wants to be when he is older and responds in repeated disbelief and protestation when the son maintains that he wants to be an artist, simply because he ‘likes it.’

Youngsters can be found enthusiastically strumming and picking the stringed instruments around town.

At the other end of the age spectrum, Walter Montero is exhibiting his ornately crafted charangos in the stalls next to the Manuel de Ugarte school stadium, where the festival’s main stage is set up. The former bandmate, friend and charango-making disciple of late virtuoso Bolivian charanguista and master craftsman Mauro Núñez, Montero is one of several master luthiers whose handiwork is on show for festivalgoers wishing to purchase a handmade instrument.

Later on in the evening, after the gentle lull of the afternoon has given way to the slowly simmering excitement of an impending barn dance, Kuwabara is duly given a barn-raising reception as he accepts his award on the main stage. Kuwabara, who initially started learning the charango from a maestro in his native Japan before moving to Bolivia, is ‘very happy’ with both prize and reception, as are aiquileños and Bolivians alike with the growing international presence at the festival, due to the uniting influence of the charango.

Then, as the last of the orange twilight finally surrenders to night and the bright stadium lights, I make the rounds to find out how festivalgoers feel about this year’s edition of the festival, with a key theme among locals being ‘pride.’ Pride for a celebration that recognises the importance of an instrument so well made and culturally ingrained in Aiquile over the years that – although Potosí is considered the birthplace of charango (due to indigenous potosinos creating the vihuela-inspired instrument during the Spanish conquest and the instrument’s vital place in the campesino culture of the region) – it is Aiquile that is known as the ‘Capital of Charango.’

Aiquileños have pride that their event is becoming an ever bigger, better and more culturally diverse festival in which to share and continue spreading all that encompasses the charango – and pride that this is a feelgood festival where people can come to listen to good music and pasarla bien.

‘The festival is well organised and getting better,’ says one aiquileño. ‘This year there are more people, I feel proud.’

‘It’s better than other years,’ says another. ‘There are more participants and more people.’

‘The festival is moving forward and we feel good about this. More visitors are welcome,’ says an aiquileño charango luthier, who also mentions that visitors to the charango festival are ‘very respectful.’

Aiquile is known as the ‘Capital of Charango.’

Finally, as the awards ceremony wraps up some time before midnight and the Gran Peña de las Peñas begins, we are treated to the spectacular force of Dalmiro Cuellar and his band: charango, guitars, violins, drum kit, an extravagantly played bombo, bass and chaqueño rancher spirit in full flow. An invigorating, fist-pumping rendition of the Tinku classic ‘Celia’ is the highlight of a fun and energetic set. Los Kory Huayras follow, and the warm night becomes blurry as crates of beer continue to be delivered to tables, kegs of chicha appear on the dance floor and revellers continue until 6am, when the police eventually kick them out.