THE MAN WITH THE CITY ON HIS BACK 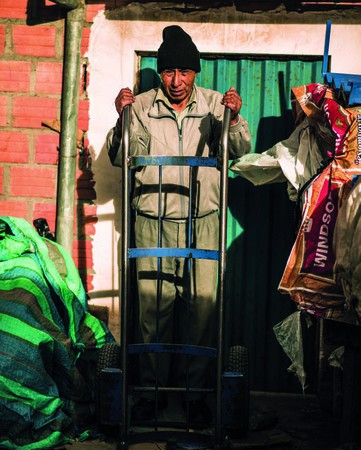 Aparapita is the name given to the hundreds men who carry huge loads for a living across the city’s main commercial arteries. Wilmer Machaca talks to two different generations of these personages to understand whether there’s a future for this mythical urban character.

The Max Paredes macro-district without a doubt contains some of the clearest displays of La Paz’s character and spirit. It not only feeds from a living past, but continues to renew itself without losing its essence. In this economic quarter of the city, life begins at early hours of the morning and ends with the first lights of dawn.

The variety and volume of commerce in the Max Paredes is unrivalled across La Paz. Streets such as Huyustus, Graneros, Garcilazo de la Vega, Isaac Tamayo, Tumusla, Eloy Salmon, Rodríguez, Churubamba and Gallardo offer us everything from clothes, electrical appliances, food, animals, stationery, hardware and medicinal remedies. These districts bring idiosyncratic order to the chaotic panorama which pervades across this part of the city 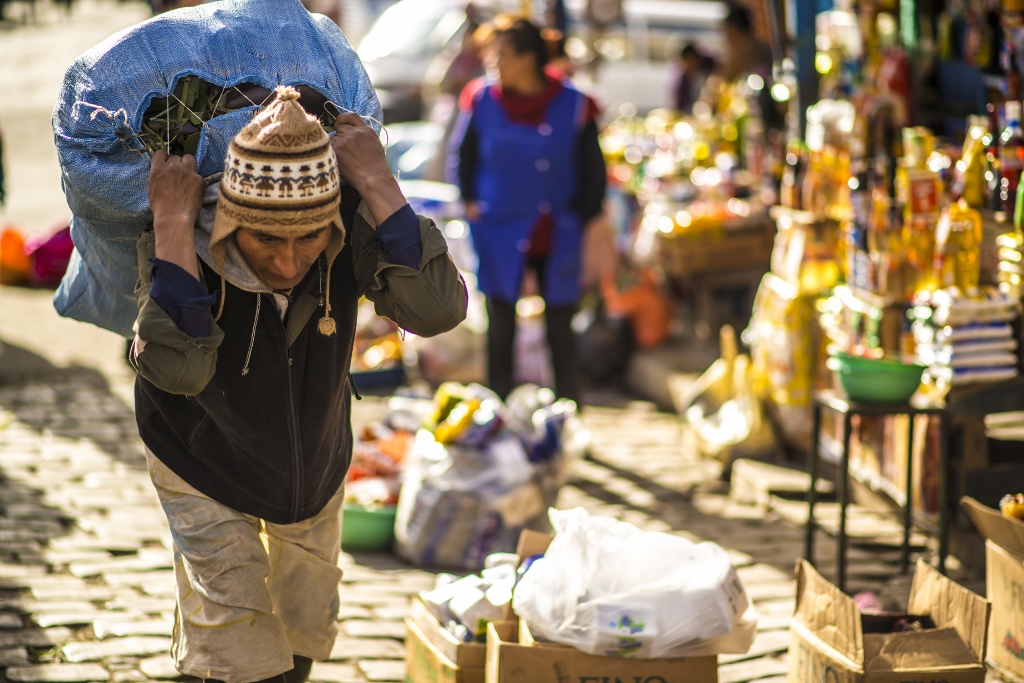 Its streets are populated by several illustrious characters: food ladies, peddlers, chalequeros, anticucheras , knife sharpeners, pajpakus , and aparapitas.
The mythic aparapitas have served as an inspiration to many. There’s a museum that carries their name, and through the prose and poetry of Jaime Saenz they have become immortalised in the popular imagination. David Mondaca later transported them to theatrical plays, and even the local band Atajo wrote about their sorrows in their songs.

As a paceño born and raised in this cold and noisy city I have always naturally cohabited with these characters without reflecting on them or their historical significance. Through reading Sáenz I learned about this underwordly inhabitant of the city, often caught in the twin vices of alcohol and coca. Saenz believed the aparapita held the key to understanding the true spirit of the city. Today, I don’t believe Saenz’s representation of the aparapita represents him well.

Behind them are the long distances they had to travel with heavy loads on their backs. Today, the cargadores, as they are also known, are organised in fixed shifts and places, where their services are sought. Their routes have been shortened, not only in length but also in number. Their way of working has been transformed by wheeled carts which have lightened the burden of the loads they have to carry.
I met with Don Lucio Quispe Mamani, a 65 year-old Achacachi native who works on the Pasaje Ortega, where he has been working for over 40 years; longer than any of his fellow aparapitas. 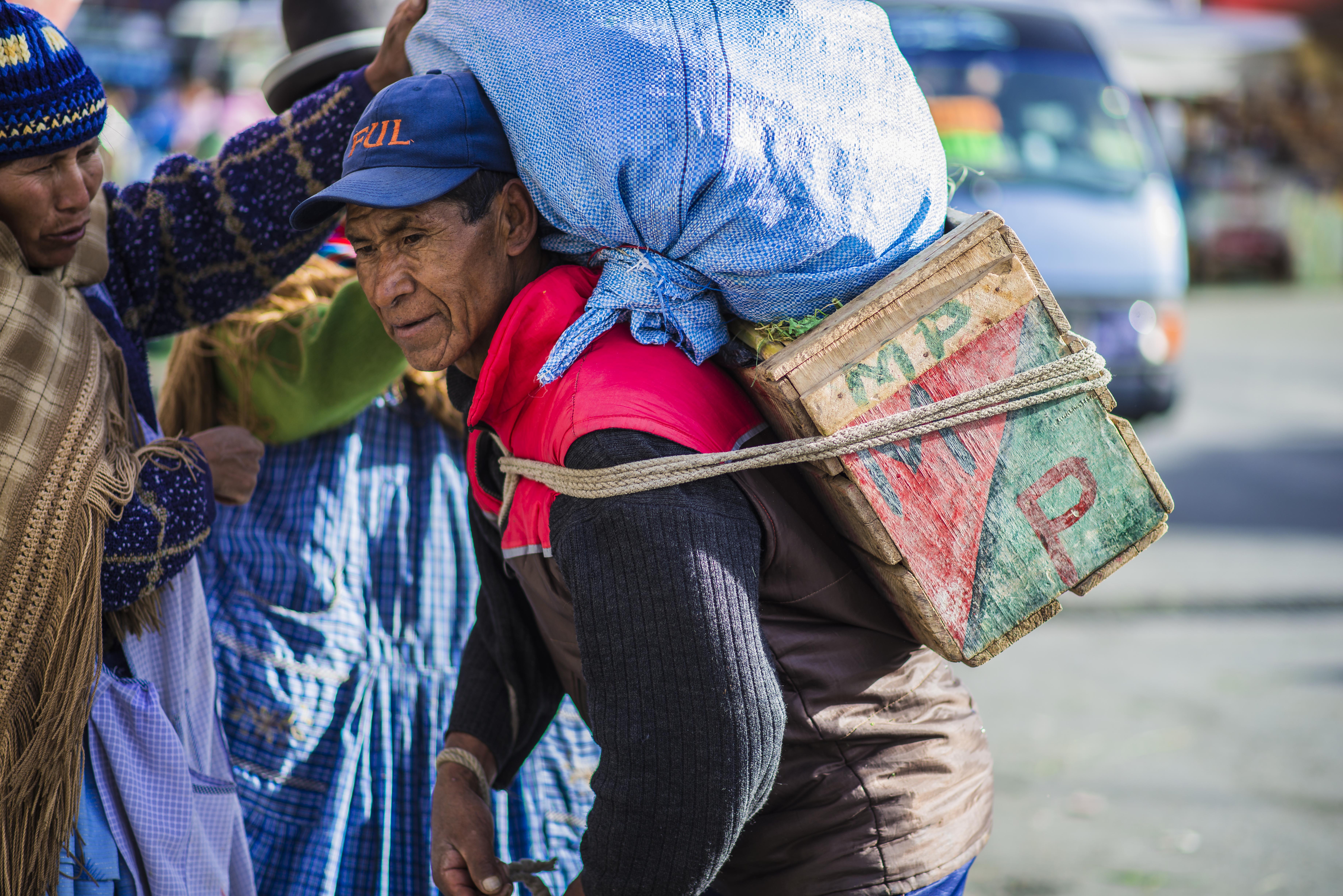 During my visit to Max Paredes I was able to see three types of aparapitas: those who are contracted by merchants to move loads from and to their stalls in the mornings and evenings; those who stay near the shops throughout the day, carrying furniture or heavy electrical appliances for customers to taxis and trucks; and those known as runners, who accompany shoppers throughout the market as they collect various goods.
Those in the first category make up the majority, perhaps due to the stability of their employment. They are organised in syndicates and take part in various challenges and football championships against aparapitas from other streets.

I also met Severo Catari Vilca, a 42 year old aparapita from Provincia Omasuyos who worked in Mercado Rodriguez for 20 years and has been at Pasaje Ortega for the past 5 years. As Don Severo tells me, they have also united to conform a communal organisation to let and sublet storage depots. The rent per load is Bs 5, and that each aparapita is in charge of around 50 of these. The cost to carry a load from or to the depot is Bs 3. Severo is currently responsible for carrying 30 of these, but points out that some reach 50 to 70, adding that “knees and lungs” are the main mechanism used to understand one’s limits.

Severo is a short-statured Aymara with a sturdy build. As one of several siblings, he arrived in the city at the age of 17, driven by the poverty his family was going through in his community. He worked for a time as a plasterer but his main activity has always been carrying loads. He only works as an aparapita during the early mornings and late evenings, seven days a week without a rest. He spends the hours in between working in his locksmith’s shop in El Alto, a responsibility he shares with his brother.

Severo is now married and has two sons. After working in the area for several years, he found a spot for his wife in Mercado Rodriguez. Severo reflects on how things have changed in his line of work, not just due to the carts, but with the presence of security guards who are paid by stall owners to guard their goods throughout the night, meaning they don’t have to transport their wares to or from depots, and therefore don’t need to hire aparapitas. Their number has been reduced from 50 down to 20 in the Pasaje Ortega, something we see repeated across all commercial arteries. As Don Lucio points out “now everyone wants to leave their bultos”. The wooden stands and chiwiñas are being replaced by metallic structures and in some cases have been turned into closed booths.

Neither Lucio nor Severo are optimistic regarding the future of their occupations. They know that in some moment their services will become redundant. Don Severo tells me that several merchants on the Calle Ortega hired him to modify the structure of their stalls from wood to metal; perhaps ironically Severo himself has contributed to the disappearance of the job which has given him so much in his life. There’s a question mark over the continued existence of this local character; it’s likely the next few years will either see a disappearance of deeper transformation of their jobs towards further opportunities to renew themselves. 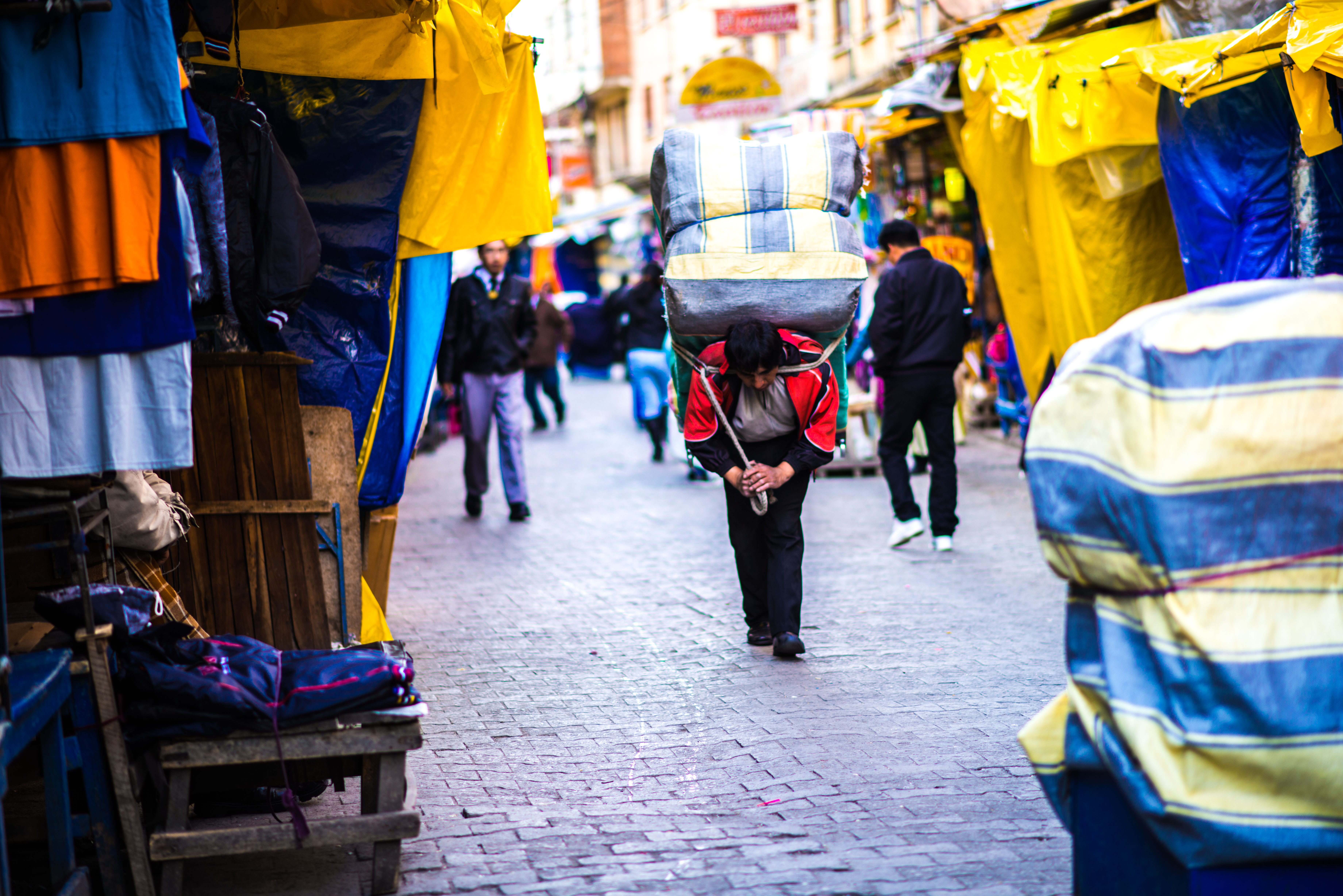 Jaime Saenz - El Aparapita de La Paz (1968)
“He is considered a larva, an isolated phenomenon en route to disappearance, engulfed by progress, or who knows why. Necessarily a typical example of underdevelopment, but by no means a parasite [...] A figure emerges suggesting contradictory readings, of abandon and destruction, of calmness, death, joy, arrogance and humility
“He defends himself with his occupation, and doesn’t depart from this independence. He only works when he feels like it and so long as he has gathered enough money for liqueur and coca, he doesn’t care about the rest. He remains, ensconced against a wall, turned into a prince with his rope and carrying-cloth on his side, his only possessions. He watches life from afar, and he chews, and chews the coca”
“One envies the aparapita, that unattainable simplicity, that sovereign lack of concern [...] during his delirious transit through the streets of the city, the aparapita leaves in his wake footsteps which are possibly legendary [...] “Who’s one to say whether he will take over the city. I would like my eyes to see what I see: it’s him, it’s the city assimilating itself, becoming the true city with the irruption of the peasant. Of the peasant who in the city became an aparapita”

Francisca Onaolapo Oladipo
09 Feb, 2020 | 08:19
We have men like these in Africa too earning an honest living with the strength of their back.