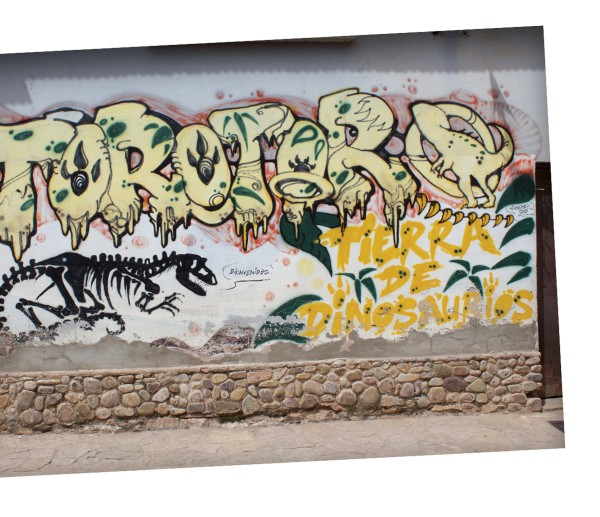 A trip back in time through the footprints of Torotoro

To best illustrate the terrain of Torotoro, my guide finds a small paperback book and lays it flat upon the bench. Then with one swift move he crumples it, leaving it a bumpy undulating sheet.

This is Torotoro. And he is right. Torotoro, a rugged upland region in the heart of Bolivia, appears almost preternatural in its jagged contours. It is a hot, dry land of plunging canyons, vast subterranean caverns and serrated mountains. The scrub-dotted hills here are not gentle mounds, but sharp, splintered escarpments. Slopes jut irregularly out of valley floors like the tierra itself has buckled and broken, vast slabs protruding at 45-degree angles from the plains. The land of Torotoro appears to be shattered and crumpled, with pueblos and granjas eking out an existence in the hollows of a broken, frightening world.

The presence of pre-Inca cave paintings, along with towering stalactites, all nestled into hoary canyons 300 meters deep, implies this startling land is ancient – that it has looked this way since time immemorial. It is only the footprints, petrified into the rock of sharply sloping hillsides, that speak of a time when the book that is Torotoro laid flat upon the bench. These fossilised footprints, at their impossible angles and bizarre locations, are of dinosaurs, and they offer a portal into the fascinating prehistory of Bolivia.

The plaza in the sleepy centre of the modern Torotoro township pays homage to the region's extinct inhabitants. Where some plazas would sport a central fountain or monument to a military martyr, here a towering turquoise bull-horned carnotaurus, flanked by swooping pterodactyls and warily watched by a feathered velociraptor, dominates the view. From hidden speakers, deep growls and hoots of a prehistoric world reverberate off the ramshackle adobe tenements that ring the square. These creatures, and many more as captivating and fearsome, once called the playa that was Torotoro their home.

Sixty-five million years ago, the region that is Torotoro was not the dry, shattered land one sees now. This inland agricultural territory was once a vast beach upon the shore of southern America. It was a coast bordered by verdant jungles, steaming deltas and thick-flowing rivers and inhabited by the denizens of a Cretaceous world.

My guide Benedicto and I trek for hours across farmland, through dried rivers and up canyons in our search for traces of this lost world. And if one knows where to look, the stone footprints of ancient life can be found. Amidst the fractured slabs of rock, one can perceive great prints where once a herd of long-necked sauropods, tails whipping 35 meters behind their heads, would have waded through the tropical shallows. Close by, the deep-set tracks of an ankylosaurus show where long ago a heavy reptile with an armoured back and a studded tail would have lumbered across the beach, ignoring the small predatory dromaeosaurs that flocked about it. These feathered raptors would have been seeking out ornithopods, the duck-billed hadrosaurs which gathered upon the shores in huge herds to feed upon lush aquatic vegetation. These dinosaurs did not find protection in physical armour, but in sheer numbers.

Whilst numbers may have daunted the sickle-clawed dromaeosaurs, it had little effect upon the huge carnosaurs that stalked the seaside jungles and deltas seeking out prey, scattering the smaller predators before their advance. For the towering carnivores, potentially related to the carnotaurus that stands vigil in Torotoro plaza, the ornithopod herds made easy meals.

In other parts of the world, one can perceive the fossils of extinct animals and behold their fearsome, skeletal visages. Yet these remains of dead things speak little of how the dinosaurs lived. But upon the sharply ascending hills of Torotoro, through the petrified footprints, one is offered a veritable photo of prehistoric life. One can see through the tracks, now wind-swept and dust-covered, the dramas that played out daily in the lives of the extinct inhabitants of Bolivia.

My guide informs me that these fossilised tracks all stem from one day in Cretaceous Bolivia, whereupon certain conditions facilitated the incredibly rare process of footprint fossilisation. But what happened? A sudden deposit of sediment must have covered the beach and the ocean shallows and swiftly hardened, preserving the tracks beneath. An engorged river? A landslide? Ash fallout from a volcanic eruption? Benedicto and the other guides have a different theory.

The footprints of Torotoro may be a snapshot of the final day of the dinosaurs. Sixty-five million years ago, a meteorite impacted with the Earth where the Yucatan Peninsula stands today, throwing debris into the atmosphere and triggering worldwide volcanic eruptions that would ultimately end the reign of the dinosaurs. Here at Torotoro, my guide believes one can see how the dinosaurs, oblivious to their impending fate, lived their final day, hunting and drinking upon a tropical beach, moments before a rock dropped from space. This extraterrestrial impact erased the dinosaurs from existence, but miraculously preserved their footprints – the stories of that ultimate day in the world of the dinosaurs not lost but preserved for millennia below sediment thrown up by the very asteroid that destroyed them.

Whatever the cause for the preservation of the footprints, they offer today’s travellers a unique snapshot of a time in Torotoro before the land was dry and high, broken and mountainous. A time when dinosaurs were not found in sleepy plazas as fibreglass figures, but upon a long-ago vibrant beach where they hunted, fed and lived. 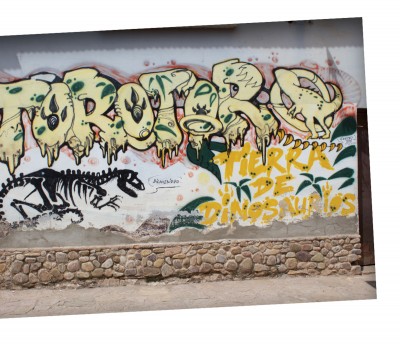