The Living Skulls of the Dead 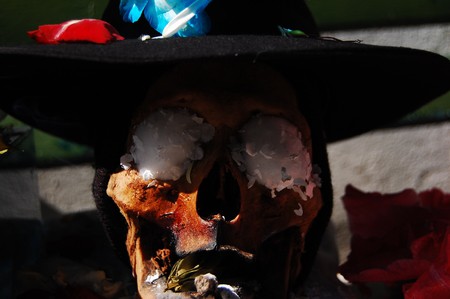 The ritual practice of keeping, adorning, and paying homage to human skulls, known as ñatitas, is a Bolivian tradition whose origins are hotly debated. It is widely believed that in return for cigarettes, coca leaves, flowers, candles, and other adornments, these craniums provide protection and good fortune for its surrogate owners.

Common lore has it that this tradition stems from the pre-Incan civilisation of Tiahuanaco. In the past, not only did chieftains and high-ranking warriors keep skulls of defeated enemies retained as trophies, but those of deceased family members were kept and cared for. However, art historian Pedro Querejazu contends that the ñatitas ‘craze’ is not as ancient as people might think, indicating that the tradition’s origins are post-colonial.

Living with the Dead

Here in Bolivia, laying out a collection of human skulls like curious knick-knacks on your living room shelves is far from other-worldly. In fact, that is exactly what I encountered at Doña Eli’s house in the north of La Paz, well known in her neighbourhood for her extensive collection of skulls and her psychic abilities. She was kind enough to grant us an interview, or as she put it, an ‘introduction to her children’.

With macabre familiarity, these skulls reside in familial harmony with their owners. The word ñatita, is an affectionate reference to the appearance of the nose bone of the skull, literally meaning ‘the little pug-nosed one’. Often, the skulls are put into pairs or groups so that they can form bonds of friendship with each other. Some even get married. Many owners organise huge parties, known as prestes, in their honour, which involve offerings of food, drink and dance. 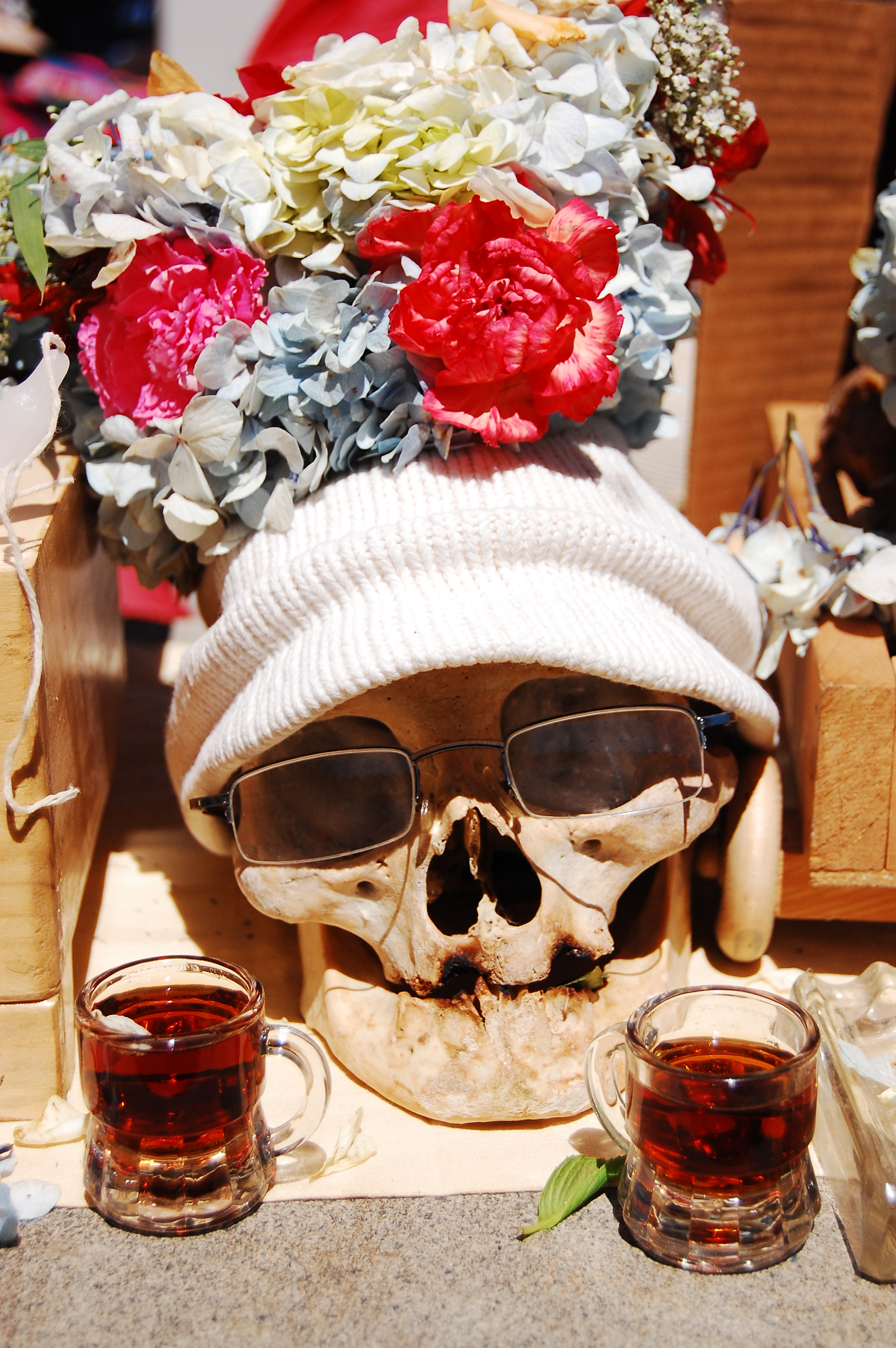 Doña Eli firmly believes that she owes her health and livelihood to her ‘babies’, as she refers to her 53 skulls. Everything in her house revolves around the ñatitas. The shelves of skulls take up a whole wall, not to mention the ñatita-related posters and photographs of her collection. Each skull sports its own personalised hand-made hat, which, as Doña Eli explains wryly, is absolutely essential for her to differentiate them. This altar is dimly lit by offerings of candles and adorned with flowers. Far from being exclusively beneficial to her and her family, Doña Eli explains that ‘they are friends with everyone’.

This becomes apparent during the interview, with a steady stream of people coming through her curtain door in order to provide offerings for the ñatitas. ‘One man even brought a television!’ she exclaims.

The skulls, she explained, came from various places; gifts, inheritance, purchases, each with its own name and story. ‘I have lawyers, police, lovers, even millionaires here on my shelf’, she laughs, ‘and they each have their own character’. She even has several tiny skulls of infants, which hold pride of place on the shelf. Doña Eli tells us they are especially helpful to women who are trying for a baby.

When asked as to why she had amassed such a collection, Doña Eli told us that she had been born with a psychic gift, which manifested itself when she was about 8 or 9, and that she uses the spiritual energy of the ñatitas to help her. She also tells us that through these skulls she is able to communicate directly with the souls of the departed.

Eli calls herself an ‘instrument’ of God, who works through her: she claims no power of her own. She works both with her faith in God and her faith in her ñatitas in order to help others, but firmly states that she only works for good. ‘People who come with faith and love’, she tells us, ‘are the only people I can help’. Indeed, she recounts with disgust a case of several men who had recently come to her requesting that her ñatitas cause the death of the president. She adamantly refused their offer of a large sum of money, imploring us to understand that her skulls were only ‘a force for good’. 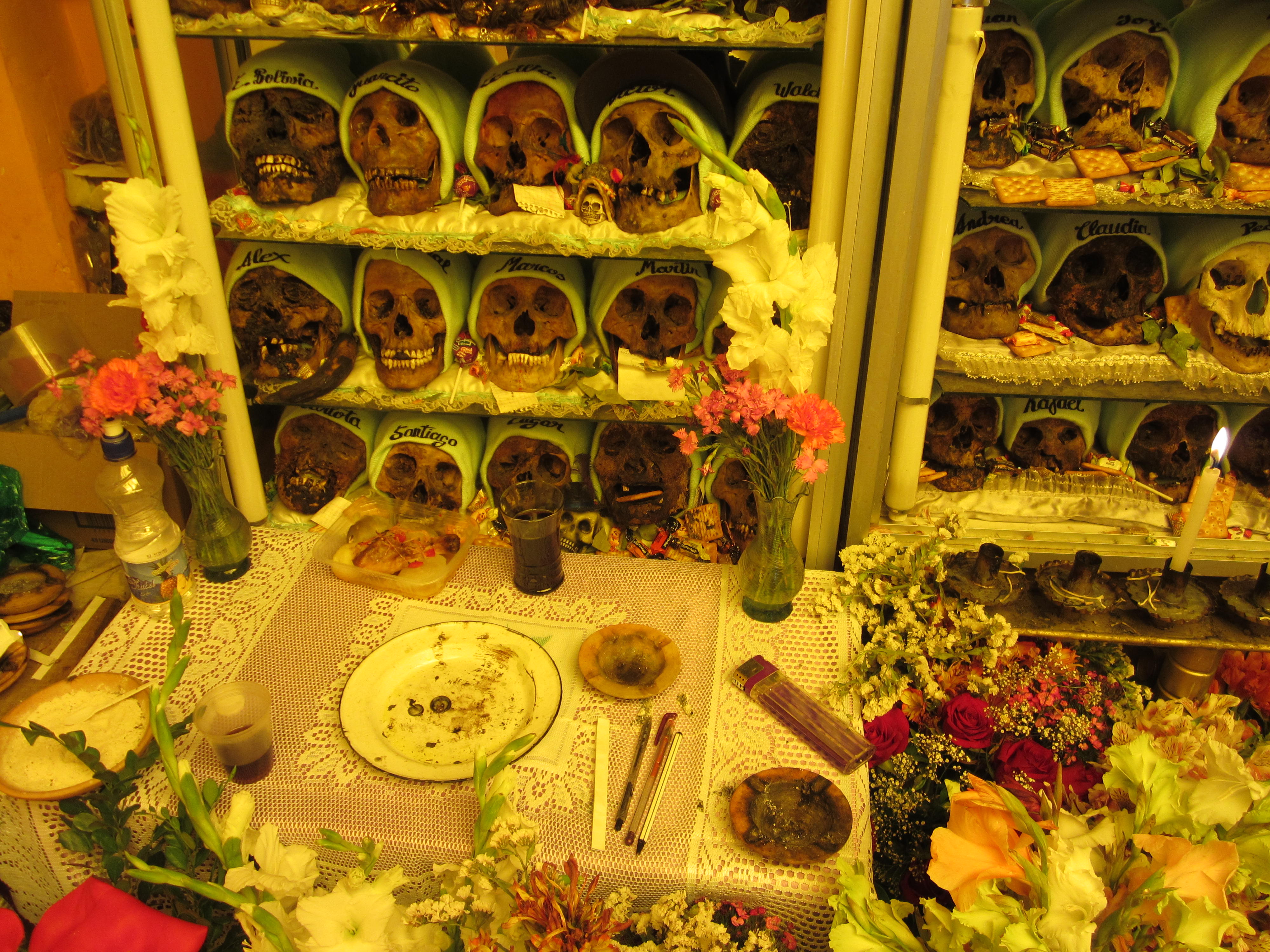 The Homicide Department of the police force in El Alto have been widely reported to use two ñatitas: Juanito and Juanita to help solve hard cases. Fausto Téllez, a former head of this department believes that the consequences of lying to a ñatita may, in the criminal’s eyes, outweigh potential judicial punishment. It is even rumoured the police force use the skull of former president Mariano Melgarejo, who serves as a special advisor (turn to page 14 to learn more about his life and death). Yet ñatitas do not only work for the forces of good. Doña Nancy, a caserita who works outside the Cementerio Heroes del Gas in El Alto told BX that many criminals own skulls, and implore them to bring luck and provide protection from the police in their criminal pursuits.

There are a number of ways of acquiring a ñatita. They can be inherited, given as gifts, obtained from the black market, cemeteries and even morgues. Milton Eyzaguirre Morales, an anthropologist at the Museo Nacional de Etnografía y Folklore, claims it is common for cemetery workers to rob skulls from graves, when relatives either abandon their dead or stop paying cemetery bills. ‘It's illegal,’ he says, ‘but officials turn a blind eye to it’. The idea is that these are almitas which have been lost or abandoned by their owners, and who are in search of new living companions to care for them. In return, these souls lend favours and care for their new keepers. Their acquisition can most accurately be described as an adoption of sorts.

This tradition has grown substantially over the last decades, going against the expected eradication of indigenous traditions by Catholicism and modernity. Their increased acceptance and popularity is partly due to the ceaseless stream of migration to La Paz and El Alto from the countryside, strengthening the position of traditionally indigenous rites in an urban environment. Belief in the abilities of these skulls are prevalent in many different social sectors of La Paz; not only among indigenous communities, but also, for example, among medical students and urban social groups associated with merchants, salespeople, and transport workers.

In contrast to the imagery associated with skulls in most Western cultures -traditionally linked to images of doom, gloom and evil- the ñatitas teach us a social way of relating to the dead rooted in reciprocity, companionship and celebration. The deceased which these skulls embody seem to belong in a different realm of the dead, a realm which maintains everyday contact with the living. As Don Simón told BX, while proudly displaying his bespectacled ñatita at the cemetery: ‘we keep Claudio on the mantlepiece in our bedroom because he is part of the family’. Unlike the souls of the countless skeletons in mausolea in the cemetery who are only offered flowers and gifts on special occasions throughout the year such as Todos Santos, these ñatitas accompany their keepers every day, and in return their surrogate-owners make them feel loved and at home. ‘How would you feel if no-one cared for you?’, Don Simón asks. ‘It’s our responsibility to the dead, it’s our duty’.

There is no better example of the affectionate revering of the skulls than the annual ‘Fiesta de Las Ñatitas’. Every 8th of November the skulls are carried in their hundreds to the general cemetery of La Paz, where passers-by are invited to offer prayers to the ñatitas. Many of them bring crowns of flowers and gifts in return for favours. The general mood is festive and celebratory, with musicians playing upbeat morenadas and cumbias in contrast to the sombre huayños and boleros which dominate the festivities of Todos Santos, which takes place the preceding week.

On this day, the cemetery chapel holds several masses for the ñatitas. This demonstrates the amalgamation between Catholicism and indigenous beliefs that has allowed this practice to thrive in recent years. In the past, the fiesta was celebrated clandestinely for fear of repression, but nowadays thousands of practising Catholics of indigenous roots get their skulls blessed by a priest. The fiesta has changed into a pagan-religious festival: a product of the syncretism between ancient Andean traditions and Catholicism.