The Islamic Republic of Bolivia 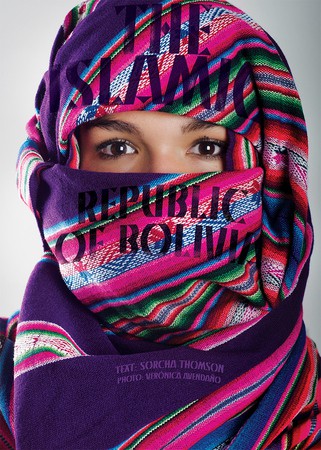 In his 2010 visit to Iran, Evo Morales asserted that Bolivia and the Islamic Republic share an ‘identical revolutionary conscience’, aimed at fighting imperialism and injustice in the world. Bolivia’s expulsion of all USAID operations in May 2013 signalled a new era of international relations, in which Iran has become the primary patron of Morales’ Estado Plurinacional, with the promise of $1.1 billion in aid and infrastructure. Media reports of hospitals in which the nurses are forced to wear the hijab and mushrooming fundamentalist Islamic cells prompted Sorcha Thomson to investigate the reality of the ‘Islamic menace’ in La Paz.

The focus of the international media melée has been the Iranian Red Crescent Hospital in El Alto, the satellite city to La Paz, where poverty is endemic and, according to Olivier Javanpour of the Jerusalem Post, conditions exist that make it one of the ‘prime targets for fundamentalists and fanatics of all kinds’. On entering the hospital, I am greeted at reception by the gaze of Hassan Rouhani, current president of Iran, framed in gold above the desk. It appears that politics were not left in the waiting room.

However, in speaking with the head of the hospital, Mr Hassani, it becomes clear that for the staff and patients alike, the macro-politics of international relations are of no concern: ‘Here we don’t care about politics, we don’t care about religion, we don’t care about any issue which is going to jeopardise our principles. Our job is to help the people and that is all.’ And, in doing this, the $2.5 million hospital has been highly successful. In its four years of operation, it has provided advanced healthcare to thousands of Bolivians, including dental care, maternity care, and the use of a potentially life-saving haemodialysis machine. The nurses dress in traditional scrubs, and the only hijab to be seen is worn by one of the Iranian nurses offering her specialist services to the hospital. It seems the relationship between Iran and Bolivia is bringing genuine aid to Bolivian people; it is difficult to reconcile the media’s hyperbolic concerns with the tangible evidence of benefit.

Perhaps reports of the growth of fundamentalist Islamic cells, funded by the Iranian government, are more accurate. Bolivia, a country of approximately 10.5 million people, has a Muslim population of just 2,000. Nora Zimmett, of Fox News USA, writes that ‘the connection between some of the community’s religious leaders and Iran . . . has U.S. officials and terror experts keeping a watchful eye on them’.

Visiting the Association of the Islamic Community of Bolivia, this watchful eye appears to look in vain. Members aged 17 to 70 gather every Friday to pray together in this small mosque in the centre of La Paz. In operation for almost 20 years, the association has seen numerous changes in government and witnessed the shift in Bolivian relations from the United States to Iran. The majority of attendees here are Bolivian converts to Islam; they see no difficulty in mixing their Bolivian and Muslim identities. For the General Secretary of the association, Ibrahim Barbery, macro-politics are of little significance to his faith: ‘We don’t involve ourselves in politics. Whoever the president, we have to practice our religion. We respect the laws. What we ask is that they respect our religion’.

However, native Bolivian Lucio Perez, aged 24, has witnessed the collapse of this mutual respect. On the streets of La Paz, he sees Bolivian-Muslim women told to ‘go back to their country’ and denounced as ‘terrorists’. It is these instances that inspire the mission of the association, voiced by Ibrahim: ‘To clean the image that other people have about Islam: most people think we are terrorists or something like that, but the reality is another thing. We are trying to give people the correct image of Islam’. Having been welcomed into this diverse and astute Islamic community, I see that the spectre of ominous Iranian cultural imposition on the people of Bolivia appears unfounded.

Morales’ relations with Iran have sparked international concern about the implications of Iranian aid and the growth of Islamic culture in Bolivia. Yet, from the ground, it appears that politics fail to intrude upon the humanitarian goals of the Iranian hospital and the spirituality of the Bolivian-Muslim community.

However, as the history of international aid attests, there is no such thing as a free hospital. The pattern of exploitation and cultural imposition is too entrenched to ignore. While the media frenzy can be dismissed as hyperbole, it would be foolish to ignore the potential benefits that lie underground for this Iranian aid: beneath the Bolivian salt flats are 70 percent of the world’s lithium reserves. With Bolivia’s troubled history of natural resource extraction, the indigenous president has vowed that this time the riches stay in the country. But, in 2010, the Iranian Minister of Industry, Ali-Akbar Mehrabian, announced a deal to help the Andean nation conduct research on the exploitation of this high-profit mineral. With lithium’s spectrum of potential, from the production of car batteries to nuclear weaponry, the courtship between Bolivia and Iran is certain to remain one of international interest.

For the staff at the Red Crescent Hospital and the members of the Islamic community, politics is a topic they choose to ignore. But it will be politics, and its ubiquitous relationship with aid and religion, that will continue to knock on their door.