The homes of the homeless 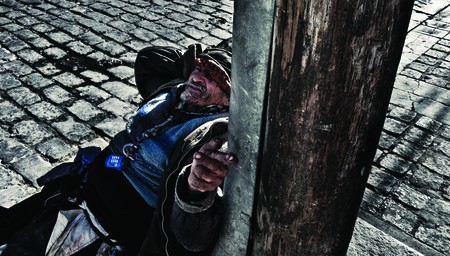 As night-time begins to envelop the streets of La Paz, thousands of street children, many of them shoeshiners, sense opportunity and danger in equal measure. When one considers the manifold threats they have to grapple with, from freezing temperatures to violence and drug dependency, it is astonishing that so many street children survive to adulthood. Yet despite these hardships, one occasionally encounters the success of those who have made it out like Daniel Escalante Vargas, co-founder of the Luz de Esperanza homeless shelter in El Alto, and a former street kid himself.

Following the death of two of his friends, Escalante Vargas established a shelter with the help of Sister Doris Huertas where children could live free of alcohol and drugs. Huertas bought the land on which the centre now stands with help from her church and picked up its first residents by trawling the city cemetery, an area frequented by the homeless. She enlisted Escalante, who helped make it the success it is today by involving the shelter’s beneficiaries in the running of the organisation.

Eloquent and polite, Escalante challenges many preconceptions of someone brought up homeless in the streets of the city. Though a childhood on the streets does not necessarily breed contempt, one might at least expect a certain degree of gruffness or unease. Rather, he speaks lucidly about the difficulties and typicality of his formative years. Born in La Paz to a working mother and a largely absent father, he first took to the streets to join his friends after school. At the age of eight, seeking a small income, he began to work aboard the city’s micros. As the middle child of seven brothers, it was his responsibility to look after his three younger siblings, but the longer his hours became on the buses, the more he neglected his family duties.

Craving more autonomy, he became a shoe-shiner and joined a group of boys with whom he would sleep rough. While the job afforded him the opportunity to buy more than just the food that his mother was capable of providing, the luxuries he so craved remained beyond him.

He began to drink strong-proof alcohol at age thirteen (diluting it only with water) and later moved to inhaling clefa.

Night-time in La Paz allowed him to consume such substances away from prying eyes, and morning presented him the opportunity to earn some money. He drank before and after school, and during the evenings busied himself with finding an alleyway to sleep in. Every so often, him and his friends would escape to an abandoned house that his uncle owned outside the city. It was there that Escalante would first seek to change his situation. As a first step, he moved to Santa Cruz for two years, where he found work as an assistant mechanic. Upon returning to La Paz, two of his friends died in quick succession, events which marked him profoundly and gave him the mission to change the situation of the homeless.

When I ask Escalante about the causes of child homelessness, he argues that the lack of parental investment -often worsened by long working hours- forces children outside in search of independence. He tells me that while education is important, ‘the lack of affection from their parents is what forces the kids onto the street’. Escalante believes that the city’s state schools should build ties with the families of those at risk of pursuing a life on the streets

Tribalism abounds in the calles, and factions coalesce to claim and defend their localities, often by violent means. Among the homeless, this sense of community is both a defense mechanism from other such threats, and a safety net for financial hardship. Typically, a shoe-shiner needs ten clients every day in order to make enough money to eat. Should a member of the group fail to meet this threshold, the others will contribute to make up the shortfall. Similarly, shoes and other such luxuries are frequently bought with money that has been jointly saved.

Familiarity and friendship is often a conduit for many of the vices that typify life on the streets of La Paz. As such, alcohol and drug dependencies are carved into many of the expressions that during the working day are so frequently masked by balaclavas. Unsurprisingly, such addictions usually start off as a way to combat the cold, as sleep comes more readily to those who are under the influence.

A ten-year-old housed at the shelter (name undisclosed) gives a telling example of the circumstances which lead to a child becoming homeless. His parents used to travel frequently for work, leaving him with his uncle. Apparently oblivious to the child’s vulnerability, the uncle kicked him out, abandoning him to his fate on La Paz’s most dangerous streets, where he lived for two months. Now, although his parents have returned to the city, he remains in the shelter, as they are incapable of - or uninterested in - taking care of him.

The stories I bear witness to unfold along poignantly similar trajectories. Early familiarity with the streets combined with a craving for an income and independence often lead to jobs in shoe-shining. Eventually, so much time is spent away from home that living on the streets becomes a natural next step. Here, the ubiquity of strong proof alcohol and solvents all but ensures a period of addiction. Another resident of the shelter, 32 year-old David Mamani, suggests that this existence is a symptom of the manner in which the homeless are perceived in the city. Abandoned by the state and ignored by the rest of society, he suggests that every street-dweller creates a reality of their own; a world in which they alone exist and strive to survive. David identified himself as neither a paceño nor a boliviano, words enjoyed by those with a place and a status in society. David confesses that before the shelter’s intervention, he was ready to die.

The shelter steers those it houses away from addictive substances and keeps them occupied with carpentry, pottery and the maintenance of an onsite farm. It is easy to see the value of such vocational training, and its tangible results (such as hand-crafted bunk beds) are visible everywhere. The Luz de Esperanza project can only accommodate so many of those in danger; eradicating the problem of homelessness must start with government initiatives to restructure the sagging bonds of families in poverty.