The Growing Pains of a Modernising City 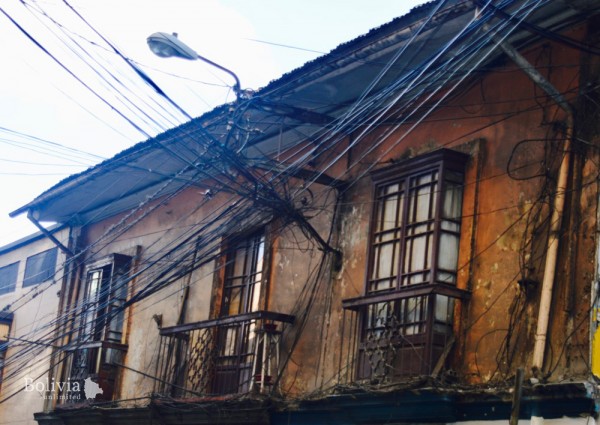 Preserving the Buildings of an Aging La Paz

Tucked away around the corner of Plaza Murillo, a mere stone’s throw away from the Legislative Assembly, a structure that bears familiar marks of colonial inspiration lays in decay. Decrepit and facing the prospect of lying in ruins, it is still recognised for its intricate design. Its origins are unknown, but it can be seen in photos dating to the 1870s. Its age shows. One portion of the building’s corrugated iron roof collapsed in January of this year due to heavy rain. An elderly couple walks by, gazes fixed, perhaps dreaming of what the structure once was, but shaking their heads for what it now is. In a plaza that draws in visitors from the farthest reaches of the world, it is a wonder how this could simply be allowed to happen.

According to Gastón Gallardo Dávila, dean of the department of architecture at the Universidad Mayor de San Andrés, it is also a wonder that most of us label these buildings as ‘colonial’. Apparently there are only a few buildings in La Paz that are actually from the colonial era. ‘There are some churches,’ Gallardo explains, ‘maybe two or three houses left, but nothing more. Nothing else is colonial architecture, it’s Arquitectura Republicana.’ In contrast to the cities of Potosí and Sucre, which are brimming with colonial edifices from the 16th and 17th centuries, La Paz is instead filled with intricate and charming buildings that pry inspiration from Architectural Rationalism and the Art Deco movements of the 20th century, both of which traceable to the Classical and Neoclassical schools so easily mistaken for colonial architecture. Regardless of their mistaken roots, these buildings are historic. They are pieces of history listed and protected by the government, and yet some of them stand neglected.

Gabor Prudencio, a demolition engineer who works in the city, hints at La Paz’s reluctance to look after these buildings saying, ‘It’s too late to become Cusco.’ Prudencio has worked in La Paz over the past year in a business that is growing due to Bolivia’s burgeoning economy and the constant demand to rip down town houses to replace them with larger, more practical and profitable office blocks. Prudencio says that cases similar to that of the house in Plaza Murillo are quite common. ‘Unfortunately,’ he adds, ‘it’s just left like that until more sections of the house start coming off. The authorities only do something if it’s an emergency.’

Marcelo Arroyo, La Paz’s municipal secretary of planning and development, says that there is a system in place. ‘We have a project for a law regarding heritage buildings, and we are working with the Ministry of Culture,’ he says. ‘In the law there are different categories for buildings that define the type of interventions one can do on each of them.’ Despite a system being in place, a lot more can be done to ensure the preservation of these structures. Intervention from the authorities is often in question.

‘According to the law,’ Gallardo says, ‘landowners are responsible for the maintenance of their house. But often, when they have old properties, they justify the neglect by saying it’s too expensive to maintain them. If the state wanted to, it could take care of it, but often it just lets buildings fall down and sees what it can do with the ruins. Then it invests money to build something new and washes its hands, justifying the process.’

In this Bolivian rendition of the classic debate between aesthetics and utility, Gallardo takes a side, favouring aesthetics. He questions the idea of replacing old buildings with new ones. ‘The Hospital de Clínicas in La Paz was built in 1914 by Emilio Villanueva, a prominent and visionary Bolivian architect,’ Gallardo explains. ‘The plan is to destroy it and build a new one. People who defend the city’s heritage ask why they need to build on top of the old one. Why can’t they preserve the old structure and pick a new site for the future building?’ Pointing to another case study, he mentions the old football stadium in Miraflores that was knocked down in 1975, its Tiwanaku influences destroyed with it. Although the stadium couldn’t accommodate the desired amount of people, what Gallardo questions is the act of demolishing architectural heritage. He sustains that, after all, these features could have been preserved in the remodelling.

Built in the 1950s and inspired by colonial architecture, this building is stubbornly fighting decay and age.

Despite these trends that favor demolition, there is a structure behind Plaza San Francisco, on Calle Murillo, that could guide others by setting an example. Built in the 1950s and inspired by colonial architecture, this building is stubbornly fighting decay and age. Its inner courtyard and beautified patio, encompassed in old brick and wooden railed verandas, draw on the colonial or Republican style that once dominated the city. Owner Daisy Vega de Arce refuses to let her property decay. With the help of her head administrator, Oscar Espejo, she has been busy developing the building. ‘Our project is to turn the house into a hostel, respecting all the architectural details that define its style,’ Espejo says. The patio is already playing host to restaurants, cafés and a distillery, whilst preserving the original structure.

Espejo shows what once was a chapel and is now being converted into a restaurant and points out the rotten wooden railings he has been meaning to replace. What I’m seeing isn’t a destruction of heritage but a renewal: archaic surroundings renovated and reinforced, decaying interiors infused with new life and purpose. Overall, this is deeply compliant with the drive to modernise La Paz and the need to make use of the structures. The house on Calle Murillo provides a middle ground. It seeks rejuvenation, not abolition – relevancy instead of disuse.

Gallardo believes that paceños don’t value preservation. ‘There is the orgullo paceño,’ he concedes. ‘The paceño is proud to have a city that is 450 years old. However, in daily life, it seems better to destroy something old. Only when it’s lost do people realise it’s too late.’ This is clearly the case with Mercado Lanza. It was once a traditional market and is now a white concrete structure next to the San Francisco Church, its potential only realised too late. But Gallardo understands that ‘each historic period wants to have its own expression and style. With La Paz reaching modernity, it is no surprise that this is the case,’ he says. It is practical, inevitable and logical that the old makes way for the new.

Espejo shows sentiment towards these crumbling structures that he thinks people of La Paz generally undervalue. ‘It seems that architectural heritage has been left behind,’ he says. ‘If we are not going to value our history, I do not know what we are going to value.’