THE GREEN GHOST OF LA PAZ 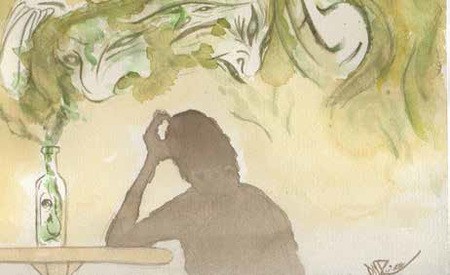 As you walk into Café Etno on Calle Jaen you might be forgiven for thinking that you were no longer in La Paz, but had been transported to a bar in a trendy district of a European city. The cavernous ceilings and dim candle-light are only some of the things that make this a unique spot in Bolivia. The other —its call to fame— is that Café Etno has apparently become the only place in La Paz that serves Ajenjo: a Bolivian variety of absinthe.

Usually made from wormwood and served alight on a sugar cube, European absinthe is largely associated with artists and intellectuals such as Vincent Van Gogh and Charles Baudelaire. Ajenjo is different. It is served straight with a side-glass of drinking water and it is distilled from an eponymous plant, which can take up to 25 years to flower on the banks of Bolivian rivers.

'First, inhale. Then drink. Then exhale', instructs the waiter, as he places a tiny shot of luminescent green liquid down in front of me.

'After that take tiny sips of the water… Don’t take large gulps of the water. Otherwise, you might feel the urge to vomit', he warns.

I fear the quantity of water drunk won’t make a difference, as I summon the courage to ingest the synthetic-looking liquid. Minutes later, the back of my throat is still smarting from the Ajenjo as it blazes a trail towards my stomach.

vThe overpowering taste of aniseed which I distinctly associate with European absinthe is not present. Instead, what I can just about discern is a faint grassy flavour, which intensifies as an after-taste once the burning begins to subside.

According to the bar staff, the mythic reputation of absinthe acting as a hallucinogen is maintained by Ajenjo. Apparently the liquid has caused previous drinkers to see spirits and ghosts lurking around on the streets. This is hardly surprising when one considers that the street it’s on is reportedly haunted by the ghost of Pedro Domingo Murillo: a notorious figure in the struggle for Bolivia’s independence, whose house remains on the street to this day.

Although General Murillo does not make an appearance that evening as I leave the bar, I am struck by the incredible feat that I have accomplished. In two drinks, I managed to consume 50 years worth of Ajenjo. In Europe, absinthe is known as la fée verte, the green fairy. But here, as I stare at the spectral green liquid inside my shot glass, it seems to me Ajenjo would be better named the green ghost, if only to reaffirm a curious local legend.