The Golden Grain of the Andes 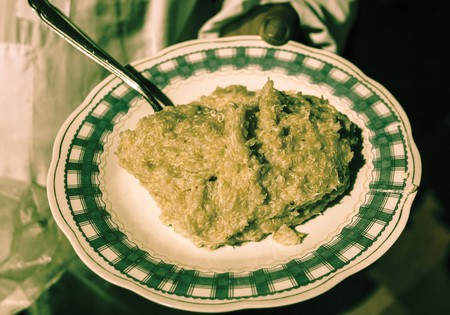 Quinoa Under The Microscope

Quinoa, the grain-like 'pseudocereal' and sacred grain of the Incas has been a key food in Andean diet since 3000 BC. Its status as the mother of all grains was suppressed during the early Spanish colonial rule; relegated to being a food product only fit for native ‘lower’ classes. Today, however, it has been heralded as the latest superfood and is being celebrated with international recognition. In 2013 we are living in the ‘International Year of Quinoa’. Even astronauts are thinking of taking it to space. Francesa, a Bolivian company, are exporting quinoa biscuits to the US, and it’s not just humans who will benefit from this, but also dogs. In the world’s largest quinoa producing nation, the latest nutritional secrets of quinoa, along with its evolving economic and cultural significance, leave much to be explored.

Quinoa grows in the most adverse of conditions. It endures 4 months of hostile temperature changes, ranging from -10 to 30 degrees Centigrade, as well surviving a scarce and irregular water supply. It grows in a highly saline soil at an altitude of over 3600m, with the corresponding low oxygen levels.

The southern altiplano, from Salar de Uyuni to Oruro, has a meandering route of parcelas de quinua , that have been feeding the growers and their families for centuries: but the trend is quickly changing. In recent years, the demand for the crop has soared, and with it its price. ‘Quinoa used to be the food of the people. Now it’s a luxury, even for rich people’, Virginia, the housekeeper at the BX house laments. Whilst the price of quinoa has more than tripled over the past three years, from Bs.4 to Bs.14 per pound, local consumption has drastically diminished by an astonishing 34% - according to the Agricultural Ministry.

I sit amongst a dozen families at the Feria 16 de Julio in El Alto eating pesq’e con leche and ahogado , the 35 year old dish pioneered by the partners Josefa Mamani and Javier Quella. They strive to keep the dish affordable to locals, producing it for Bs. 5, despite it costing Bs.1.20 when they started out.

Since becoming a ‘superfood’, quinoa is now sold in packets of pre-washed grain, replacing the freedom of buying it ‘a granel’, whereby buyers were free to have a bag stuffed with quinoa and pay for it by the gram. This Western-style packaging has elevated the status of the quinoa, isolating it from other staple grains such as rice and wheat.
Yet the way in which the grain is now sold has some troubling effects on the local market. A 500g packet of Quinoa Real costs Bs.15 in Bolivia, which is expensive enough for the local market, but can be exported for up to $10 (over 4 times the price) to the US. It is clear that there is a growing worldwide demand for the Andean grain. But why?

As bizarre as it may seem, the answer may well be found in outer space. For decades, NASA has provided quinoa to astronauts as a life-sustaining food. Quinoa has a complete and extensive nutritional content, high in an endless list of nutrients including the cardiovascular strengthener magnesium. In fact, it drove researcher Phillip White to state that, ‘quinoa comes as close to any other food to supplying all the essential life sustaining nutrients in the plant or animal kingdom’.

The list of proven health benefits appears varied and endless, even extending to protection against gallstones and cataracts. Dr. Absalon Pacheco, my local family physician, states that quinoa can even combat adverse menopausal symptoms: ‘Bolivian women rarely suffer from the menopause’.

Intrigued by quinoa’s bountiful list of health properties, I was fascinated to hear of current research in Bolivia into some of quinoa’s lesser known salutary effects. Paola Chavez, an ecophysiologist who’s carried out research on the grain introduced me to saponins. These infamous sugar and fat based chemicals aid plants like quinoa by deterring fungi, bacteria and animals, as well as protecting them from the harsh sun of the Altiplano (think of them as sunblock for plants). Saponins are found on the outer shell of the quinoa grain, but never listed on the back of commercial food packages. Their toxicity in terms of hemolysis (splitting of red blood cells), and bitter taste, make it customary to remove saponins by a strict 4-cycle washing procedure during the industrialisation process. But Dr. Pacheco mentions over and over ‘el poder de la saponina’, and believes it the key to preventing menopausal disorders.

Late one evening, in the centre of La Paz, I meet with research scientist, food engineer and dietician Guillermo Tapia. He introduces himself as an Orureño who grew up eating saponins every day, praising these compounds and their high levels (of up to 8%) in quinoa. He claims the antibacterial properties of saponins protected him and his friends from stomach infections during childhood, and cites his own vitality as an example of their incorrect labeling as toxic. He backs this up with the 2007 EPA conclusion that saponins are only toxic if injected directly into blood stream. Within minutes his energy and excitement for saponins has intoxicated him, and the secrets of saponins start pouring out.

‘El secreto de la juventud’, ‘the secret of youth’, can be traced to the high antioxidative properties of saponins. He talks of the therapeutic, rather than nutritional, properties of this compound, listing four major diseases for which saponins can be beneficial: diabetes, cardiovascular disease, cancer and arthritis. His research also sheds light on its antiviral properties. Saponins have the capacity to stimulate a response of the immune system and in this way they make strong formulations for HIV and therapeutic cancer vaccines.

Why, when there is such a diversity of therapeutic benefits, do major quinoa producers like ANAPQUI (The National Association of Quinoa Producers) continue to remove 80% of the them? The bitter taste? ‘This can be eliminated through cooking skill’, jokes Guillermo.
The problem comes back to a lack of understanding about the salutary properties of saponins. A market seller proudly promotes the superiority of her black quinoa over white, brown and red varieties, by boasting its higher vitamin content, though she wasn’t able to give further details. Guillermo aims to start a campaign informing the quinoa producers to change the industrialisation process of quinoa to cease the elimination of these wonder chemicals. ANAPQUI continue to receive pressure from its importers to remove saponins due to the scaremongering and desire for neutral taste. Guillermo is hopeful that within two to four years enough faith in saponins will have developed to change this.

Regardless of this, the quinoa industry is booming in Bolivia. Wandering through the streets of La Paz, numerous products stand out; from quinoa biscuits to chocolates, yoghurt, juice and even pizza. The government is introducing schemes to increase local consumption, and a law to ensure all schoolchildren eat quinoa as part of their breakfast diet is soon to be passed.

It will be interesting to see how quinoa production in Bolivia will change. Will saponins become another major selling point of the golden grain? Will the process of industrialisation adapt to incorporate saponins? Will the public grow used to the ensuing increase in bitterness? It is hard to predict. One certainty however is that the optimum climate of the Southern Altiplano of Bolivia, along with the experience of its quinoa growers, places Bolivia at the forefront of whatever changes are to come.

Vitamin E
An antioxidant, which protects cells against free radicals that are known to contribute to ageing and cancer development

Iron
Mineral needed to make haemoglobin, the major oxygen carrying component of red blood cells and key to our energy release, hindering the development of anaemia