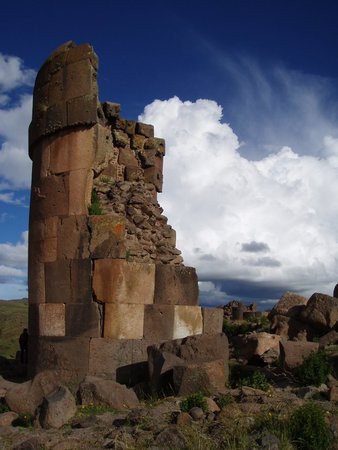 The man presents me with a theory - a theory supported by many historians - that the intriguing funerary towers along which we are standing in an open ravine are, in fact, much more than mere tombs for the dead. The sun is setting on the vast plains of Bolivia’s Cordillera Occidental and his theory sounds convincing. So I listen.

I had spoken to several people about the Chullpa, yet Eduardo was the first to talk passionately about these pre-Columbian towers. This unlikely tour guide told me that the Chullpas first appeared in the Peruvian-Bolivian altiplano after the demise of the Imperio Tiahuanaco in the 10th Century, and survived Inca supremacy but not colonial invasion. He believes they would have strengthened family and societal ties and served as a reminder to everyone in the community of the power once held by the Aymara aristocracy during their reign; a power some believe they would continue to have even in death.

Long hours at La Paz’s National Ethnographic Museum of Folklore had provided me with a wealth of resources and my interest in the above-ground tombs was ignited. Still, I couldn’t help but feel that the information I was getting was all too academic; that although I could recite some charming facts, I didn’t really understand them. I had to see the Chullpas for myself.

Having ventured five hours south of La Paz, I arrived at Sajama’s ambitiously named Plaza Mayor (there is nothing ‘Mayor’ about it). Eduardo, just the second person I met, showed a surprisingly keen interest in my quest to visit the nearby Chullpas. Having encountered several blank expressions upon my previous requests for information in La Paz, Eduardo was the first person not only to hold valuable knowledge of the Chullpa, but also to show a desire to share it. 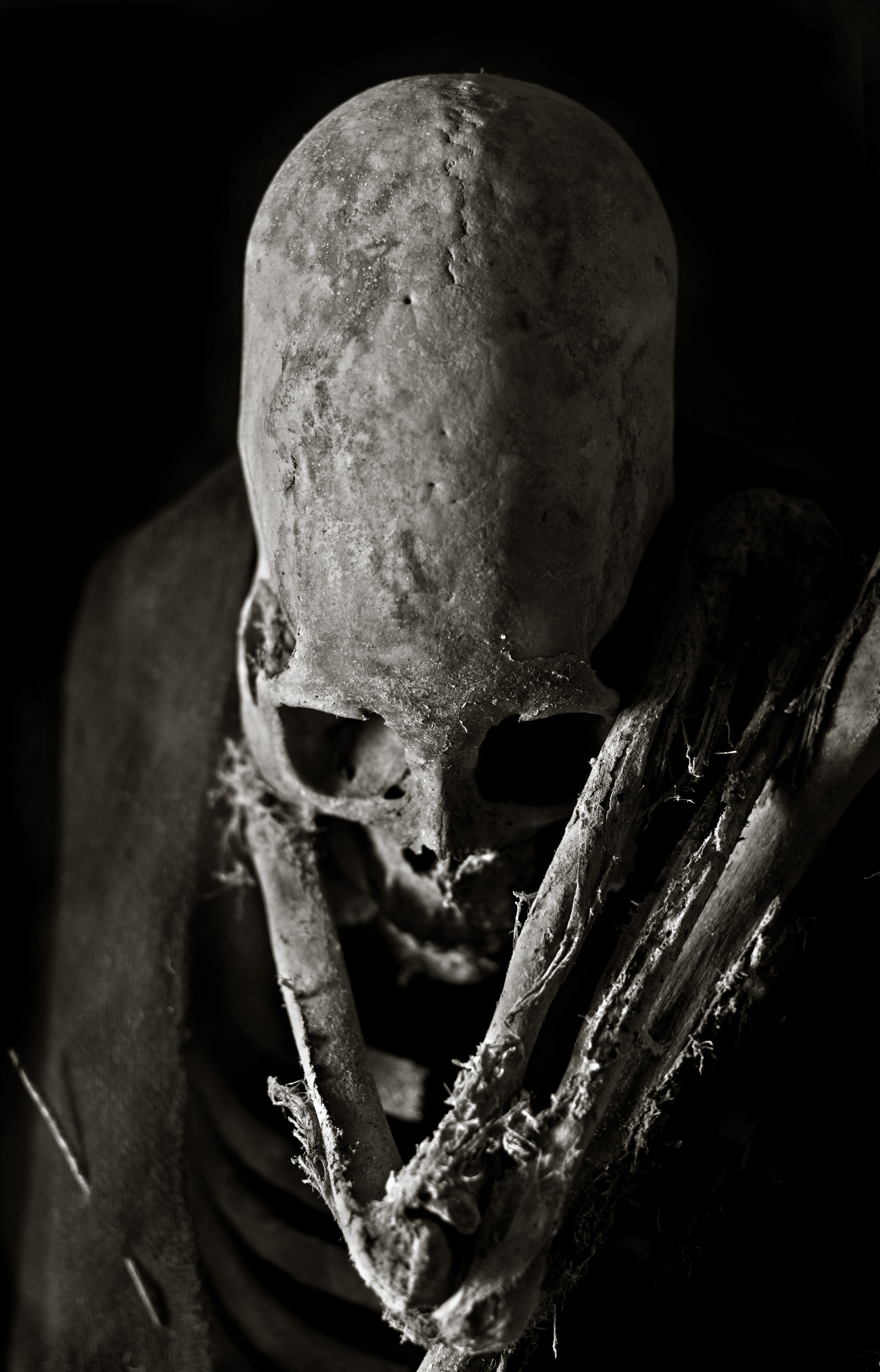 Once the basis of important community post-death rituals, the Chullpas sporadically dot the landscape around many towns and villages, testament to an ancient indigenous mortuary practice. Sadly, they have been left untouched for centuries and although many can still be found intact and make for a fascinating archaeological visit, they now stand crumbling and forgotten, representing little more than a long lost burial tradition.

The sun is setting and the temperature drops below zero. Having plummeted through the valley along a winding, sandy road in Eduardo’s 4X4, flanked by the impressive peaks of Pomerape and Parinacota, we arrived at the Huayllilla cluster of Chullpas. The towers in front of me stand 12 feet tall, each one built for a different mallku or jilakata, along with their close family. They are grouped, with a degree of order, tens of metres apart. Totally secluded, their locations are by no means accidental, but strategically positioned - they once formed boundaries between different ayllus. At Huayllilla, of the Carangas province, their location had further meaning. Fighting amongst different Aymara groups, in this case the Carangas and the Pacajes, resulted in them being constructed away from settlements for protection.

I decide not to enter the Chullpa out of respect, but after a peek inside the small, ground-level entrance, I can see the compacted bones of past Aymara aristocracy, recognisable their artificially distorted crania. Decomposing, they lie feeble and disregarded; considerably different from half a millennium earlier, when the mummified body was preserved and actively worshipped. The entrance, always orientated towards the east, holds clues to the ancient Aymara conception of the natural world. They believed that the sunrise’s provision of light, heat and fertility was key to maintaining life, and that orientation towards the sun setting in the west would result in burning of the soul.

‘In the not too distant past,’ Eduardo said, breaking our contemplative silence, ‘people knew to respect the Chullpa. Grand-parents, the last of which are still alive today, would teach their children to be considerate of their historical value. Nowadays, however, few people pay them any attention and while some are aware of their existence, the towers remain abandoned. They are simply no longer relevant’.

Although the national park status of Sajama prevents human destruction at Huayllilla, I stood, silent and despondent, as the sun ducked behind the towering volcanoes, disheartened at the thought that 500 years have passed since the Chullpa alongside me last served its purpose.

The lack of explicit government protection of the Chullpa is distressing. In the La Paz department, the Chullpas at Chicani were damaged when local residents decided to build houses on a nearby site, collapsing the foundations and bringing the ancient tombs to shatter and fragment. These curious structures, once the keystone of family and community, are now left decaying; falling apart and no-one seems to bat an eyelid.

Back in La Paz, I met archaeological expert Jédu Sagárnaga, who has studied the Chullpas for 15 years. I learned that the Aymara señoríos, which formed following the collapse of Tiahuanaco, and from where the Chullpa tradition arose, each had their own individual diocese and therefore various religious differences existed between different ethnic groups. Despite this, two religious pillars were common in every community: the importance of the natural world and the adoration of dead ancestors. Sagárnaga made it quite clear that these two pillars of society were central to the ideology of the Chullpa. ‘The importance of veneration is represented by the construction of such elaborate tombs to show the respect and personal prestige that the mallkus invoked’.

Similarly, the strong influence of the natural world within Aymara religious conception was key to the ideological construction and burial. The Chullpa was built as a tomb representative of a woman’s uterus in which the soul is re-born. The mummified corpse would be placed in the foetal position, due to the pre-Hispanic belief in re-birth and death as a process of life; not the end of it. Leather or llama skin enveloped the body as a form of further preservation; such was the importance of the supposed relationship between the body and soul.

Yet there are still several unsolved mysteries surrounding the Chullpa.
‘The cult rituals involved the sacrifice of the jilakata’s servant, at times involuntarily’, Eduardo recounted, ‘but anthropologists are still investigating the ceremony that took place at the towers and there are many unknowns’. Pointing to six square holes above the entrance he explained, ‘archaeologists are still baffled as to the relevance of certain features at the Chullpa, but it is most likely that they too, relate to age-old Aymara religious beliefs’.

Mysteries aside, the physical preservation of the body, veneration and maintaining social interaction with the dead remain essential features of life in the Bolivian altiplano to this day. The tradition of sharing with the deceased is still practiced in a syncretic fashion between the Catholic faith and the Andean cosmovisión. Yet the Chullpa and its significance has been all but totally removed by Catholicism and its influence on pre-hispanic traditions; the wider population of the region remains largely oblivious to the ancestral significance of these towers once central to Aymara society. If they are known at all, it is as archaeological curios.

Whilst Andean mummification and subsequent sacrifices may not be relevant in the modern day treatment of the dead, it is saddening that the Chullpas are neither admired nor acknowledged by their rightful inheritors.

In the isolated ravine at Huayllilla, the scattered Chullpas are the only indication of civilization for miles. They continue to peer over distant communities; towns and villages that were once home to Aymara lords and are now home to Eduardo, one of remaining few who still care for the towers. Listening to this man, looking out on these towers peppered across the horizon with Volcán Sajama dominating the austere backdrop, it still remains possible to find comfort in his pride and passion.