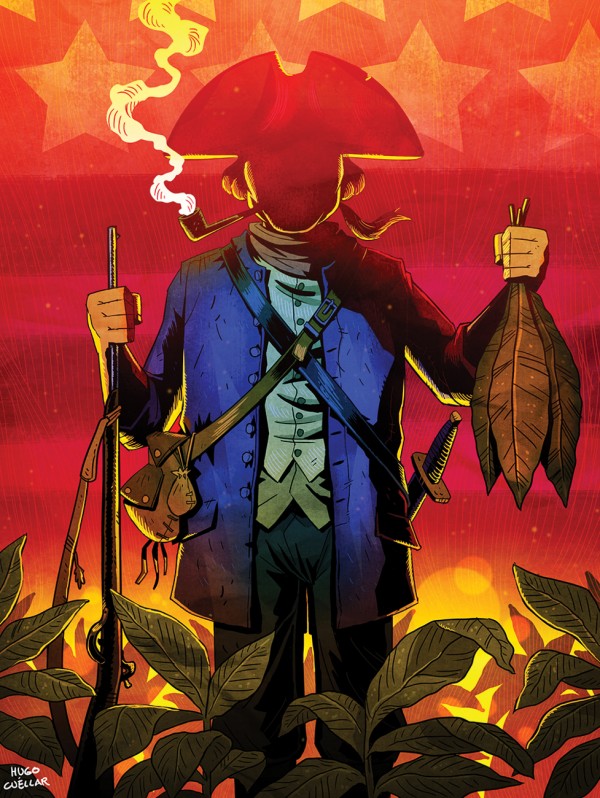 History is a series of ambiguities. Oftentimes, political and economic power determines what we see as truth. One example of how power blurs the line of truth is by determining which businesses and enterprises are legitimate and which are illegal.

The United States frequently criticises Bolivia over the problem of drugs. In 2013, President Obama identified Bolivia, Burma, and Venezuela as the three countries that have consistently failed to meet the objectives of the US War on Drugs. Yet it could be argued that the United States, in fact, was history’s first ‘narco nation’. Today, few people realise that the wealth of the United States was, in part, originally based on the sale of drugs. In the 18th century, before the advent of heroin and cocaine, the United States was the world’s largest producer of tobacco and the drug nicotine.

For many centuries, prior to the arrival of Europeans in North America, indigenous people used tobacco for medicinal and cultural purposes. Tobacco had a place in these indigenous cultures much like coca still has in Bolivia. Indigenous people did not use tobacco or coca for recreation or commercial purposes.

The English colonists in North America recognised the potential profit from tobacco and created a market for it. Meanwhile, governments around the world had outlawed this dangerous, addictive drug. The Ottoman Empire banned tobacco in 1633, China in 1612, and Russia in 1613, and in 1617 even Mongolia made smoking a crime. Using the still relatively new technology of the printing press, American tobacco producers and their English marketing partners launched a massive propaganda campaign of books, pamphlets, and illustrations to promote tobacco as healthful and to portray it as fashionable in European cafés and royal courts.

In a world not yet accustomed to advertising and propaganda, these false claims about tobacco succeeded. Tobacco became so wildly popular in the royal courts of Europe that the American colonists quickly became wealthy. In the middle of the 18th century, the colonies in North America produced an average of 18,000 kilogrammes of tobacco each year. The trade became so lucrative that every colony produced a crop, but production was centred around the Chesapeake Bay and in the area of the present-day Southern states.

American colonial growers sought to control not only the cultivation of tobacco, but also its sale, which required the wresting of the market away from the English and the cessation of the heavy taxes paid to the Crown. And so they revolted against British rule.

This new tobacco market financed the American Revolution, as the colonists’ burgeoning army was supported with taxes on tobacco and loans from the French using tobacco as collateral. Unlike Bolivia and Mexico, which each had vast silver deposits from which to mint coins, the North American revolutionaries did not initially have their own currency and instead used tobacco as money. So important was tobacco to the revolutionary cause that the British military targeted tobacco crops and warehouses for destruction as the key to defeating the rebels. The British Navy blockaded the ports of the incipient nation and managed to confiscate 15,500 kilogrammes of tobacco bound for sale in Europe. Because of the importance of this one commodity, the war between the new American nation and Great Britain became known as the ‘Tobacco War’ in the area around the state of Maryland and the modern-day capital of Washington, DC. Today, the war has the more politically powerful name of the ‘American Revolution’, which ended with the Treaty of Paris in 1783.

Tobacco enabled the creation of a new narco nation, the United States of America. In 1787, delegates from the 13 former colonies met in Philadelphia to write a new Constitution for the emerging country. The most powerful delegates to the Constitutional Convention represented the tobacco growers in the South, and they fought to protect their tobacco interests, in particular the importation of slaves from Africa and the expansion of lands to the west for more tobacco plantations. Of the first five American presidents, four were tobacco growers: George Washington, Thomas Jefferson, James Madison, and James Monroe. To solidify their hold on the new American government, the Southerners moved the capital from Philadelphia to tobacco country along the Potomac River, where Washington, DC, sits today. To illustrate the importance of tobacco to the American economy, the new congressional building was decorated with tobacco plants and its columns were crowned with tobacco leaves.

In hope of finding new areas for tobacco cultivation, President Thomas Jefferson purchased the French lands along the Mississippi River in 1803, doubling the size of the United States by adding over 2 million square kilometers, an area almost twice the size of modern Bolivia. New Orleans, at the mouth of the Mississippi River, became the drug supplier to the world. As the United States grew and pushed westward, the new land was less suitable for tobacco cultivation, and slowly the country found new crops, such as cotton and maize (which was easily transformed into another intoxicant, corn whiskey).

Tobacco grower James Monroe, who negotiated the Louisiana Purchase for Thomas Jefferson and eventually succeeded him as president, extended US influence into Latin American markets by creating the Monroe Doctrine, which limited the activity and influence of Europe in the Western Hemisphere. This project established the precedent for perpetual US interference in the commerce and politics of Latin America.

These North Americans of European ancestry created the first global drug trade with tobacco, and soon capitalists around the world followed their example by expanding into the production of other drugs, such as opium. Scientists helped to create even stronger substances, such as heroin (from opium) and cocaine (from coca). But just as US citizens became some of the heaviest users of tobacco, they also became addicted to other drugs. Ironically, the United States now has a massive substance-abuse problem, and, unable to control its drug problem at home, US officials constantly divert attention by accusing Bolivia and other developing countries of being the source of the problem.

Today the United States is the centre of the international drug trade. It is the world’s largest drug market, and it supplies the bulk of the funds in the international narcotics trade. For nearly 400 years, the United States has been a leading producer and consumer of licit and illicit narcotics, pointing the finger of guilt at Bolivia and obscuring the fact that it is still history’s leading narco nation. If only the people and the government of the United States would look at their own history, they would understand their country’s central role in the creation and maintenance of the global drug trade.

Anthropologist Jack Weatherford was born on a tobacco farm in South Carolina. He is the author of El Legado Indígena, which examines the contributions of indigenous Americans to world history.