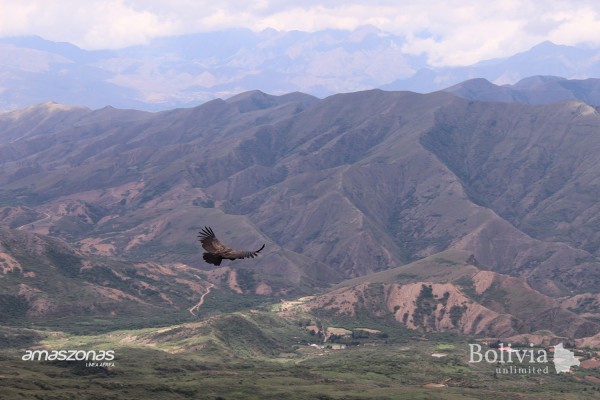 A female Andean Condor sweeps over herterritory in search of food, using warm aircurrents to save energy.

This big bird is threatened by habitat loss and human aggression

The Andean Condor, one of the world’s largest birds that are able to fly, weighs up to 33 kilogrammes and has a wingspan that can exceed three metres. The Andes mountain range of South America is the condor’s exclusive habitat. The bird not only wows people with its grace and size, but also with its historical significance. All of this has contributed to the Andean condor’s status as a national symbol of Bolivia, and thus its appearance on the country’s tricolor flag.

In Incan mythology, the condor signified the upper world, or the sky; furthermore, it also signified power and health. Julia Peña, a co-founder of the Valle de los Condores tour company and conservation project near Tarija, says that many Andean indigenous groups believed that the Andean Condor cleaned the air and the human soul. This mythological task makes sense, as the condor is a scavenging vulture that feeds on dead animals, cleaning its territory of carcasses that otherwise would rot and pollute the surroundings.

The Andean Condor soars up to altitudes of 5,000 metres to scout for food, relying on thermal air currents that it uses to propel itself with its fully expanded wings. Considering its weight, this is vital for the Andean condor’s survival, as the warm air enables it to ascend without wasting much energy. However, this reliance on hot air currents within the mountain ranges can also inhibit the condor’s flight during the rainy season from November through March. Once its feathers are wet, it is considerably weighed down, which can interfere with the bird’s stamina, directional skills and flight control, leaving it unable to navigate the skies in search of food. Many condors do not survive the rainy season.

Steep cliff and rock faces make the perfect placefor a Condor to build its nest, using rocks toprotect themselves from the elements, the sheerdrops and high altitude ensures that predatorscannot get near.

Condors are also threatened by rural farmers. Although the condor will prey on any deceased cattle or sheep, it will never attack a live animal. But some farmers still consider the bird to be a threat to their livestock, and they will use poison to kill the condors – not realising that the iconic birds are no threat to their farm animals at all. Peña says that due to this and other factors, such as loss of habitat, the breathtaking species is under threat of extinction.

Because the condor was a relatively hardy species in the past, before widespread human encroachment and persecution against it, it had a low mortality rate and a concomitant low reproductive rate. It is more difficult than ever for condor mates to find each other, and because the female condor lays only one egg every two years, the species cannot replace its depleted population. During infancy, both the mother and the father condor mind their young, feeding it by regurgitating food that they have consumed in a liquid form so that the chick can consume it. The young bird stays in a nest that its parents have made out of rocks, which provides protection against the elements. These rock nests are located at extremely high altitudes, sometimes on cliff edges.

According to Peña, although there are very effective conservation and reproduction projects for the Andean Condor in Colombia and Argentina, Bolivia lacks such efforts. There is a condor conservation site in Andean foothills of the western region of the Santa Cruz department, but it is not aimed towards increasing numbers in the wild. Its staff rescues condors that have been poisoned by farmers, but the birds are kept in captivity after their treatment. Though this conservation has the condors’ welfare in mind, any chicks born here do not have the chance to fly as they should, and the birds are susceptible to many diseases that are carried by humans. It is for this reason that Peña expresses the need for more educational projects about the species so that people can learn about its habits and especially about its harmlessness to livestock in the area.