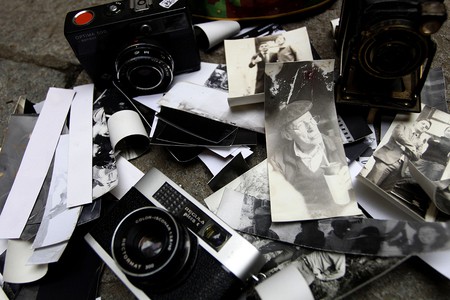 The dark room where Juan Gabriel Estellano manually develops some of his photos is much more than a humid and stagnant place where someone could turn out the lights at any given moment. It’s a room - in the courtyard of a creaking mansion - with a wardrobe covered in dust, a few straggling hangers, newspapers stacked up in a pile, a precariously-fixed water tap and other small objects that are easy to overlook or trip over as one moves around the space. It’s a five-by-three-metre hideout filled with borrowed items.

Estellano shares this space with the filing clerk and cultural director, Cristina Machicado. The room was baptised as L’obscurito and it is littered with tools, machines and utensils that are capable of transporting an idle visitor to another time period. These tools have been recycled, reworked or restored by Estellano.

‘We set up a light table on which to view negatives thanks to an ordinary table that we modified’, explains Juan Gabriel, as he shuffles boxes and folders to uncover the table’s surface. ‘We have two antique enlargers that work perfectly. One came from Cristina’s grandmother and the other from a Japanese man named Toshi Fujimoto who lets us use it. We use the enlargers with expired film and paper that Fujimoto has also given us and which we value dearly.’

Some of these rolls expired in the early 1980’s, when Juan Gabriel hadn’t even been born yet. ‘It’s really crazy because you never really know how exactly time will affect the film. Sometimes, the shots are far too overexposed and on other occasions the opposite happens’, he says. Something similar occurs with the expired paper they use to immortalise certain scenes of day-to-day family life. ‘The resulting texture, in this case, is similar to that of an old shot,’ Estellano explains. ‘It is like holding a photo from thirty years ago in your hands, something very surreal. These are photos that you’ve taken today, the day before yesterday, or two weeks ago, but they remind you of your grandparent’s house. They draw you into thinking about the subjective nature of time’.

On top of some bookshelves less than two metres away from where Juan Gabriel is standing, there is a handful of varied silhouettes on paper in black and white. ‘These are some of the test strips we have used to experiment with exposure and contrast’, he tells me as I approach the strips of paper. In the first one I see, a couple of Estellano’s friends are posing. In the second, it’s his father with a beret and a mate container that is nearly touching his mouth. ‘People move on, people change’, he philosophises later on, after he puts together a collage of them on the floor. ‘A photo is a single moment that we rescue, that stays with us, but that will never happen again.’

Sometimes, Juan Gabriel uses some of the outdated cameras that he brought from France when he worked there for a season as a volunteer: a Kodak Anastigmat from 30 years ago, an Agfa from the 1960’s, a Regula Picca from the 1970s, a transparent Vivitar from the 90’s and an analog Nikon from the same decade that looks very similar to the digital cameras of today.

All of the cameras were discarded: impeccable artifacts that didn’t draw the attention of their owners anymore. They had become wasted material, waiting to be thrown into the bin. All of them, before Estellano got his paws on them, used to be in the depths of the Rag and Bone collection of Emaús, an organisation that supports illegal immigrants, beggars and the unemployed. Emaús is a community that specialises in the use of refurbished items and whose members believe that some people substitute their furniture as often as they refashion their hairstyle. The organisation remind us that no object should be considered waste until it has been given a second chance.

Inspired by his experience with Emaús, Juan Gabriel filmed a documentary: La vie des choses (The life of objects). ‘I understood that objects often have many meanings’, he underlines. ‘I felt really curious. I wanted to listen to people speak about their objects.’ In Estellano’s short film, a guys relates his rolling tobacco to his time in the war in Afghanistan. Another guy becomes emotional seeing an old sewing machine that reminds him of the one his mother used. Many of the items featured in the film are domestic treasures: books with annotated margins, guitars that were restored and now sound the same as they did on the day they were first played. Keyboards, nuts and bolts used to pin up random pieces of junk. Surely, amongst these are some of the objects that ended up in Estellano’s workshop.

Today, while he shows me his rescued items, Juan Gabriel tells me that the dark room (in which he whiles away his free time) was a storage room he had to clean up thoroughly before it was fit to use and enjoy.
‘Some people believed that we would never be able to get it ready’, he smiles. Sometimes the blindest man is not the one who can’t see, but the one who simply doesn’t want to.

This text was originally published in the magazine ‘Escape del diario’ La Razón, in Bolivia

Juan Gabriel Estellan, photographer and director. His web page can be found at www.estejuanga.con