The culture of protest

You leave your house and home behind, taking nothing but the clothes you are wearing, your children and a bundle of possessions you hope might sustain you. Then you walk for two months. You have little idea where you might find food or shelter but you do know the road will be difficult and long. The air is humid and hot, you encounter police violence on the way and then you climb up and up and up, suffering from exhaustion, altitude sickness and hunger until you see a bustling city where you hope your prayers might be answered. Why?

The history of protest in Bolivia is an illustrious one – you could even say it is one of the many national symbols of the new Plurinacional state. The recent TIPNIS march on La Paz has gone down as one of the country's most important protests in recent history yet it is far from being an anomaly. Barely a day passes without one and everyone in Bolivia are witness to how the power of social protests can change everything from one day to the next: from overturning legislation and bringing down the Head of State. So what is this force that drives the people politics on the streets?

To understand protest as the heart of Bolivia's evolution, it is useful to refer back to two of the country's most critical historical events – the Guerra del Pacífico and La Guerra del Chaco. In the first, against Chile, Bolivia lost its Pacific coast; in the second, against Paraguay, the Bolivian army (in some cases literally) died of thirst due to the unforgiving climate of the region and their unfamiliarity with the geography, surrendering the Chaco region in the process. These two wars stand among countless other losses of territory and natural resources, ingraining a sense of loss and anguish deep within the national psyche (not to mention the Spanish conquest, in which the country lost vast mineral resources and countless lives). Bolivia has been defeated in every war it's ever fought in, and indigenous communities have traditionally been those who've incurred the greatest losses.

It was out of the ashes of the Chaco war that the Bolivian National Revolution in 1952 arose, and with it, a construction of Bolivia's nationhood that attempted to incorporate the Aymara and Quechua communities that made up over 65% of the country's population. It is at this juncture we can start to see the emergence of a form of political participation rooted in the reassertion of sovereignty and indigenous identity. 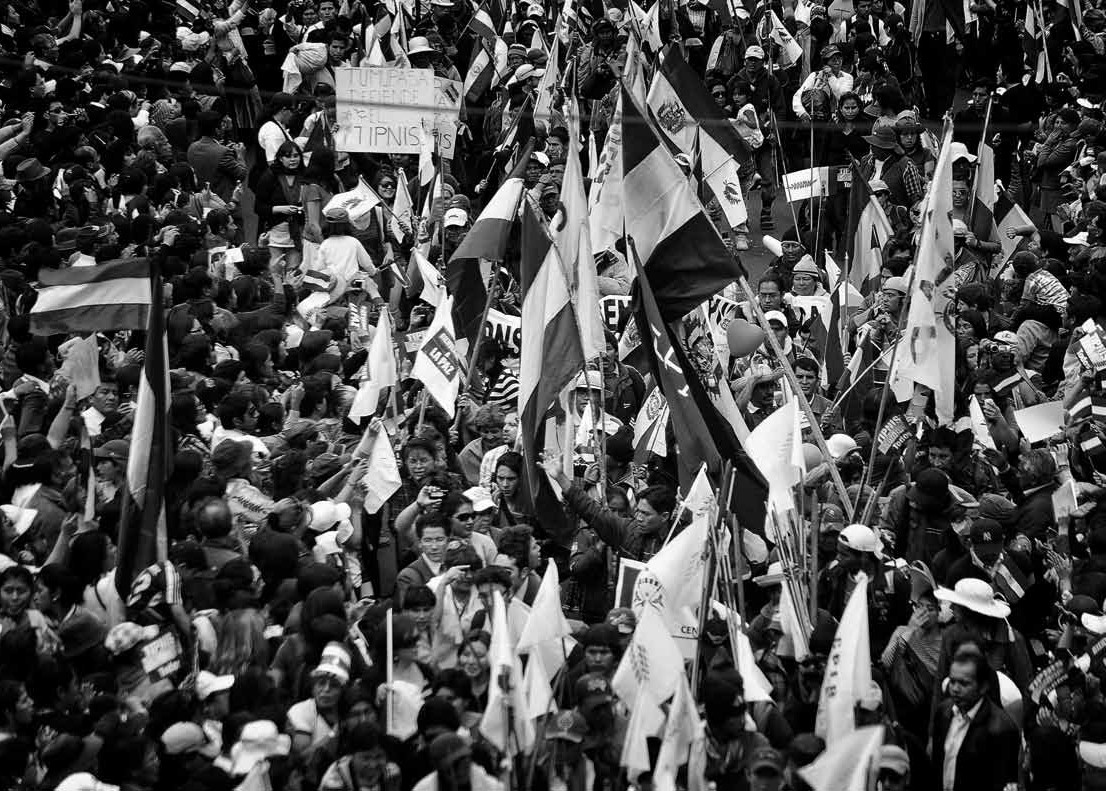 The years following the Revolution were just as turbulent, both socially and politically. Coups, countercoups and transitory rebellions marked the path to democracy in the 1980s, followed by a growing national sentiment against the privatisation policies of the 1990s. However, it was the 2000s that defined Bolivia in terms of protest – the now-infamous Guerra del Agua and Guerra del Gas are ingrained in the contemporary national consciousness; the common thread running through them based around selfdetermination and control over basic natural resources.

The UN states that access to water is a basic human right. What happens, then, when this element of survival is under threat? For the Bolivians who found water was no longer running in their taps in 2000, they took to the street, ultimately forcing the government to rescind concessions to the foreign firm Aguas de Tunari. Three years later, a government plan to export gas reserves via Chile to the US sparked the fire of protest once more, spreading through most of Bolivia's Andean cities. And this time, the result was even more drastic.

Octubre Negro, in 2003, is one of Bolivia's darkest memories in recent times. As protesters in El Alto blocked access to a petrol plant that provided for the entire area, police opened fire leaving over 60 lifeless bodies on the streets. The outcry was enough to send the then President, Gonzalo Sanchez de Lozada, fleeing to the United States. Again, the plan was reversed and on the wave of continued protests, Evo Morales, the first indigenous President, and his party, Movimiento al Socialismo (MAS) was elected in 2005.

However, it is clear that this progression of Bolivian politics is not simply a tussle over capitalist or socialist policies; it is more about survival, the right for self-determination, and control over the country's lifelines. From the defeat in the Guerra de Pacifico, loss has been a recurrent trope in Bolivia's history and protest has become a national method of protection. When it comes to lifelines, the most important road connecting the country to the ports of Peru and Chile goes through El Alto, meaning that it takes only a single road block to cut off the seat of government in La Paz from the outside world and hence from food and energy supplies.

Only last December, as the government announced petrol prices would almost double, protests escalated so intensely that the resignation of Morales was called. As no stranger to the power of the people himself, he was forced to reconsider. And of course, TIPNIS, last month, was another reminder that the spirit of protest is as alive as ever in Bolivia. In a sense, protest has come to resemble a form of popular direct democracy where the people take part in referendums by filing out onto the streets, instead of by balloting votes at polling stations.

What is striking about the historical protests such as those over water and gas (and recently the TIPNIS), is the transition from localised to national protests. They become more a symbol of the meaning of citizenship and what they want Bolivia as a nation to be – a respecter of rights, the environment, ownership, political participation and most of all, survival.