The ‘constructions’ of La Paz 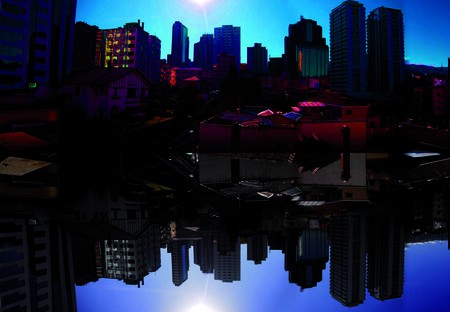 Arriving in Bolivia by plane, I was amazed by the view of the capital: a landscape of small, red, square houses slotted in together like puzzle-pieces. Their shining roofs mirrored the sun on the eastern and western Laderas of La Paz that spread up the mountainsides. As they glittered be­fore the soft backdrop of the famous Illimani mountain looming on the horizon, I felt I could not have been welcomed by a more beautiful sight.

On a Tuesday afternoon I met Leonardo Gonzales, 31, a free­lance architect who has studied and worked in Europe. He describes himself as a modern architect of a minimalist style. He arrived in his sports gear at a light jog, and we sat down in a sunny spot in the Plaza Avaroa with our coffees.

‘The constructions in the Laderas are in poor condition’, he remarked, ‘considering their location on the mountainsides. They would not last if it suddenly started to rain a lot - the water would collect in lakes down the hillsides, underneath the houses – it would be a catastrophe with the water washing away everything – a ravine of horror hitting down towards the heart of La Paz.’ Unfortunately, this is not a purely hypothetical scenario. Every summer, as the rains arrive, dozens of homes start slid­ing gracefully down the hillside and into oblivion. Built like puzzles, they unfortunately disassemble just as easily as their child’s-toy equivalent, leaving many of those that manage to survive homeless every year.

The houses are made of red bricks and many remain unfinished with construction wires sticking through so the owners can expand their buildings by adding more floors. The explana­tion for this is that home owners do not have to pay taxes while their house is unfinished.

Many of these households do not have basic services such as electricity or water facilities. This partly explains why residents organise their abodes in tight family communities. As Leonardo explains, ‘It is more realistic for a community of households than for a single household to lobby the govern­ment in order to get access to these kinds of services.’

On entering La Paz itself I quickly found that the city’s buildings com­prise a wide range of architectural styles, all packed tightly together. The centre of La Paz boasts modern, New-York-style skyscrapers whose reflective façade is built of sturdier, costlier stuff than those ephemerally twinkling Ladera mirrors that so struck me on arrival. These varying colours, sizes and shapes make for a salient contrast with the surrounding moun­tainsides. It is almost as if man had tried to imitate the craggy peaks around him. When asked about these overwhelming edifices, Leonardo stares straight ahead and hesitates for a second before continuing:

‘I consider these big, tall buildings a violation of the law system: as soon as the construction companies have their permission to build, they do not care - mas es mejor - the more flats you can build on one floor, and the more floors, the better, it is all about money. The constructors think in terms of economics not of aesthetics. As a result they use cheap materials like concrete and bricks. The Monoblocks are only modern in the sense of being functional and simple. La Paz has expanded rapidly as a metropolis during the last five decades and new buildings are still being constructed everywhere you look.’

‘As the city started to grow massively during the 60’s and 70’s the architec­tural style here was under influence of the USA and Europe – El Banco Cen­tral is a building that symbolizes that. These modern Monoblocks stand next to traditional baroque buildings from the colonial period, of which the San Francisco church and the National Art Museum are clear examples.’

Leonardo uses the term ‘construc­tors’ instead of ‘architects’ because he cannot think of the minds behind these buildings as true architects, only money-minded engineers. But as the possibility of jobs and money con­tinues to spur mass scale migration from the countryside to La Paz and El Alto – with a nine percent increase in migrants to El Alto every year - one can perhaps understand this ‘mas es mejor’ approach.

‘Other big cities are typically known for their style of architecture’, says Leonardo, ‘or have a special famous building with a symbolic meaning. We do not have that here in La Paz. Our city, as the highest capital in the world, has the mountains that take the focus, and especially Illimani, which you can spot no matter where you are in La Paz. The architectural skyline is less significant than the view of Illimani.’

There are some traditional Bolivian houses still tucked away in La Paz, hidden behind the tall new buildings. Leonardo and I left our coffee spot and went for a stroll in Sopocachi where he pointed out some of the older build­ings. They are pretty houses, built to charm, and seem somehow left be­hind. These however, are a lucky few, Leonardo explains that in fact many buildings that still have original, his­toric interiors have had their facades built over to create a modern style. I ask Leonardo what he thinks the city will be like architecturally in the future:

‘I think eventually the architecture will become more uniform and we will get a common city style like other metropolises, but the people have to learn to appreciate aesthetics. And we need money.’

‘Anyway,’ he adds,’I don’t think it will be with me behind the desk. I wish to go back to Europe and work, be­cause I feel the desire to design, not just construct.’