The City of the Rings 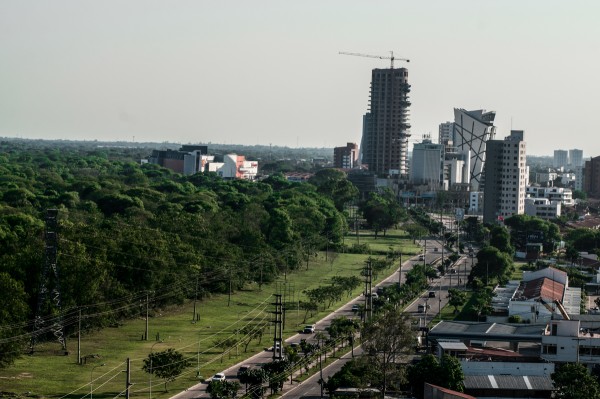 The city of Santa Cruz de la Sierra, in eastern Bolivia, is home to well over 1 million people, and is widely known as the economic center of the country. It is a city not shown in postcards, but whose contributions, both economically and culturally, are vital. And here, a better future is being built on a daily basis: according to the  National Statistics Institute, 52%  of the total area of Bolivia under construction is located in Santa Cruz.

Heat, blue sky, the boiling asphalt and a cool breeze that dries the sweat that falls from the forehead, we are at the time of year when winter still wants to exist. Yet locals know that in Santa Cruz, spring it is eternal. Here, it is nearly always perfect conditions for exploration.

So you take your bike and pedal your way from the Villa Olímpica, a huge space where motocross and similar activities take place, along the 5th anillo, or ring, at the  south of the city. A few short years ago, this spot was far away, a distant destination for those in the city center. Now, it is part of a usual route, and the streets surrounding it are paved. The lack of signals may be confusing, but still you manage to find the street name you are looking for in the stenciled signs that radio taxi drivers place on street corners. Here, if the municipality doesn’t do these things, the people manage it themselves.

Santa Cruz has grown and continues to do so, as the regions arenals, or areas of sandy land, seem to migrate further and further outward. Where are they today? The ninth ring? That it is almost Cotoca, to the east, at least 45 minutes by bus from the center.

Radials and rings create a system that any visitor to Santa Cruz should be familiar with to understand this city. Back in the early 1990s, this system exploded and expanded, growing until the fourth ring to the west side, where it collided with the Pirai River. Today, the city extends from the historic center,the Casco Viejo, to a ninth ring.

The first ring surrounds the Casco Viejo, and is about 12 blocks in diameter. A second ring surrounds the first at a distance of another 12 blocks away, and the pattern repeats to create a third inner ring, leaving some space for the third outer ring. A fourth ring is about another fifteen blocks out, and so will expand the city. Radials cross the city from north to south, from east to west, and all directions in between, like the spokes of a bicycle wheel. This patterned plan has been shelved, but remains as a sort of transit web.

The road is long, but you don´t hurry. Now you have to get to the other side of town, at least one hour of pedaling. But the city is flat, and the challenge is both exhilarating and comfortable. For many years the city only grew sideways, but along the way across town you can’t escape the fact that something different is happening: the city is growing upwards. The gigantic Palacio de Justicia, once the only building piercing the skyline, is today accompanied by a dozen new buildings, particularly to the north, where you are headed.

Although traffic is rough and road safety education is lacking, bicycles have been taking over the streets of Santa Cruz. There is no design for bike paths, yet cyclists use the streets to move alongside cars and buses. Elsewhere this may not mean too much, but here it represents overcoming significant challenges to have commuters pedaling on two wheels on the city’s roadways. There are no ups and downs, and with enough air to power the lungs of these bikers, many groups are being organized to ensure the rights of cyclists, and to include these rights in the urban planning.

To cross through the Casco Viejo is to experience the Santa Cruz of yesteryear in full conversation with the Santa Cruz now. Despite a modern building boom in the 1970s, galleries, courtyards and aljibes of decades and centuries past have been recovered, and today remnants of the classic Santa Cruz style remain. Under the protection of the mayor, it is now forbidden to demolish or renovate these architectural artifacts without municipal permission.

The Catedral Mayor de San Lorenzo, with its elegant brickwork, recently celebrated its 100-year anniversary. Perhaps the most emblematic building of this city, it blends perfectly with La Pascana, a remodeled old building with exposed brick which houses a courtyard and a gallery.

This architecture represents a moment in history, and serves as a tangible reflection of a key concept important to any cruceño building an ideal home: no matter how much money is needed to invest, a home must have a barbecue and a social area. Although current trends can leave this colonial style to the aluminum minimalism and neo-rationalism popular with contemporary designers, some have managed to combine the galleries and courtyards of 500 years ago with modern design, retrieving some of the forms of the past to marry with future-forward aesthetics.

Places like the restaurant-museum El Aljibe remind us of the not so distant past, where the size of the aljibe determined the wealth of a family. And of a place where the food tastes like it was made by an elderly grandma who spent a lifetime here, a city that now has four huge shopping malls that seem to blend in more and more every day as the architecture in Santa Cruz modernises. The Ventura Mall is Bolivia’s largest, and is home to CineMark and the Hard Rock Café. It stands in a neighbourhood almost reaching the Pirai River, an area that used to be considered the city limits of the 4th ring to the east, but that is now one of the more developed areas of the city. A bridge was built to cross the river nearby, and this area is where the rich captains of industry build modern business centers, luxury condos and even artificial beaches, equipped with electrically generated waves. Not many buses arrive here, as those who live and work nearby access the area with private cars. You, however, choose to arrive by bicycle, a routine performed by hundreds of cyclists every weekend.

Although there isn’t even an avant-garde style generated by and for cruceños, there are colorful new buildings that arouse people's curiosity. One such building, the Omnia Lux, a brickwork tower, has gained recognition from the Faculty of Architecture of the UPSA (Universidad Privada de Santa Cruz), the top university in the city.

So what comes next for Santa Cruz? What is to be done with this merging of old and new architectures? As you finish your ride across this crowded city, maybe you would think that the old architecture of the past must retain its traditional essence and become the 'must have' of the new architectures emerging in this city that every day grows bigger and, like its citizens, becomes more cosmopolitan. 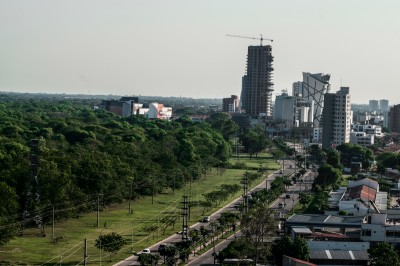 The author would like to thank Arch. Ernesto Urzagasti, Guillermo Mediana and Eliana Rivero for their insights and expertise in the research of this article.