The Chimanes of Maraca’tunsi, Bolivia, after their Sacred Hill was taken from them 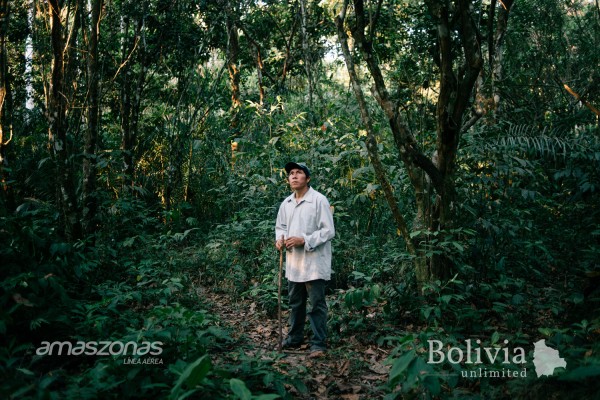 Santos contemplates the space where his house was back in the 1990s, now it is full of bushes and trees.

This is a fragment from the article 'The Chiman of Maraca'tunsi, after their Sacred Hill was taken from them, with the support of the Rainforest Journalism Fund and in association with the Pulitzer Centre.

‘How long is the strip?’ asks Casimiro Canchi Tamo, a Chiman community member.

'It’s around 700 metres long,' replies Santos Canchi, his cousin, as they walk across a huge deforested space in the middle of the rainforest, around half an hour from Maraca’tunsi, a Tsimané community from San Ignacio de Moxos in the Beni region of Bolivia.

'How often did planes arrive?,' I ask.

'Once a month, they bring supplies,' replies Santos.

'Until what year did they come?' 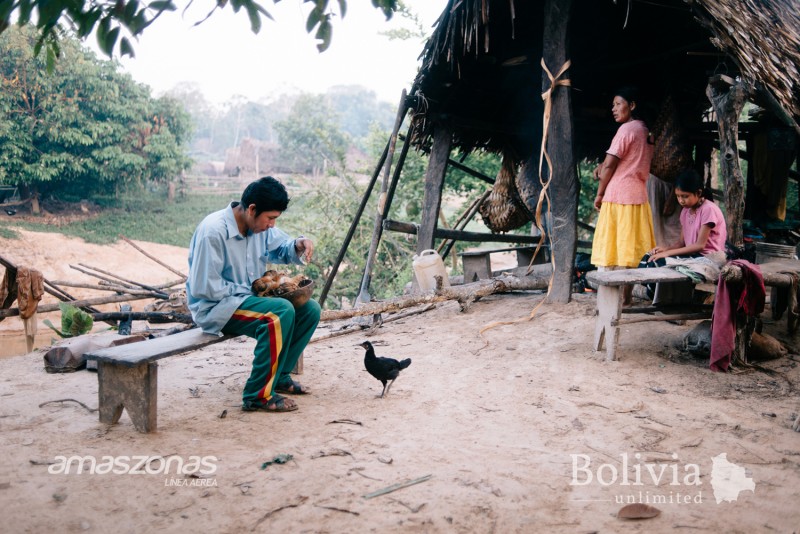 Santos and his family during a common morning.

Santos explains that the small planes of the San Ambrosio timber mill arrived to the area in 1990 to exploit the wealth of the rainforest, and to facilitate the transportation of food, supplies and people, they created a landing strip close to where the logging took place in the middle of the Bolivian Amazon.

It’s half past four in the afternoon, and it’s a Tuesday, in September 2019. We walk through the landing strip that still appears to be in good condition. It’s around half an hour from Cujma’tunsi, where Santos and Casimiro were born and where the loggers community was set up.

Santos, is 28 years of age, he has light skin, slanted eyes, a small body and wears a denim visor.

He’s one of the few members of the Maraca’tunsi community of around 8,500 who speak fluent Spanish, the majority of which preserve their native language. 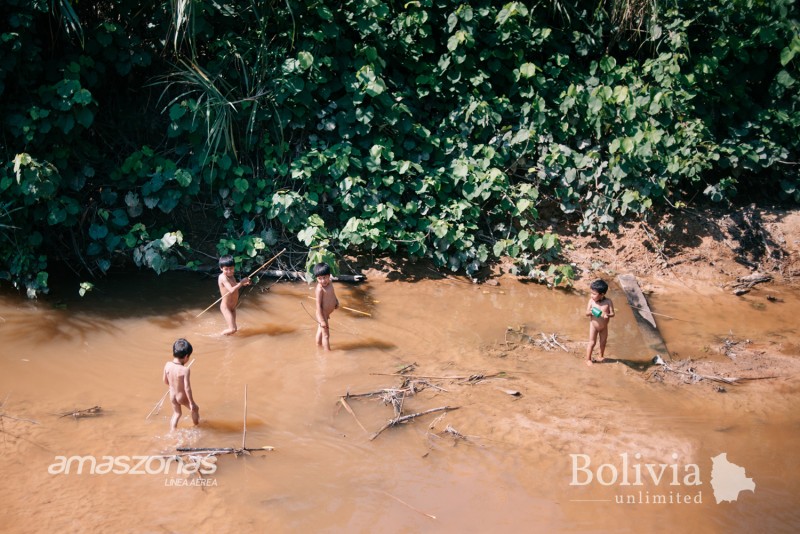 From an early age, chimanes children learn to hunt and fish with the bow and arrow, indispensable tools for survival.

Behind us there’s a Chiman couple with their child on the mother’s back, who are taking advantage of our visit to gather oranges from neighbouring trees. It’s not a place that they often visit.

The arrival of the company came after the Bolivian state provided concessions for these territories inhabited by indigenous communities towards the end of the 1980s. This occurred because in 1986, the state created an executive order which removed the protected status of around 1.2 million hectares of rainforest in the Bolivian Amazon, known as the Chiman Forest (Bosque de Chimanes). This area includes multi-ethnic indigenous territory where Maraca’tunsi and Chiman indigenous land is found, explains Fátima Monasterios, an investigator for the Centre for Social and Legal Studies (CEJIS).

'Despite the fact that there was knowledge of indigenous presence in the Chiman Forest, when they were providing the concessions, they didn’t consider the negative consequences that would arise for the communities residing in the territory,' Monasterios explains.

At that time, seven companies were given permits, many of whom had already been illegally present in the area before exploiting the land. Many were particularly interested in mara trees, which supposedly produce better quality wood.

What Manuel Canchi, Santos’ grandfather, remembers most is that they cut down and destroyed the largest trees in his territory. The presence of these companies and the clearances of land in the Bolivian Amazon were some of the main reasons why on 15 September 1990, an emblematic march of indigenous communities in favour of territory and dignity took place. 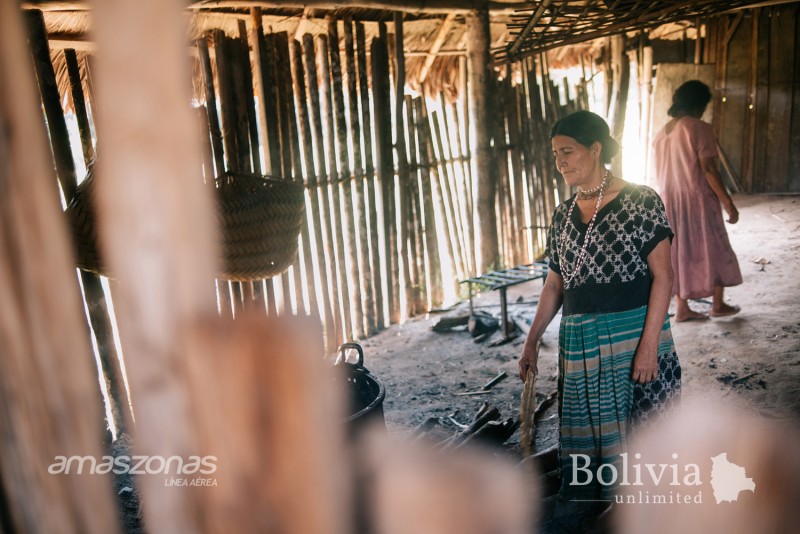 Chimanes women are responsible for household chores such as cooking, which is carried out in wood and in groups.

'The march of 1990 was an important turning point and it could even be considered as a foundation of a movement. It’s something magical, the first moment in which the state acknowledged the existence of indigenous people,' Martín Torrico, an investigator of the Centre for Investigation and Promotion of Rural Populations (CIPCA) explains.

After 35 days of walking from the city of Trinidad to La Paz, the government approved four executive orders that would benefit the indigenous people. One was the DS 22611, which declared that the Chiman area was now recognised indigenous land, and also recognised 352,000 hectares that belong to the Mojeño Trinitario, Mojeño Ignaciano, Movima, Yuracaré and Chiman communities.

What’s more, the Area for Rainforest Use was established, which meant that logging companies could only occupy an area for a maximum of 20 years and after this period the land would be returned to the indigenous people.

The logging company San Ambrosio, that belongs to the larger conglomerate Hervel and that was already exploiting land in other parts of the country, arrived to the Bolivian Amazon. They established themselves in the mid-1990s a few metres from Cujma’tunsi, which was home to around 12 indigenous families. This didn’t stop them however, as the area was rich in mara trees and almendrillos, or cujmas in the Chiman language, which is actually the origin of the name of the community and the name of the river of the settlement.

The presence of San Ambrosio drastically changed the lives of those living there, and since their arrival, the area and even the river had been renamed as San Ambrosio. The loggers outpost they built put an end to the tranquility of Cujma’tunsi.

'The companies extracted wood, they cut down trees with huge machines that made a lot of noise,' Don Manuel remembers as though it was yesterday, on the patio of his home in Maraca’tunsi, where he fled to shortly after San Ambrosio arrived.

Manuel is 90 years old and is the only nonagenarian of Maraca’tunsi, which means a place where the oranges grow, or also orange orchard. 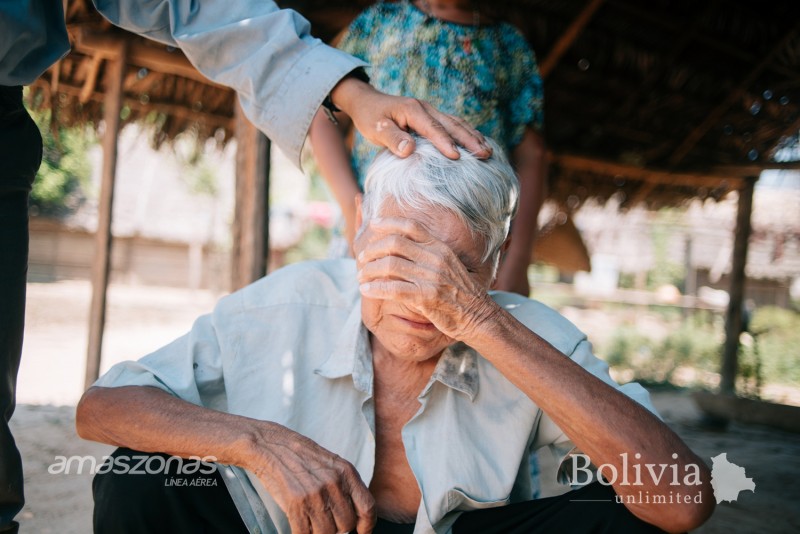 Manuel Canchi, one of the first inhabitants of Cujma’tunsi who was expelled by the San Ambrosio logging company to Maraca’tunsi.

He was one of the first inhabitants of the area when he arrived there with 18 years of age in the 1940s from the other side of Chiman Forest. Him and his wife along with other community members walked more than 140 kilometres in search of the Sacred Hill.

The Sacred Hill was devised by indigenous people of the lowlands, known as the Mojeños, due to the fact that towards the end of the 17th century, the ancestral inhabitants of Gran Mojos were forced to flee due to the occupation of their villages by creole and mixed people.

'The distancing of the populated areas towards the forest was something constant for the Chiman people,' says Monasterios.

That’s why the Chiman people, like the Mojeños, the Yucaré and the Movimas, were very mobile, and they always went in search of new places that would provide them with adequate living conditions, a process of re-appropriation of their territory.

'My grandparents came here searching for Sacred Hill, to live well, so they didn’t have to fight. My grandfather told me that they cleared just enough space to produce their chicha (traditional indigenous drink made from fermented corn) and their food,' Santos recounts.

His grandfather Manuel can no longer see nor hear and has difficulty walking alone, but he still retains his memories about the San Ambrosio invasion.

'What is it you remember most about when the loggers arrived?,' Santos asked him in Chiman.

'They would cut down the trees and didn’t pay anything. They would loot the forest,' he said whilst he dried the tears coming from his eyes.

'They looted everything. Now I need wood for my canoe for the rainy season but there’s nothing left. They left nothing in exchange for everything they took, not one health centre, not one telephone line, nothing,' he said. 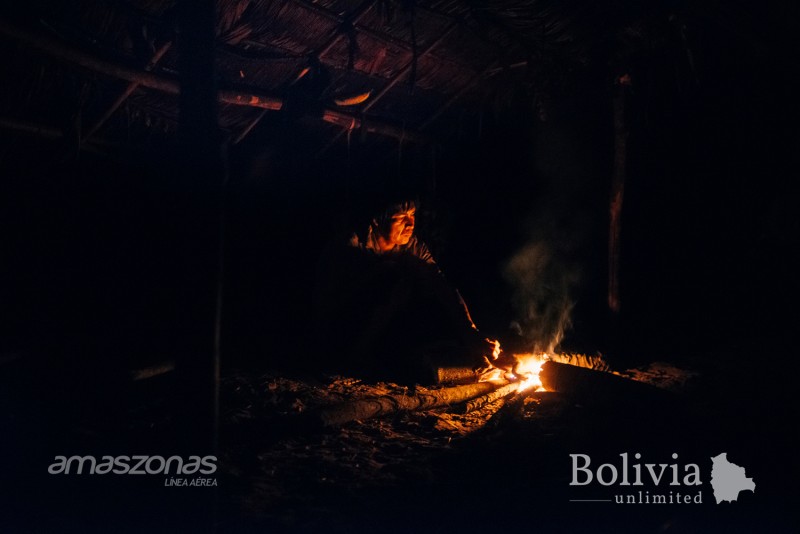 At night fire is indispensable.

When Santos was eight years old, the families of Cujma’tunsi decided to abandon the area. Fabio Garbari, a priest from the San Ignacio church, says it was a displacement caused by the loggers.

'The company was more important than the community, so much so that they were displaced. They’re all in Naranjal. There’s basically been a displacement. The Chiman left, they aren’t fighters,' says Garbari, who has accompanied the indigenous fight in San Ignacio de Moxos since 2013.

That’s how Manuel and the rest of his family arrived to Maraca’tunsi, where they currently live. From there we walked a little more than an hour among pathways and trails that connect the two areas and that can only be crossed on foot. Part of the area which the company inhabited has closed in these past nine years.

At around 1,000 metres from the end of the landing strip, Santos hears a noise that frightens him, he raises a stick from the ground and immediately, the aggressive barks of dogs get closer. They belong to the security guard who watches over the San Ambrosio machines that they left in 2010, 20 years after the concessions were provided.

The dogs get closer but they are stopped by Casimiro and Evaristo, another community member and a teacher, from the guaraní community, that arrived a week earlier. Santos gets frightened coming here, which is why he always does so accompanied by a group of people.

'Calm down, calm down' says Mucheiro to one of the dogs and then turns to us, 'Good afternoon'.

We all replied with a greeting, as we arrived at the entrance of the sawmill.

'We’ve come so that our brothers can get to know the place,' Santos says.

'Go ahead,' he responds, and stops to talk with the teacher and Evaristo

'They cut the wood with this,' says Santos, who looks over at the machines abandoned by the company. There’s a high power light motor and bundles of wood left over that were never taken out of the area.

'Will these machines work?' Manuel Seoane asks, the photographer with whom we travelled

from La Paz a week ago.

'They should still work but maybe you have to change a few pieces,' Casimiro responds.

'But we don’t want them to take more wood from the forest. They didn’t leave anything good behind for the community and the territory only lost out,' he says. 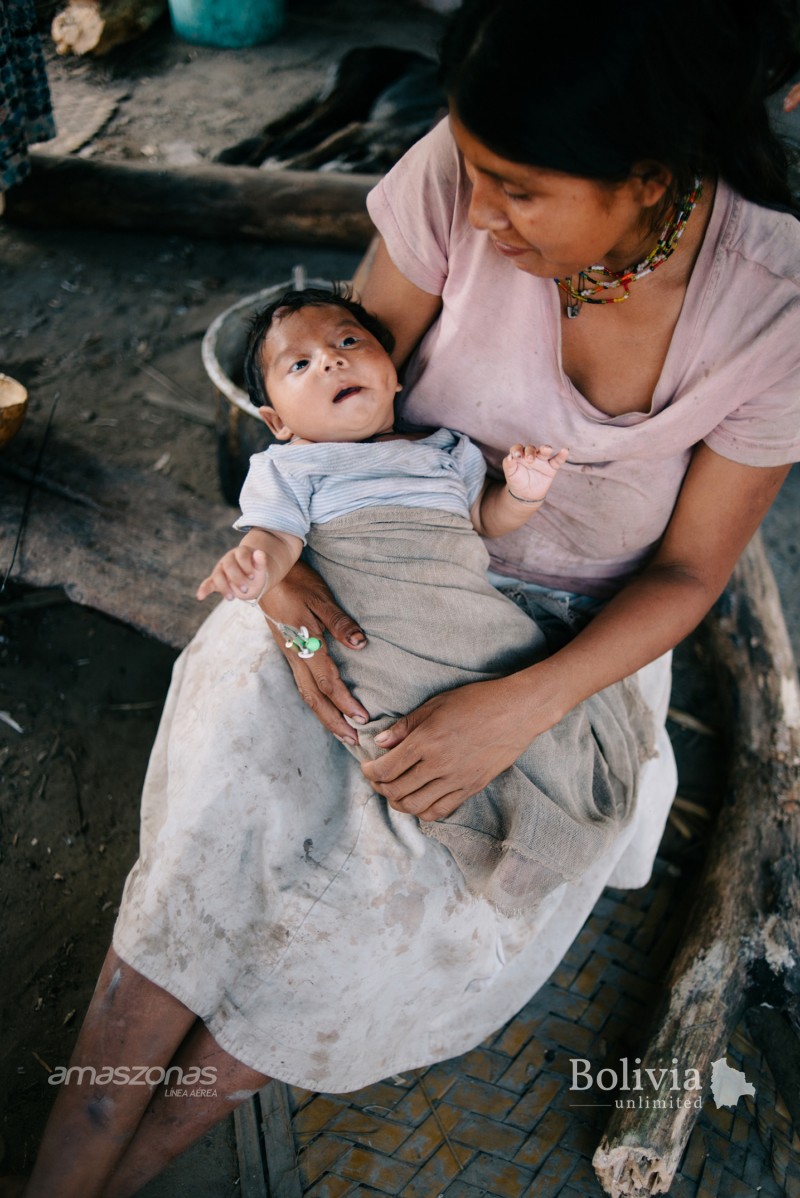 The expectation that the company would return emerged in 2011, when after the territory had been returned to the indigenous people by the state, the government of Evo Morales created the Administrative Resolution of the National Agrarian Reform Institute, that declared this area would become available again, and would be named a ‘fiscal territory.’'Settlements are prohibited, as well as occupations of individuals and collectives on government land,' a sign says close to the logging outpost, that remains there despite no longer being a ‘fiscal territory’ as of August this year.

Five minutes from the loggers outpost is the place where Santos was born. Manuel takes us there and we get further away from the dogs. The area is covered with lime and orange trees and other species that cover his home, of which there is no trace left. The exodus of Cujma’tunsi included the homes that were moved to Maraca’tunsi.

'Here we made another home, but we’re going back. I’m going to make my new house, I don’t want to abandon the Cujma’tunsi community'.

'I want the machines to go away'

'It would be better if they left,' he says, as he walks towards the place where the house once stood and lifts up a branch, 'We’ll have to clean up a lot'

'Why haven’t you thrown out the loggers rather than moving to a different place?'

'Because my grandparents didn’t have the capacity to get them out, but now that we’ve organised ourselves with other communities, we have more strength to get rid of them, because we don’t want them to take more wood from here,' he says as he begins walking.

On the way back, we are taken through another route, that way we avoid the dogs and the loggers outpost that’s a potent symbol of what has been stripped away from them that continues to be a threat to their livelihoods. 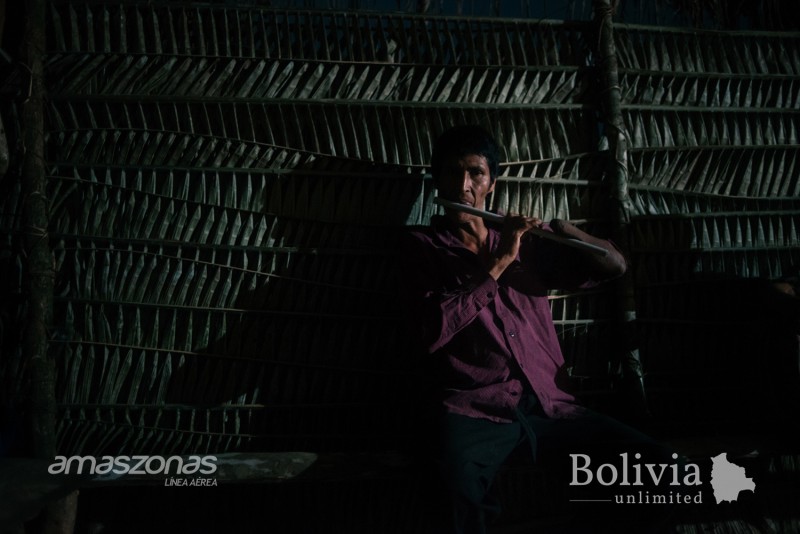 Casimiro has many skills, apart from being the community healer, he is a skilled musician and is usually the party entertainer.