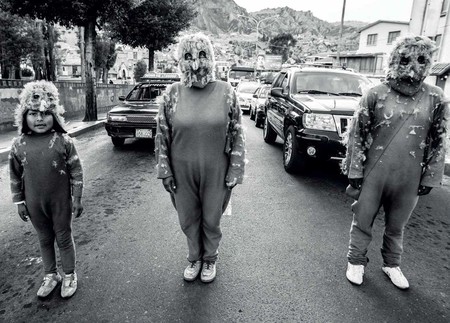 'They are here on Thursdays and Fridays' was the first thing we were told. Then we got: 'No, they aren’t here today. They only work from the 1st to the 15th of every month'. Yet despite following these instructions, the family of chicken jugglers was nowhere to be found. A group of Argentinian jugglers suggested we might not find them in La Paz as 'sometimes they travel to Cochabamba'.

When we finally tracked them down, we found them juggling away in their chicken costumes in Zona Sur. This small family of three—Mario Mamani, Lucy Flores, and their daughter Iveth, who is 6—makes a living entertaining drivers while they wait for the traffic lights to turn green.

From rural egg to city chick

Mario was born in a rural area on the outskirts of La Paz. He moved to the city with his parents when he was only a few months old. His earliest memories are of him playing with the other kids in the neighbourhood. He smiles as he tells me how his 'best childhood memories are from when I was four or five years old'.

When he was eight, the joy of the city and of playing with his friends on the streets in La Paz came to an end. His parents decided to move back to the rural community where Mario was born. With none of his friends around Mario felt lonely. Communicating was also a challenge as people in that area only spoke Quechua.

At 13, he escaped his birthplace and moved in with his aunt and uncle in La Paz, after which he would only see his parents a couple of times a year. Despite his young age, living away from his parents didn’t bother him. 'My parents never did anything for me', he says. 'Our relationship was never that close.' Not that Mario’s upbringing was bad or strict, he explains, 'I was just always in love with the city'.

Living with his aunt, uncle and his two cousins brought its own complications. The five of them were crowded into a single room and the living conditions were poor. Taking on the role of Cinderella, Mario was constantly cleaning, cooking and waking up early to keep the house on its feet.

People from rural areas who moved to the city usually studied at night. Mario, however, went to school in the morning along with his city peers. It was better for him, he says, as morning classes were often more engaging because city people were typically more educated.

It was hard to get his homework done at his aunt and uncle’s house. Occasionally, Mario would go out and do his work on the streets, using the streetlights as his reading lamp. On other occasions, he had to give up doing his homework because of his chores. After leaving this home he attended military school for two years, where learned how to grow plants and vegetables. That was his last form of education.

He says he had to give up his dreams to move on with his life. 'The worst decision of my life was to give up studying' he says, 'I really wanted to be a teacher or an architect.'

Soon after settling back in La Paz, Mario started working with jugglers who dressed as zebras, much like the ones you’ll find on any of the main arteries of the city. It is here he met a man called Jimmy Angelo, who worked in theatre and inspired him to make it in the world of jugglers. Mario remembers him as a very kind man, someone who has remained in his mind as a positive and inspirational figure.

As a zebra, Mario gained more than just a good group of friends. It is here him and Lucy came together. The two of them met at a mutual friend’s party and started dating soon after. They later moved in a shared apartment and have been together ever since. They describe their bond as a very close one since the beginning because they were good at taking care of each other.

Lucy, the hen and mother of the team, grew up in La Paz with her parents and seven siblings. Their house had two bedrooms, the father slept in one and left the rest of the family to cram into the other. 'No one wanted to sleep near my father. He was very violent.'

Lucy remembers how her father used to kick and abuse her mother. When I ask about Lucy’s siblings she starts getting very emotional. 'There used to be seven of us', she says, and pauses. Then her voice starts to break slightly. Her three brothers died from the vicious beatings of her father. 'But my mother was a lovely woman,' she says, and dries a tear from under her chicken mask.

Looking down at Ivett, Lucy wraps her arm around her daughter. Iveth slowly looks up with her big eyes while sipping juice from a carton. She seems capable of making everything alright with a single blink.

When her father died ten years ago, Lucy had to put an end to her studies in accounting. She still dreams of going back to university or working in childcare.

'The happiest day of my life,' Mario says, 'was two years ago when I was juggling around Christmas time and a lot of people showed up with a TV crew'. He remembers receiving a lot of recognition and applause from people passing by. With all eyes on him, he never felt prouder or more appreciative of his work.

The idea of chicken juggling dates back to 2010. Most jugglers, he tells me, go straight from juggling school to the streets. Instead, Mario thought of an original idea and came up with the chicken costumes.

Initially the idea included juggling eggs, but this was quickly put aside as they had a tendency to break. Mario then moved to making his own eggs out of balloons filled with rice to build up the chicken illusion.

Another time, the family tried dinosaur costumes, but they were not as well received as the chicken attire.

The costumes, they tell me, are all homemade. The materials for all three chicken suits cost about Bs. 200 altogether. It doesn’t take an expert eye to realise they have been in constant use for quite some time. 'We made the costumes ourselves. They are a bit worn out, but we are working on new ones', he says, his face covered by a mask with a crooked beak and worn-down yellow feathers.

The costumes are made of brown fleece with yellow feathers sewn on, most of them far apart from one another, suggesting either that the feather supply was low at the time of the making of the costume, or that the wind and wear have done away with most of them.

Mario estimates that the family’s daily income as chicken jugglers is approximately Bs.150 on weekdays and Bs.200 on weekends. On an average day, the family wakes up at 8 am and then travels for a full 1,5 hours from Nueva San Pablo to Zona Sur. Once here, they often juggle until 6 or 7 pm.

Over the past years, Mario has tried to improve his juggling technique, moving from juggling three balls to four. 'I’m practicing with five and want to be able to handle six.'

With the influx of travelling jugglers from Argentina and Colombia, the number of them working at traffic lights has increased steadily. While this can be fun for pedestrians, the increased population density of street performers brings with it a very different story for the jugglers themselves. Mario, Lucy and Iveth have had their share of unpleasant encounters with other jugglers who fight over the more lucrative intersections.

A while ago, they got into an argument with a group of Argentinean and Colombian jugglers, who tried to claim the corner where the family was working. The scene quickly escalated into a fight involving the whole family. Even sweet little Iveth got a few hits from the aggressive jugglers.

Outraged, the family called the police who came and broke up the fight. Unfortunately it was not over yet. The Argentinean and Colombian jugglers returned with sticks that were lit on fire. In a bout of rage they set the family’s chicken costumes alight, putting their lives in danger.

The rivalry on the streets also means that the family operates on different spots. Having just about 5 places in the areas of Calacoto, Plaza Abaroa and San Miguel they try to avoid the ugly confrontations.

But despite the difficulties and occasional confrontations, almost four years on, these lovable chickens have earned their spot on the street, getting increasing recognition from pedestrians and drivers alike. They have even learned to juggle with 4 balls, upping their juggling rank among their peers.

But some rivalries never die, and continue to be fought using underhanded methods. Remembering what I was first told by the Argentinean street jugglers when I was trying to find the family, I ask Mario about the reason for their frequent visits to Cochabamba. Mario’s face hardens, as does his tone: ‘we never travel to Cochabamba'.