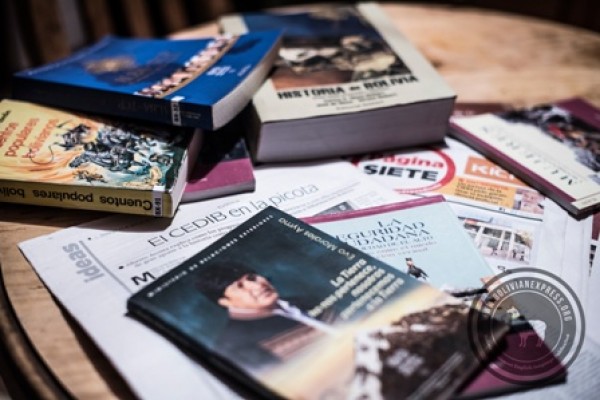 The Past, Present, and Future of a National Archive

Two months on and the noise has not yet died down. On March 21 this year, Juan Ríos, the newly appointed rector of Cochabamba’s state-run UMSS (Universidad Mayor de San Simón) – where the headquarters of CEDIB (Centro de Documentación e Información Boliviana) has been based since the NGO’s inception back in 1993 – gave the research and information facility 48 hours to vacate its premises. These controversial marching orders have been met with widespread criticism across Bolivia, in the mainstream press, and, of course, from those inside CEDIB itself.

Throughout its near-25-year existence, CEDIB has provided a crucial academic and historical resource for Bolivia. Today, it houses 11 million physical and 3 million digital newspaper archives, alongside 77,000 books and a copy of every law in the country’s history. Its higher purpose, though, and one its director, Marco Gandarillas, has gone to great lengths to emphasise, has been to hold incumbent governments to account – regardless of their political leaning – with evidenced humanitarian arguments.

It is perhaps no surprise, then, that its eviction is being widely framed as a political manoeuvre. Página Siete, a daily newspaper with an anti-MAS track record, even went so far as to label it as ‘an example of political and ideological intolerance’. Given the current administration’s troubled relationships with many NGOs, many critics agree with this explanation.

As an argument, it carries the weight of history. Vice President Álvaro García Linera has long and painstakingly sought to redefine NGOs in Bolivia as vehicles for Western imperialism and intervention. In his book, Geopolítica de la Amazonía, he makes the bold yet thinly substantiated claim that ‘in third world countries, as in the case of Bolivia, some NGOs are not really NON Governmental Organisations, but rather Organisations of Other Governments in Bolivian territory’. This scapegoating has served as a justification for the Bolivian government to claim control of organisations as their own. In March 2013, President Morales passed Ley 351, decreeing that any organisation or NGO must be legally recognised by the state, effectively stipulating that all NGOs, including CEDIB, must be aligned in their work, actions, and objectives with national policy.

This ideological oppression has been a thorn in CEDIB’s side through recent years, coming to a head in June 2015 when, a month after the new Decree #2366 (opening natural protected areas to mining and oil extraction), the government announced that any NGO that interfered with said exploitation would be expelled from Bolivia. CEDIB has been one of extractivism’s biggest opponents ever since.

It seems logical, then, that the appointment of the new rector at UMSS, who has established ties to MAS, and the subsequent forced removal of CEDIB are no coincidence. Additionally, the change comes on the heels of Bolivia’s courting of investors from China, and the announcement that CEDIB will be replaced by a Confucio Chinese Institute.

This is but one, albeit very well-documented, side of the story. However, it would be irresponsible to fail to acknowledge that there might be another.

Rector Ríos’ justifications for the eviction are twofold: that CEDIB have overstayed their agreement with the university for a decade, paying no rent, maintenance, or light and water bills; and that the expanding university needs the space for the Confucio institute. ‘We have an important agreement with the institute,’ he explains. ‘It is a partnership that has brought many benefits to the university. If we don’t comply with their requirements, we run the risk of them having to leave to the Universidad San Andrés.’

As much as it might be in the government’s historical character and future interests to disrupt the work of and evict CEDIB, it must also be recognised that, given its often confrontational relationship with the government, it is in the interests of the NGO to pin its eviction on the state, continuing the narrative of political oppression that has dominated, and clearly inhibited, its past. But it is important to note that officially UMSS has constitutional autonomy, so the government technically cannot intervene. While the new rector clearly takes issue with CEDIB, whether due to the organisation’s lack of recompense for the university, or an unspoken issue with CEDIB’s alleged anti-government sentiment, interpreting the government’s refusal to step in to save CEDIB as an active and driving force behind its eviction hinges on

assumptions of a political vendetta against the NGO.

The initial populist jump to brand this situation as ‘another example of government oppression’ could be a dangerous one. CEDIB’s modus operandi throughout its existence has been to provide an evidenced counterpoint to ill-advised and morally unjustified government policy. In this case, there is perhaps insubstantial hard evidence, nothing but the circumstantial traces this decision back to Morales, to claim so categorically that the government is trying to quash CEDIB. As such, CEDIB’s mudslinging could be seen to undermine the credibility of its noble objectives.

Perhaps more importantly, this narrative of government oppression is not one that should be taken lightly. It could be argued that there has been a certain degree of sensationalisation around this issue, which perhaps trivialises the more serious, more tangible examples of oppression that are out there, such as the neglect of the disabled in Bolivia, President Morales’ relentless quest to run for a fourth term in spite of a referendum ruling against it, and even the wider treatment of NGOs by the government.

Morales’ predecessor as president and political adversary, Carlos Mesa, while eloquently taking on the point of view of those in support of CEDIB, did touch upon a vital argument when he published this poem on his Twitter page, reappropriated by a variety of media outlets:

university, more so if it’s state-run

has the obligation to

Regardless of what is really going here, what should not be forgotten is that the rector, for whichever reason, has dealt a damning blow to CEDIB. The organisation, as yet unable to pack away the entirety of its extensive archives, has been consigned to a limbo that impinges on both the organisation’s work and those who use its resources as a research tool for their individual pursuits. While it could be argued that media coverage has shown just one side of this controversial situation, the real burden of responsibility, perhaps along with the blame, lies at the door of those with the power to preserve and cherish an organisation of national importance.