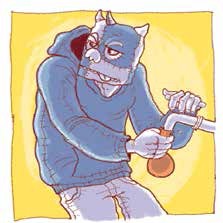 I knew the minute I felt it hit my backside. I has just experienced my first globo attack. I spun around to find myself face to face with a grinning boy, no older than ten years of age, clutching an oversized water gun in one hand, a bag of globos in the other, and exuding an almost disturbing level of pride with regard to his latest aquatic conquest. Unequipped to return fire as I was, I instead sprinted to the nearest stand with the intention of investing in the finest and most valuable of Carnaval weaponry: water.

Water is the most common form of ammunition during the sopping wet days of Carnaval. It would be impossible to take a stroll down El Prado and not encounter the classic array of water war artillery: oversized water guns, water-filled bags which, with a carefully cut corner, shoot water at impressive distances, and, of course, the most lethal of them all: globos. These makeshift grenades have managed to turn a seemingly harmless and rudimentary substance, water, into an effective firearm.

But how exactly did these water wars become such a ubiquitous aspect of Carnaval tradition?
According to a local Paceña woman I spoke with, the tradition dates farther back than most presume. Think Pre-Andean times, long before the 16th century arrival of Spanish colonizers. During this time cultural communities would celebrate between potato harvests with song, dance, food, and, of course, plenty of water. But they were not alone in their festivities.

The indigenous people believed that when pulling their potatoes from the soil, spirits were released from the ground. During their time of liberation, the spirits were free to join in on the debauchery. And so began the fun and merriment, during which rituals were performed with the intent to give back to the fertility goddess, Pachamama, who essentially governed the quality of the forthcoming harvest.

Once the festivities were over, however, it was important to ensure the spirits returned to the soil. The method of doing this was to throw water. Where? How? Using what? She couldn’t say, but water was thrown, thus inciting spirits to return to their usual business. The business, that is, of producing a plentiful harvest.

Interesting. I don’t suppose all of those engaged in Carnaval water play today -from the youngsters with their duck-shaped water pistols to the villainous teenagers powerfully throwing globos- realise they are actually performing a noble act worthy of their ancestors. With the abundance of water that flies around nowadays, I couldn’t imagine a single spirit overlooking the memo to return to the ground.

Since that time, and with the cultural influence brought about by Catholicism, the water traditions have continued to evolve. From eggs filled with perfume or coloured water, to water buckets being poured from balconies, to globos and water guns, anything goes during the Carnaval water wars!

It’s not always fun and games, however. The evolution of water artillery also brought with it more aggressive forms of participation. Individuals have become increasingly vicious in their balloon tossing tactics, opting to freeze the globos, or filling them with very little water so as to create smaller projectiles which travel farther and inflict greater pain on impact. The choice of weapons is also plentiful: the pear-shaped Payaso-brand balloons are known to be softer and larger compared to the pepino variety which creates small, hard and almost-perfectly spherical projectiles: perfect for bruising at a distance. Chemical warfare takes place here too, with Rey Momo foam used by carnival guerrilla fighters to blind victims and mark them with a white viscous fluid, making them ripe targets for further attacks. Skin rashes are frequent side effects.

Because these weapons have become so destructive, the Mayor of La Paz created a city ordinance that bans any and all sales of the liquid missiles. According to the Commander of the Municipal Guard, Miguel Zambrana, “[We] will not allow water balloons to be sold during the period of Carnaval. If found, we will proceed with their destruction”.

He wasn’t kidding. As I set out on the first Friday of Carnaval to observe water fights on El Prado, I was taken aback by the scores of officers present on the scene. How many officers does it take to keep a street full of teenagers in line?

A lot, apparently. Everywhere I turned, there was a cluster of uniformed men and women, all of whom were either speaking heatedly into their two-way radios or confiscating water-filled contraband. Confiscation, in this case, involves seizing the bag of globos and then squashing them one by one in front of the young, and usually wide-eyed, offender. Water balloons, a gateway weapon. Best nip that in the bud before it spirals out of control.

We stopped to ask the officers some questions, and were met with reluctance and vague responses. Not even two minutes passed before they suddenly took off on an ‘urgent call’. I saw them moments later tackling some very serious business: the confiscation of more globos. Duty calls.

A few days later I managed to find a woman in possession of two large bags filled to the brim with water balloons. My assumption was, of course, that she was involved in the black market for water weapons. I ought to handle the situation delicately, I thought, since by that stage I was only too aware that the sale of globos during Carnaval is prohibited.

I approached her and asked for the price for three water balloons. She shot me a confused and slightly disturbed look, and then informed me that they were not for sale. Approximately a half hour later I spotted her again, albeit in a more discrete area, selling a batch of globos to an eager trio of boys. I suppose I don’t blame her. In hindsight, I wouldn’t have trusted me either. A grown woman requesting globos without donning a poncho would give me reason to suspect.

Once the madness of Carnaval had dissolved away, I was surprised to find myself overcome with relief. Don’t get me wrong, I had a great time - but I can only indulge in my heathen ways for so long. In fact, I’ve never been more eager to return to my structured life. And who knew there would come a day I looked forward to going back to work - good, hard, honest work! By the depleted-yet-relieved looks on people’s faces as they returned to their routine Wednesday morning, it appeared I was in good company.

I think the Andeans had the right idea when they introduced this cathartic form of celebration. Take four days to shed your inhibitions and unleash that repressed need to attack strangers with water, and you will be rejuvenated for another round of structured life and hard work. That is, until next year - when tradition beckons for another round.

The Evolution of War

The past 25 years have seen the gradual appearance of expensive imported water guns boasting oversized water reservoirs and borderline-legal blast potency. With some ‘Super Soakers’ costing over $100 (half the minimum national wage), water wars have also evolved to reflect the deep socioeconomic rifts across society. Yet the poorer sectors of society were not to be left behind. Up until the turn of the millenium it was still possible to buy bombas for under Bs 30 ($4-$5). These makeshift water pumps were made by hojalateros using old milk cans, rubber recycled from car tyres, and a good dose of craftsmanship. With some skill and practice it was possible to shoot water at high power from these machines: the force of the blast was relative to the strength of the person operating them. Sadly they are no longer on sale, as BX Reporter Claudia Mendez learned when she visited the row of shops on Chorolque and Av. Buenos Aires. Doña Berta explained that they no longer offered them as they have been pushed out of the market by plastic imports. Now Super Soakers are left to compete with their cheaper imported Chinese counterparts.