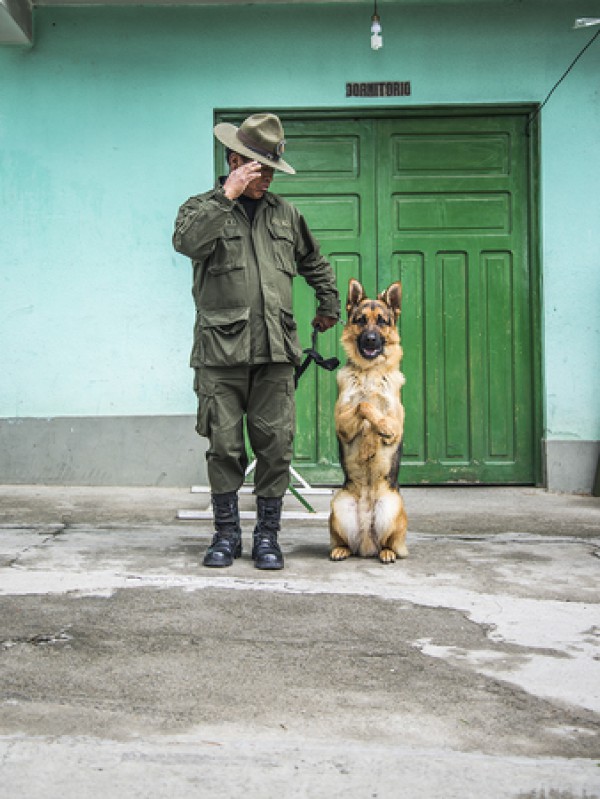 The command rings out around a modest training centre in Obrajes and four police officers hastily stand to attention. Beside them, with their two front paws raised in a solemn salute, are their canine companions.

Our first four-pawed professional readies herself for the morning's opening drill. Under a shaggy mass of thick white fur is Memo, a veteran of the Centro de Adiestramiento Canino here in La Paz. Despite her imminent retirement in May, this sprightly Old English Sheepdog hasn't lost her agility in her twilight years. As she tears around the obstacle course with ease and precision, her experience is clear.

'It's very difficult to say goodbye to dogs like Memo who have served us for many years,' Major Walter Laguna tells me, 'Our dogs are a part of our family.'
As I look around the Major's office, this fond sentiment is echoed in the room's decor. The grey walls are brightened by portraits of the academy's star dogs - a diverse line-up of German Shepherds, Rottweilers and Labradors. But taking pride of place amongst the myriad of framed accolades stands the imposing black-and-white image of a young officer and his canine partner.
'Sergeant Villanuevo Sánchez Cerro was killed alongside his dog Thempes whilst alerting the rest of their squadron to an ambush set by Che Guevara's guerrilla insurgents,' Major Laguna tells me. 'They saved many lives that day. The event showed us just how important police dog work can be.' While the incident occurred almost 50 years ago in April 1967, it certainly lives on in the collective memory of the officers.

Since its creation in 1965, the Centro Nacional de Adiestramiento de Canes has provided invaluable support to Bolivia's police force. Here at this modest complex, perched on the edge of a cliff in Obrajes, you can find the country's most valuable four-legged professionals. Each of the 16 dogs at the centre have one infallible gift that sets them apart from their human counterparts: their keen sense of smell.

'Dogs can learn to recognise and remember over 10,000 different smells', Lieutenant Pabón tells me as he prepares an elaborate exercise for the dogs' morning training. Today's focus: explosives.
With the final touches in place, Lieutenant Pabón enthusiastically beckons me over to inspect the fake crime scene. Before me are five identical motorbikes, but, as I am shown in a theatrical demonstration, one of the bikes is rigged with 'explosives', while another is stocked with dog treats as an olfactory temptation.

First to take the test is Mike, a stocky chocolate Labrador. Mike’s permanent grin seems to stem from the constant stream of encouragement he receives from his equally cheerful handler, Officer Calamani. Determined and inquisitive, Mike inspects each motorbike with care, lingering at certain stops and often retracing his steps, as though aware of the responsibility of the task.
Then, satisfied with his decision, Mike lies down in front of the offending bike and watches Calamani expectantly. His handler approaches him slowly, with one hand hidden behind his back. Using his free hand to momentarily distract Mike, Calamani swiftly whips his hidden hand from around his back and drops a brand-new tennis ball in front of his dog.

'The activities are just like games for the dogs', Lieutenant Pabón tells me, watching me somewhat bemused as I fawn over the triumphant Mike. 'When they complete a task, they get their toy as a reward. That way they are always happy to work.'
This reward-based method of training is clearly effective, as each dog completes the exercise without putting a paw wrong. Even for Rocky, an excitable and easily distracted young German Shepherd, the promise of a new bone to chew is motivation enough to stay on task.

As each of the handlers break their stoic composure to lavish praise upon their dogs, the close bonds between the pairs are apparent. Flitting from duo to duo, I amass an extensive collection of personal stories from the proud dog handlers. Officer Usnato, who has been working with the same Golden Retriever for three years, happily recalls how his dog was declared national champion at an anti-explosives course in Cochabamba. Eager to tell me of the centre's successes, Lieutenant Pabón recounts how last year the dogs worked together to successfully find a missing 7 year old girl who had gotten lost in the woods. And not to be outdone by these grand achievements, Calamani draws me aside to show me how Mike can open his cage by himself.

Despite these great success stories, the centre has suffered some unfortunate setbacks in recent years. In 2012, it was based beside a river which flooded during a heavy storm, killing six dogs and damaging the complex beyond repair. As a result of this tragic flood, the team moved to their current location in Obrajes, which while adequate for now, lacks the open space that the dogs require.

But Major Laguna remains optimistic. 'This year the centre is celebrating its 50th birthday, and the local government has promised us a new complex near the Pura Pura forest, where we will have much more space for our training.' As the boisterous Rocky races around the obstacle course, in a caramel blur of fur and paws, I can't help but think this will be a much-deserved upgrade.