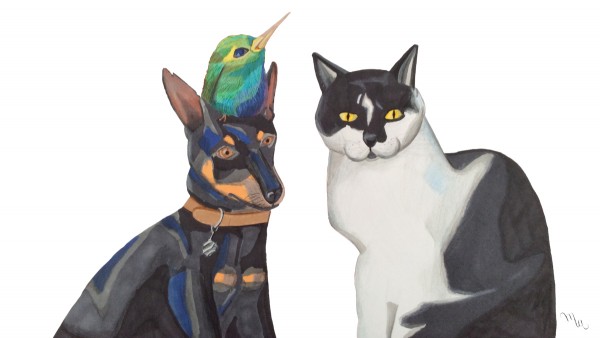 Kandinsky the cat was the first of them all. He lived in the BX penthouse on the 19th floor, warming the hearts of the interns who passed by. His death was unexpected. It seems the interns left a window open at night, and Kandinsky decided to cross it and travel all the way down to the ground floor.

Bruce Wayne arrived next and, since being a single mum is often challenging, I tend to bring him to the BX office. The BX team loves Bruce and his fashionable outfits. He was accepted at the house until he started to misbehave in unusual ways, including rolling on his back in his own excrement and eating 4 kg. of raw chicken skin.

Last but not least is Chappie Steve, a lovely hummingbird who shares his colors, magic and unwavering willpower with the world around him. We adopted him 3 weeks ago. Since he was becoming weak, I had to be creative about replacing his protein diet, which is why I placed earthworms in my blender without hesitation. Thankfully this formula is working and Chappie Steve is getting closer to the day in which he can fly.