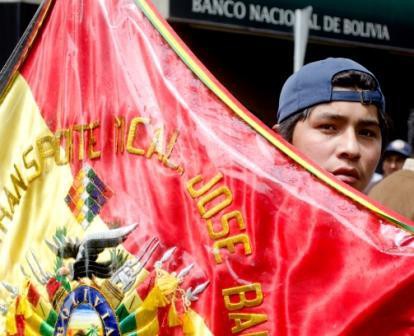 Minibus Drivers Are Furious About the Puma Katari Buses...
But No One Else Seems to Mind

On January 20, minibus drivers marched across La Paz and gathered in the Plaza Mayor to protest against the rollout of the new Puma Katari buses. These 61 buses, which will run from the outskirts of the city towards the center, are part of the mayor’s plan to modernise transportation in La Paz, with service scheduled to begin in November. Built by the Chinese firm King Long and with a larger carrying capacity and clearly defined stops, the Puma Katari buses will provide a more efficient and reliable alternative to the current system of minibuses that most paceños use to get around.

The choferes fear that their dominance of the city’s transportation system will come to an end, and although the official position is that the buses will not be replacing existing minibus routes, the drivers have gathered around this issue as a rallying point for other grievances. They blame the Mayor for implementing a requirement to purchase new vans and raising taxes—a ‘lack of respect’ which has them incensed.

Paceños who want an improved bus system criticize the drivers for continuing to promote the obsolete minibus system and delaying the implementation of the Puma Kataris. The drivers, though, feel that the citizens are ungrateful for the service they provide.

As I walked with the bus drivers during the protest, I noticed that not a single non-bus driver had joined them; in fact, it was just the opposite. Stall owners, as well as people walking by, stopped to shout insults at the marching bus drivers, who returned fire, verbally and sometimes physically. Along the Avenida Camacho, we passed a market that had had its glass front door broken by a rock. According to the furious shopkeepers, it was some of the marching drivers, who had gone so far as to call them putas del alcalde (the mayor’s whores). ‘What is a good citizen supposed to do? We don’t want to be involved in the issues between the mayor and the choferes. We support the Puma Katari, but this fight has nothing to do with us’, one shopkeeper told me.

Not only do the choferes face a mayor that seems to undervalue them, and a public that certainly does, but they are split among multiple unions, among which communication is rare and interests not always aligned. This serves to further confuse the message of an already misunderstood group of men fighting for their jobs. I spoke to four different drivers who had appeared at the protest to find out what their position was.

What is your opinion on the Puma Kataris?
We are not against them. [The mayor’s office] made a deal with all of the leaders of the minibus unions, signed and all. They signed a deal saying that main avenues would not be used to transport the Puma Katari, but that is not happening. Also, we need the the Mayor’s respect . . . And we also demand a raise in the fares, because a tire that used to cost 300 bolivianos now costs 800. And the cost of maintenance has risen a lot as well. Those are our reasons—we are not against the whole Puma Katari system.

If you were given the opportunity to drive a Puma Katari bus, would you accept?
No. Because we have an condition that we cannot go and offer ourselves. If we did, we would be thrown out of our syndicate. But there have been some that have gone. And we would not be accepted, either. They would see in their computer that we were part of a minibus union, and would not accept us.

If you did not have your job as a driver, what would you do instead?
There are not many other jobs open to us. I mean, if they get rid of this source of work, the result will be unemployment for us all.

We want progress for the city of La Paz, as citizens and as transport workers. We support the teleférico and the new buses. But we ask at the same time that they work with us, that they do not disparage us. People do not take us into account. What is urban transport? They do not know.

How many years have you worked as a bus driver?
I have driven for 30 years. Since my youth. And the majority of those here started as kids, and we are growing old driving the buses. Why? Because we have families, we have kids, wives, everything. We are just ordinary people.

(His friend interrupts):
One thing is, they say that these Puma Kataris are worth hundreds and hundreds of thousands. That’s a lie. That’s Chinese money. They are worth ninety thousand, nothing more. And they are robbing it right from our wallets. Where does the money go? Half of it goes right into their pockets. And what are we supposed to do, let it happen? No. Bad investment. This transport that has come, it’s all a waste. It’s a hole that will never be filled. It’s not stable. That’s why we are mad.

The Puma Katari buses are robbing us of our livelihoods. Far from bringing modernity to the city, they are actually more like a step backwards. This is because they need diesel to run. Additionally, the mayor has not given any alternatives that will not harm our daily sustenance. People are just captivated with the new look of the buses, but in reality they are not good for the city and are not worth the high price the mayor has paid for them.

Do you own your own bus?
Actually, I just got one recently.

How did you become a driver?
I was with friends. I started off driving someone else’s bus and here I am.

What is your opinion regarding this whole problem that is happening with the Puma Katari buses?
I do not think that the Puma Kataris are a problem for us. On the contrary, we are supporting them, because we want them to happen, to modernize a bit. What we are asking for is a raising of the fares, to match the taxes we pay, which are far too high. Not to mention that the mayor has required us to buy new vans. We made the change, but the tax is 5,000 or 6,000 bolivianos a year, which is a lot. These are things that do not have to do with the Puma Katari. We are protesting over other things. For example, the Mayor has required that we cannot do trameaje [dividing up designated full routes between buses to make more money]. But the Puma Kataris are going to do trameaje because they will only travel to the city center. The law is for everyone, not just for us. The Puma Kataris should serve to bring people from point to point, not just to the center. That’s what we want.

And if you lost your job as a minibus driver, what would you pursue as a career?
I think I would become a mechanic. I have a degree.

Did everyone here come of their own will, or was there some group or union that forced them to come?
In previous years, the workers were always obligated to come, but that actually did not happen this time. We made it up to the average workers what we should do. The Federation and the Central [two La Paz transport workers unions] went and consulted with the workers as to what we should do. And it is the workers themselves who decided we should have this march. So no one has forced them.