The Bolivian Cult of K-Pop 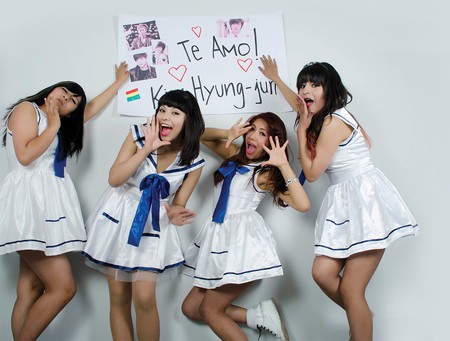 Mention K-Pop to a non-obsessive and their knowledge of the genre will most likely extend to Park Jae-sang’s Gangnam Style and, if you’re lucky, its sequel Gentlemen — think Alvin And The Chipmunks: The Squeakquel levels of disappointment. Say the name PSY to a real K-Pop fan, though, and they will laugh you off. Samantha Alejandra, a die- hard supporter of the genre, says his only redeeming quality has been ‘displacing Bieber for the most views on YouTube’. In Bolivia, however, for reasons that Alex Walker will curmudgeonly attempt to explain, K-Pop has become something of a religion.

In January this year, Kim Hyung-jun, former member of the appealingly named SS501 and Korea’s answer to Justin Bieber, became the first K-Pop star to perform in Bolivia. Promoting his solo album Sorry I’m Sorry –presumably a pre- emptive apology for the tuneless vocals that await– a YouTube video shows Kim being met by pandemonium at the airport. One fan, Maria Henecia U, perhaps under the deluded impression that Kim reads comments on cult videos of him, professed that ‘to touch your hand was the best thing that happened to me this year!!! I love you’.

The tour was a demonstration of just how popular K-Pop in Bolivia has become, causing traffic build-up on the roads and requiring a police presence to maintain order; some fans were even seen pitching their tents outside the concert venue several days prior to his performance. It is a genre that has yet to permeate Western culture, however, despite having strong Western flavours: notably, hip-hop verses, euro-pop choruses, rapping, and dubstep breaks; not to mention superficial heartbreak. The latter is no more obvious than in a video of a live performance of SS501’s Because I’m Stupid where Kim Hyung-Jun can be seen silently ‘weeping’ mid-song — presumably reminiscing on some past personal trauma or just peeved about his apparent stupidity. K-Pop is a genre, however, that far transcends the music. It is a cult.
K-Popping