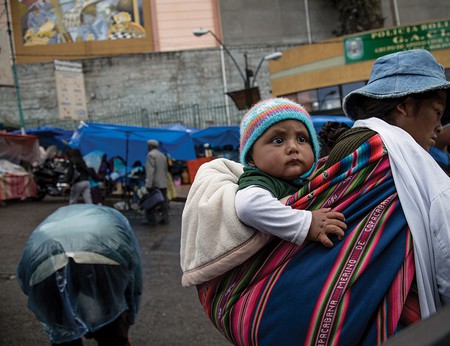 Raising a Baby in El Alto

Doña Basilia rushes out of the store where I stopped to buy eggs, wrestles my baby from me, and wraps him tightly in a blue fleece blanket featuring a pitchfork-wielding bear. She tells me I can keep the blanket if I promise never to bring my baby outside like that again.

We are in a community on the outskirts of El Alto, that sprawling city that looks down onto adjacent La Paz from high up on the windswept altiplano. Once just a makeshift satellite suburb of Bolivia’s capital, El Alto has grown at a reckless pace since the 1950s, as migrants from rural areas arrived in search of a better life. Now a city in its own right, it has exceeded La Paz in population and is said to be the largest predominantly indigenous city in Latin America. This is where I live with my husband and his extended family, the newest member of which is our four-month-old son.

In El Alto, there is a strict set of rules governing the raising of babies. These include but are not limited to: always wrapping your baby as tightly and in as many blankets as possible (due in part to the icy altiplano weather, but also to avoid incorrect development of the hips or spine); making sure your baby always wears a hat, lest cold enter through the top of his skull; never carrying your baby in a vertical position, as this will cause her cheeks to sag; sleeping with your baby so that neither mother nor baby need get out of bed to breastfeed in the cold.

Those who choose to disregard these rules must be prepared to answer to the Blanket Police.

In effect, everyone is a member of the Blanket Police, since everybody subscribes to the rules and is aware of their duty to confront and discipline rule breakers. This is because, in El Alto, babies and children are collectively owned. Everyone has a stake in the upbringing of the child, from your mother-in-law and the woman at the corner store to a stranger on the bus.

‘No me lo vas a manejar así’, instructs the woman at the vegetable stall. It is the ‘me’ that is indicative. ‘Don't carry him like that for me’. (‘I'm sorry, I didn’t realize it was your baby I was carrying. If I had known, I would have asked you first how you wanted him carried’, says my indignant inner self.)

It is perhaps typical of a small community, which is what El Alto neighborhoods effectively are, that your business is everyone’s business, and by extension, your baby is everyone’s baby. The advantages, of course, are that a collective eye is being kept on children, and any perceived abuse will be made public, while for new mothers who don’t yet know a baby’s head from his bottom, there is always someone there to tell them. The downside is that your capacity to choose how to raise your child is limited.

At the beginning of my pregnancy, I signed up to an online forum of Australian mothers-to-be, wanting to know how they did things ‘back home’. There, the buzzword is ‘choice’. You can disregard SIDS recommendations if they don’t work for you, you can restrict in-law visitation hours, you can suspend all housework activities until your child turns three; it is your choice. In El Alto, your doctor tells you what to do, providing information only on a need-to-know basis. Your mother-in-law or Doña Basilia at the corner store issues you with commands that you, as the ingenuous new mother, must follow.

A large part of this has to do with information flows. New mothers in Australia overdose on a million conflicting sources of information found on the Internet; devour books on parenting; weigh up advice from mothers, friends and doctors; and then choose for themselves. In El Alto, information sources are limited to your doctor, your mother, your mother-in-law, and the Blanket Police, all saying essentially the same thing. The effect, in Australia, is an expectation that we can control and manipulate every aspect of raising a child to suit our personal belief system/lifestyle/timetable/horoscope. In El Alto, you just suck it up and get on with it.

I like to refer to the online forum mums as the ‘Oh Hunners’. If you’ve had a tiring day, only managed to put one load of washing on, or are not receiving enough support from your partner, you simply post a rant, and within minutes you will receive several responses all beginning with, ‘Oh hun, you’re doing great, you’re a great mum.’ Mothers in El Alto have a different set of expectations. There is likely to be no washing machine for that one load, no dishwasher, blender, car, cot, Jolly Jumper, sense-stimulating toys, mothers’ groups, postnatal depression support groups, and certainly no nappy-washing partners. No one gives up their place in a bus queue for a pregnant woman in El Alto. Women become mothers; it’s just what they do.

I would like to carry my son in an aguayo like the cholitas, but unable to shake that thirst for information and control, I consulted a fancy traumatologist down in La Paz, who ruled that a carrier on the front was better for a baby’s hips. And so, when we hit the streets, it’s like the circus is in town. People stare and whisper, “Did you see that baby?!” Cholitas ask to borrow him, and they pass him around.

The Blanket Police are used to us now. They’ve become resigned to our diviations. But I always carry a blanket when I leave the house. Just in case.