The Beaches of Santa Cruz 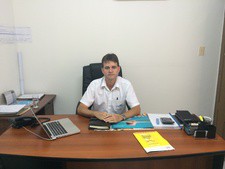 ‘In five years, there will be a city there,’ Francisco Cibrián tells me from behind his desk, his eyes glassy with a mix of admiration and exhaustion.‘Right now, it’s difficult to imagine because there’s not much of a road to get there. But the climate is cool and the landscape is beautiful. It’s perfect’, says Cibrián, who is an athletic, young-looking man with a mullet.

Francisco Cibrián is the general manager of the Puerto Esmeralda project, a $40 million housing development that will soon rise on 200 hectares of virgin soil in Urubó, right across the Rio Pirai from where we sit in his office in Equipetrol, Santa Cruz.

Puerto Esmeralda is no port at all. It is one of three new developments in Urubó that will include a man-made lagoon (otherwise referred to as ‘the sea’), along with a stretch of sand around it (read: ‘beach’). It is an ambitious idea, one that has been executed with success in neighboring countries like Chile and Argentina, as well as across the world. The hope is that projects like these will put the city of Santa Cruz on the map as a holiday spot on an international level. Cibrián tells me the project’s land has already been sold to people in the United States and Switzerland, who plan to use their property in Puerto Esmeralda as a second home, or a ‘beach house’.

The idea of living by the ocean isn’t only being marketed toward wealthy foreigners. As the country goes through one of its best economic moments in its 189-year history, many Bolivians are coming to new riches. The members of these rising classes are eager to show what they have. One outlet is real estate. The rapid growth of the newly rich —not just in Santa Cruz but in Cochabamba and La Paz as well— is the reason expensive developments seem like a good idea, especially if they can deliver the ultimate prize: the ocean. 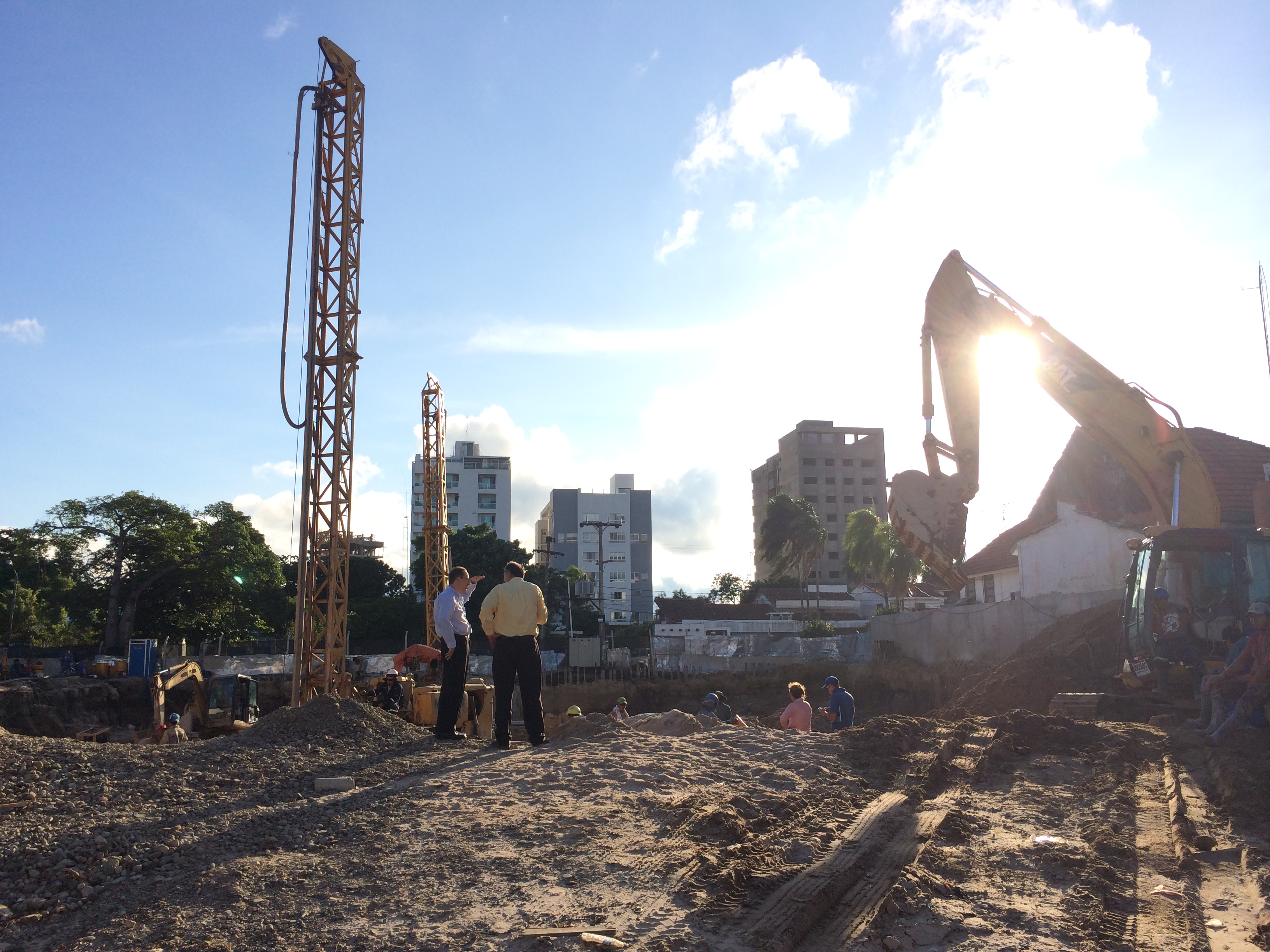 ‘The housing boom here in Santa Cruz has been going on for five years’, Cibrián told me. ‘It’s been happening for so long that people are thinking, “It’s going to burst, it’s going to burst. It can’t be that expensive”. But prices keep rising. And the reality is that there is a demand.’

‘People in La Paz and Cochabamba want to have beach houses. And they can get in their cars and have a vacation right here’, he continued.

Unlike its competitors, the Puerto Esmeralda project is proudly local. All the investment comes from Bolivia. The owner, Pedro Antonio Gutierrez, is a cruceño and one of the most powerful men in the city.

When I visited their office, I was struck by its lack of distinction. Like the rest of the neighborhood, it was located in a low, whitewashed building with abundant plantings of palm trees and other tropical plants in the yard. Inside, it was sparse, with the exception of framed advertisements, showing caucasian families laughing on the beach or sailing in Caribbean-clear water. I couldn’t help but think I had seen the same pictures in advertisements for Club Med in the Bahamas. 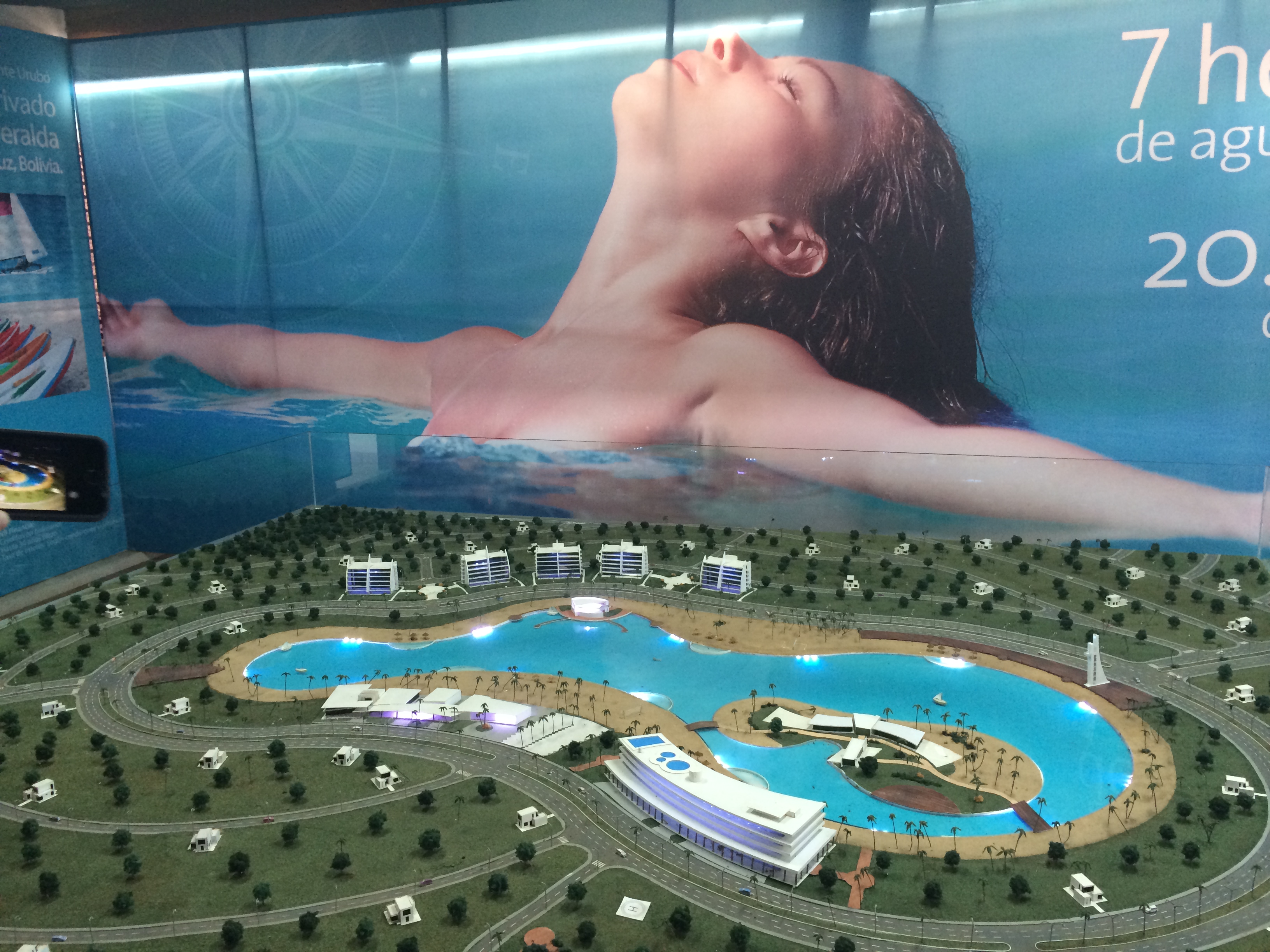 Outside his office, Cibrián showed me a scale model of what Puerto Esmeralda will look like when it is completed in 2016. ‘I have heard of people going on trips to places like Punta Cana for their weddings’, he said. ‘But here we have our own island...I’m not saying it will be like Punta Cana, because the ocean is the ocean. But the option is there’.

The option is there indeed, and developers are betting that rich Bolivians will take it instead of travelling abroad to go to the beach, or investing in a second home in another country. So far, it seems that they have placed their bets correctly. The culture of consumption in Santa Cruz is vigorous: fancy clothes, fancy cars, fancy houses. As the Puerto Esmeralda saleswoman in La Paz described their target clientele: ‘There they care about their looks, about being tan, about their bodies’, she said, as she outlined an hourglass figure in the air in front of me.

Santa Cruz is the most populous department in Bolivia, inhabited by over three million people. And the city is growing—fast. Last year, Santa Cruz was by far the largest consumer of cement in Bolivia, accounting for 32% of all the cement used in the country, a testament to the construction boom it is undergoing. The city is expanding outwards in all directions from the casco viejo, which is run down by comparison. Anillos are continuously added to the city’s system of concentric highways. In outer areas of the city, a block can contain as many as three construction sites for condominiums or apartments.

I came to Santa Cruz to see this massive increase in construction for myself. According to the construction council of Santa Cruz, $500 million were invested in new construction projects in the city in 2013. No one I talked to seemed able to explain where the money or the interest was coming from. I heard rumors that Bolivians who got rich off of the country's drug trade were deciding to invest in construction projects to launder their money. But this is development in name only. Some new buildings do not even have sidewalks in front of them, as if they are for show, to be admired and then passed by. 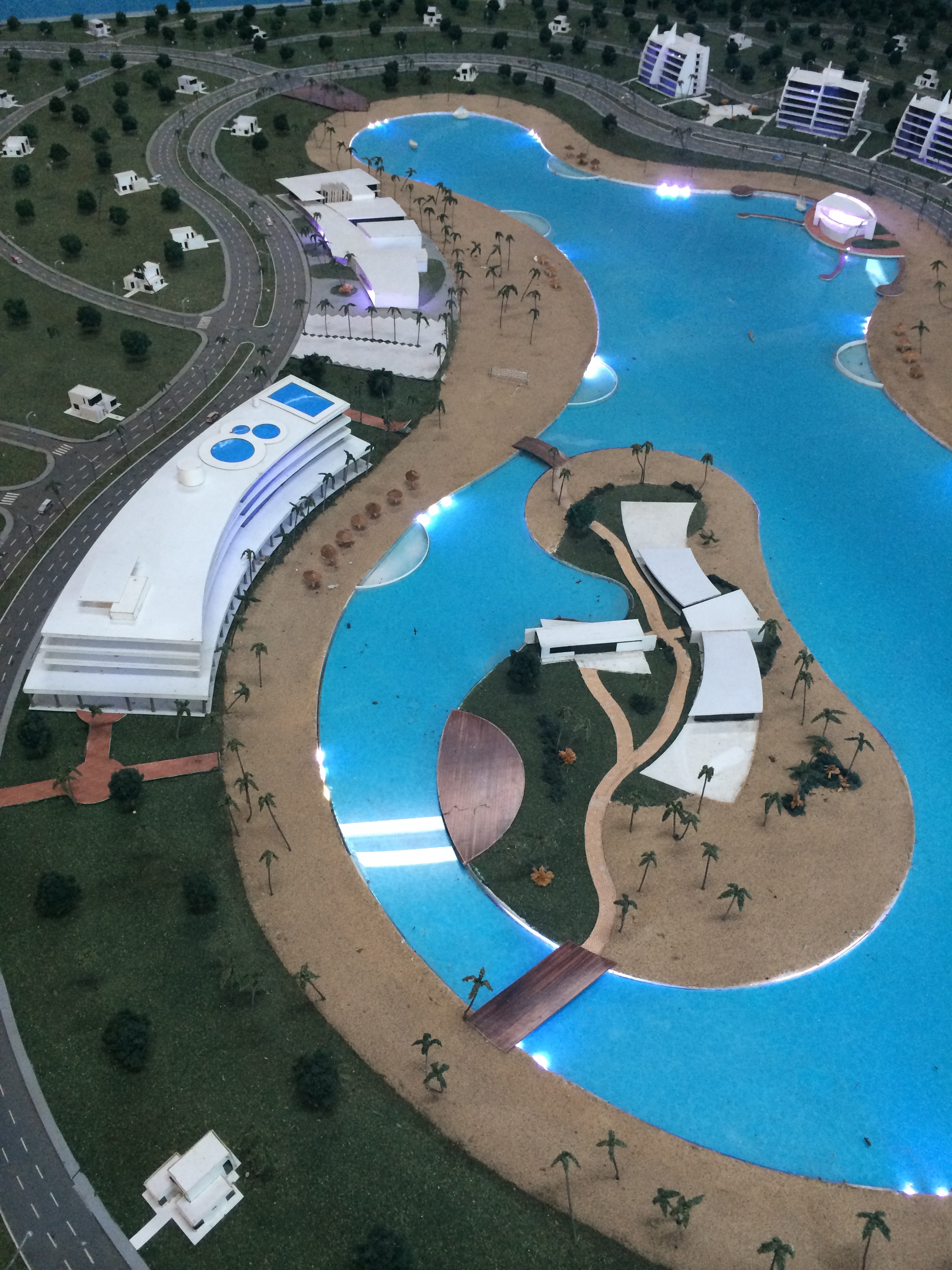 In equal measure to active projects that lined the avenues —with billboards projecting what the buildings will look like and imploring passersby to start buying— I saw many half-completed, abandoned husks of concrete in Santa Cruz, looming above their younger brothers, netting waving in the wind as a warning of what was to come.

The utopic Urubó is not immune to these problems. I visited a house in Urubó Green, a gated community, that had been under construction for three years. There was no sign that any workers had been there recently. The half-formed garage was flooded from the past week’s rain, and broken bricks lined the floors. It was a shell, nothing but walls and piping. No one knew when it would be finished. ‘These people are so rich, they keep changing their minds about what they want the house to look like, and the builders have to re-do it’, I was told. The perfect house seemed to exist only in theory.

When I arrived in Santa Cruz, I was surprised to discover that Puerto Esmeralda was not the only project centered around a an illusory ocean. Two more, Playa Turquesa and Mar Adentro, were announced at around the same time. All three feature apartments on the ‘beach’, as well as lots that go down in price as they move away from the waterfront.

Not much distinguishes one project from the other, despite what their marketers say. Playa Turquesa, which will enclose the largest lagoon out of the three (at 12 hectares, or 120,000 square metres), and Mar Adentro —the smallest— are being built by the same company, Crystal Lagoons. Crystal Lagoons is a Chilean contractor responsible for 160 similar projects worldwide. They are notable for having built the lagoon at San Alfonso del Mar in Chile, which for a time held the world record for the largest in the world. The company is currently working on a $7 billion lagoon development in Dubai that will set the new record at 40 hectares. It is due to be completed by 2020. Until another project of this magnitude comes along, Playa Turquesa will lay claim to be the second largest. 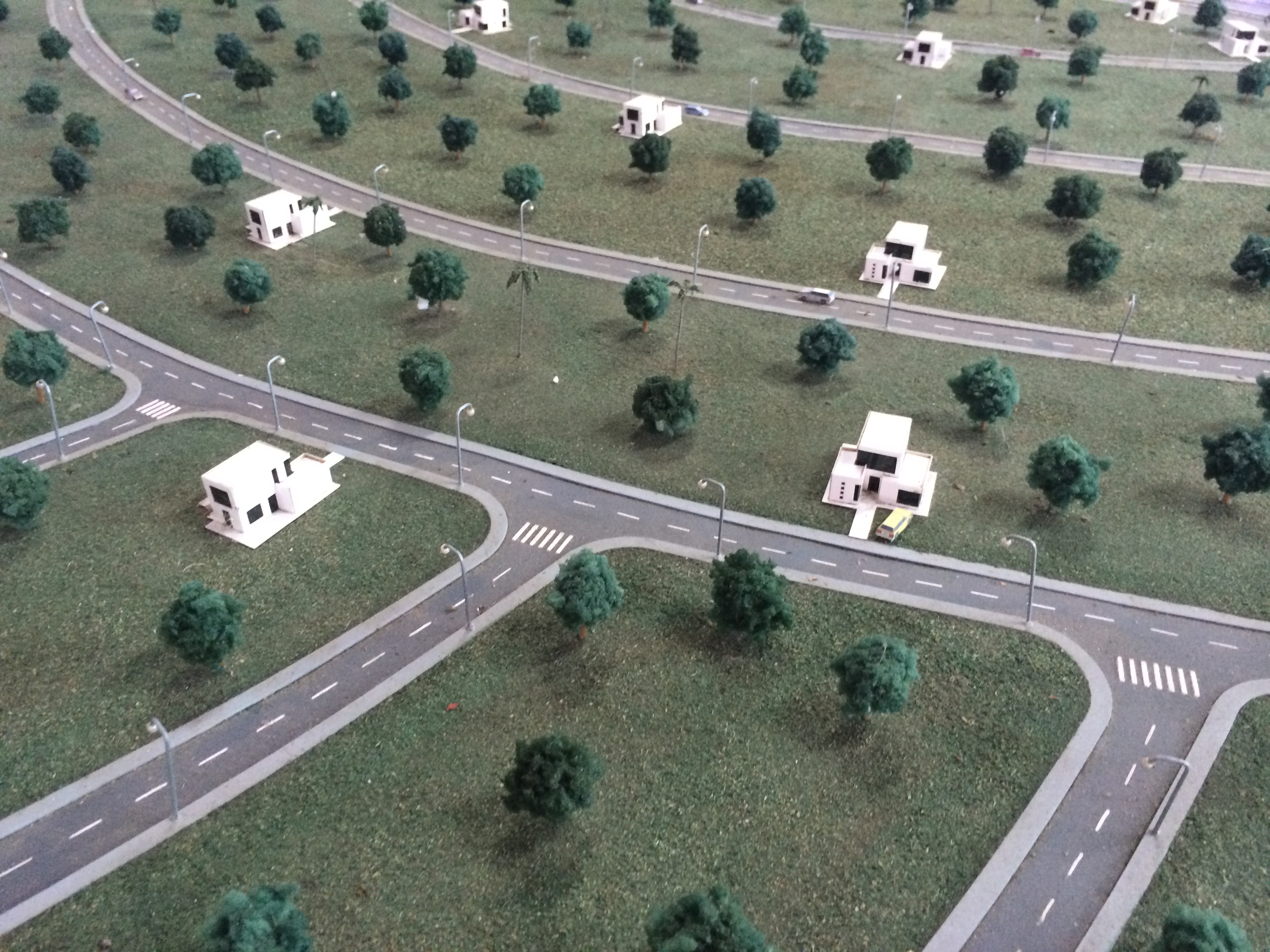 The three projects, of course, step on each other’s toes somewhat. Although two are owned by the same company (as suggested by their brochures which feature the same model in identical goggles, flippers and bathing suit), there is still friendly competition. “We usually don’t like to talk about the others”, Cibrián told me.

The biggest irony is, perhaps, that the Bolivian ‘beach’ experience will be provided by a company from Chile, the country responsible for annexing Bolivia’s coastline following the War of the Pacific in 1879. According to the World Resources Institute, Chile is number five on the list of countries with the longest coastline, whereas Bolivia is (tied for) last with 0 Km of coastline. Bolivians still hold a grudge against their neighbor to the west for this aggression that has left them without a beach or access to the ocean. It has long existed in the realm of fantasy for many Bolivians to have a beach of their own. As it reads on the Crystal Lagoons website, they ‘can transform any destination into an idyllic beach paradise’. That is what they are doing in Santa Cruz.

I became interested in the Puerto Esmeralda project for this reason. Announced in September of 2013, it will be built further to the northwest than most of the development so far executed in Urubó. The plan is to sell 1,400 lots that vary in size as well as distance from the central lagoon, which will have a surface area of about 7 hectares. For those who are willing to spend even more, apartments are available in a dozen buildings directly overlooking the water, which includes a scuba diving area, man-made island, restaurant boardwalk and, of course, 20,000 square meters of ‘beach’.

The cheapest lots in Puerto Esmeralda start around $30,000, and apartments start at $60,000. ‘Nowadays 30,000 dollars, many people can afford. There really isn't any land that’s cheaper than what we are selling. They have raised prices here, but it seems that there are people who are still paying, no?’ Cibrián told me.

Pre-sales for Puerto Esmeralda started in October of last year, and about 30% of the lots are already sold. This, in a country where the average income is about $7,000 a year, and a city where 72% of families cannot afford a place to live. With these figures in mind, it was hard to understand who was buying.

With newfound riches, the people of Santa Cruz are constructing a fantasy world in Urubó. Here, Bolivia is not poor, but rich. And it has an ocean. Even the developers responsible seem to be a part of this fantasy. ‘We can’t speak about class anymore in Santa Cruz. Everyone has money’, insists Claudio de La Rosa, Head of Marketing for Playa Turquesa. 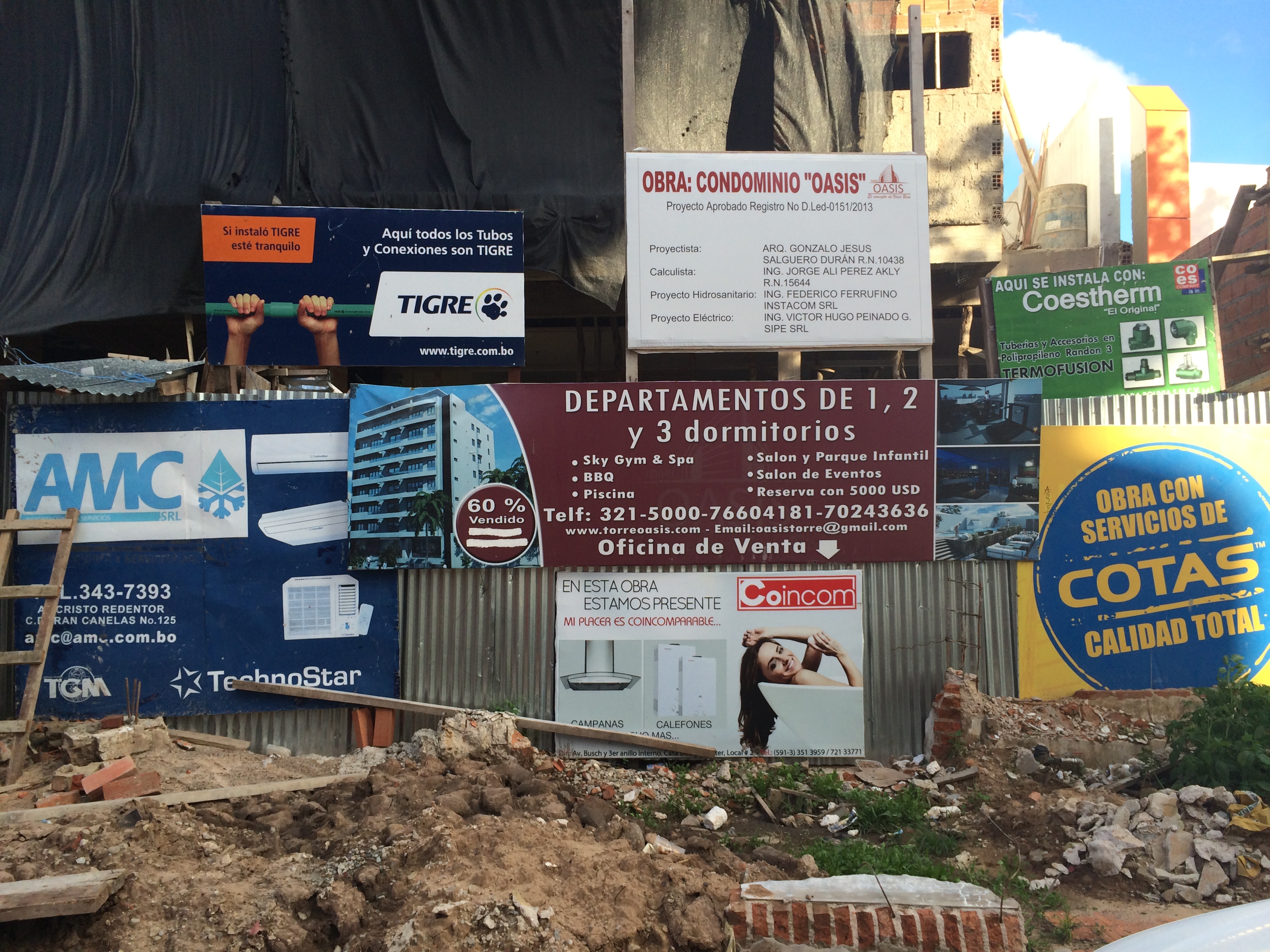 The problem is that at present this world only exists in their collective imagination. None of the three developments has yet to start construction. Nothing is there yet, not even a sign. The 14 Km road to Puerto Esmeralda from the Urubó bridge has yet to be built. Even if it were built, though, the road would lead to nothing but grass. Yet 30% of it has already been sold. As has 70% of Playa Turquesa.

Can Bolivia’s small upper middle class sustain development on such a large scale? Are there enough of them to buy up the whole beach?

Francisco Cibrián thinks so, or at least he hopes. Money from pre-sales is necessary for the project to begin at all. And the hope is that Urubó will keep growing, until Puerto Esmeralda no longer seems far away from the city. There are plans to locate a hospital, a hotel, a school, nearby. ‘It will be its own city, its own island. Sort of like Manhattan.’ This is the dream of the newly rich in Santa Cruz: to create a new world, closed off to anyone who cannot afford it.