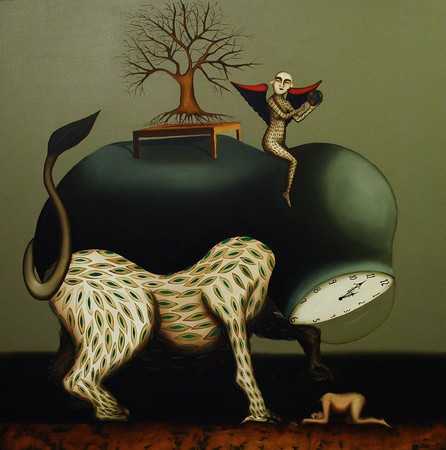 A first encounter with the work of Marcelo Suaznabar is equally fantastical and unsettling. At first, there is a visual delight in the surreal chaos of the image, as in El Macabro Paso del Tiempo, where angels playing instruments cavort with mermaids and naked women. However, the dark side of the carnival soon emerges from the vibrant scene. The clock, the focal point of the piece, reads: ‘el tiempo se acabo y ya nada podemos hacer’ (time’s up and there’s nothing you can do). An angel and a beast cling to the edge of the Earth, suspended above the unknown. We are, in fact, spectators of the Apocalypse, in which ‘The Lord will be revealed from Heaven with His mighty angels in flaming fire, dealing out retribution’ (Thessalonians 1:7-10)

Marcelo’s work consistently employs the traditional imagery of the apocalypse, drawing on the visual plenitude of both the Northern Renaissance and the barroco Andino which captivated him as a child in the churches of Potosi and Oruro, influences which are rejuvenated by a clear interested in the Surrealist movement of the early 20th century. However, this is not a purely aesthetic choice, or a mystical indulgence. The artist is always concerned to transpose this traditional imagery of damnation to shock people into an acknowledgement of the imminent collapse of a world devastated by industrialization and global warming, a state he describes as ‘condenación moderna’, or modern damnation. ‘We should think of our modern damnation as a mirror, which allows us to realize the general disorder of our endangered planet.’ Suaznabar’s apocalypse is purposive and didactic: ‘If we create a global collective consciousness… we could extend the existence of the world for future generations’

Empowered with this greater understanding of Marcelo’s agenda, the juxtaposition of Apocalypse and modernity appears everywhere in his paintings. Barcodes replace mouths. The centrepiece of Alegoria is hemmed in by vignettes showing factories, melting ice caps, and deforestation.

It is clear then that Marcelo’s work is moral, and allegorical. But the relationship of Surrealism and pragmatic politics has always been fraught and complex. This relationship is the subject of Andre Breton’s ‘What is Surrealism?’, which describes ‘A certain immediate ambiguity contained in the word surrealism... which, on the contrary, expresses a desire to deepen the foundations of the real, to bring about an even clearer and at the same time ever more passionate consciousness of the world perceived by the senses.’ Breton also claimed that the perfect Surrealist act would be to walk into a crowd and start shooting.

Marcelo himself alludes to the paradox of evoking the dream to deepen our understanding of an urgent political reality: ‘Personally, I am sceptical about politics. But what interests me is surrealism’s transmission of images of situations of discord, elevated to the dream-state, can generate a political discourse of protest.’ Marcelo and Breton both synthesize elements of the dream and elements of realism to force us to meditate deeply on our own reality and change the way in which we perceive it. However, while many early 20th century Surrealists jubilantly celebrated the end of civilization, for Suaznabar, in the 21st century, the real prospect of the end of civilization is much more distressing.