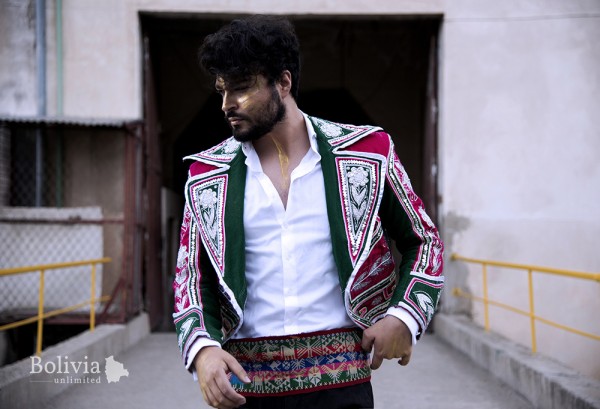 Transgressing the boundaries of performance in Bolivia

Andoro is no musician alone. This was made clear the moment he stepped through the front door of the coffee shop and greeted me. Andean poncho, duffle coat and denim shirt in toe, it was also clear that Andoro takes his fashion seriously. Whilst he released a five-track album this year, entitled Inmortal, his exploits haven’t been grounded in music alone. Andoro uses his concerts to explore other mediums as well, such as visuals and fashion. He is an artist that thrives on the multifaceted nature of art, choosing both his love of fashion and music and never settling for one.

Yet there was no start for Andoro. For as long as he can remember he has always been interested in music, as if it were intrinsic to his being. ‘My mother used to tell me that when I was a baby I would react to music,’ Andoro explains, ‘It was in my DNA. My whole world was built by sound and music. Every Christmas I’d ask for something that would make noise.’ Andoro, a name he chose for himself, learned to play the harmonica before he could even pipe a word. His big break wouldn’t materialise until he deviated from his studies in social communication and pursued his passion. Surrounding himself with like-minded artists, such as Vero Pérez from the jazz-pop band Efecto Mandarina, he eventually gained the confidence to take the stage.

Inspiration and support from artists, friends and partners in the artistic world helped form Andoro as we know him today. His friendship with Joaquin Sánchez (an internationally renowned visual artist) was vital in his experimentation with live visuals for performances. Sánchez allegedly gave him the piece of advice by which he seems to live by today. ‘I told him I wanted to try to make it into the music business,’ Andoro remembers, ‘but that if it didn’t work out I would try fashion instead. Then he told me: “You don’t have to choose.”

Whilst he released a five-track album this year, entitled Inmortal, his exploits haven’t been grounded in music alone.

His willingness to break the boundaries between the arts has bled through in his music. He says himself that his album is ‘pop and electronic with experimental elements.’ Incorporating further Andean influences, he states: ‘From the preparation of meals to the offerings you make to Pachamama, everything is ritualistic in Bolivia. I want that to reflect in my music, which is why my songs sound like rituals.’ Inmortal provides a soundtrack that Andoro feels is like a musical journey. Its diversity, from intense ritualistic spoken word to the warm soft comforts of his duets with Vero Pérez, is a key strength of his album and is metaphorical of the project itself.

As a result, his live performances are spectacles in which he uses what he has learnt from various artists. When I ask him about his concerts, he simply replies: ‘They aren’t concerts, they are more of an experience.’ This is plain to see in the elements that factor into his performances, as Andoro tries to overwhelm the senses, making his shows truly unique.

‘They aren’t concerts, they are more of an experience.’

‘We have a lot of point of views working on one project,’ Andoro says. ‘It is a collaborative community of artists, sculptors, photographers and cinematographers. This is the strength of our endeavour.’ For Andoro, this is only the beginning. In the future he hopes to host various pop-up events, using spaces such as cinemas for visual events, and hopes to get out on the streets more. ‘My music is inside a bubble now,’ he says, ‘this is good because it’s safe in the bubble and there aren’t many people punching at it, but I want my music out on the streets.’

Surely enough, Andoro is only emerging as an artist. If this bubble of protection eventually pops, then the people of Bolivia will hopefully come to celebrate the diversity of his project, which is a fitting match for the times Bolivia lives in today.