The Andes’ Own Hard Rock Cafe 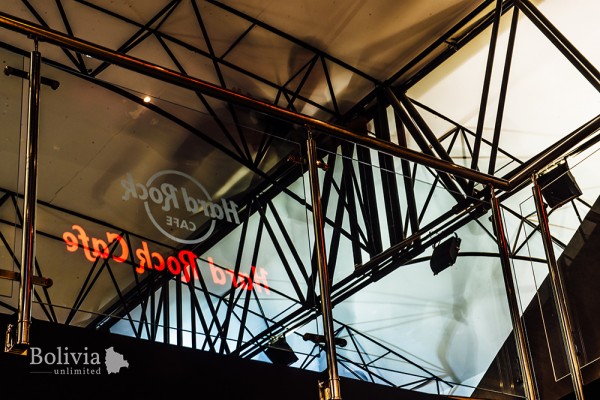 ‘The museum for people who don’t like museums’ is how general manager Rafael Pérez describes the global Hard Rock Cafe chain. The Hard Rock is one of the few international brands that has the ability to change people's travel plans and incite a certain loyalty.

La Paz’s own chain is no different, having recently hosted the 320th and 280th visit of two intrepid Hard Rockers. ‘It’s an important part of tourism in La Paz,’ says Pérez, and numbers are expected to rise for this kind of visitor as the La Paz location remains fairly new. It will celebrate its first anniversary on 21 September 2018.

La Paz is a city with a strong rock ’n’ roll culture. In fact, the ‘Hard Rock’ name has already been used here before, albeit entirely unofficially by a bar formerly in the city centre. So why did it take so long for La Paz to have its own official offshoot of the brand? ‘The Hard Rock franchise is committed to finding local owners and investors…people who know the place and are Bolivians, not Americans or Europeans,’ Pérez says.

It’s not just a matter of money when it comes to obtaining a Hard Rock license and opening a cafe; the corporation undertakes market research and chooses the location. The Hard Rock Cafe in La Paz is found inside the MegaCenter mall in Zona Sur, a locale more accommodating toward a 89 bolivianos (US$13) burger; however, its location does mean tourists, who usually congregate in the city’s centre, ‘have to look for us,’ says Pérez. ‘It can be a good reason, though, for people to come down here [to Zona Sur] and discover another part of La Paz.’

But no matter where they are in the world, Hard Rock Cafes have 80 to 90 percent of their menus in common. The La Paz branch has its own local variations, such as a singani cocktail and a Bolivian-inspired burger to be revealed on the bar-restaurant’s anniversary. When asked what ingredients this burger might include, the only hint given is that it will be ‘made with love.’

For tourists or expats hunting familiar fare or taking a day off from foreign flavours, the Hard Rock might be the cure for homesickness (or perhaps just physical sickness) here in La Paz – especially since there are no McDonald’s in the country.

Punters who do make their way to the city’s Hard Rock Cafe will find an impressive display of memorabilia, with a number of items from international stars as well as Bolivia’s own rock group Octavia.

‘It’s a point of pride that La Paz has a Hard Rock Cafe,’ Pérez says. Hard Rock Cafes are limited to one per city (Las Vegas and New York being among the exceptions). Bolivia now has two, the other in Santa Cruz, which opened in 2014.