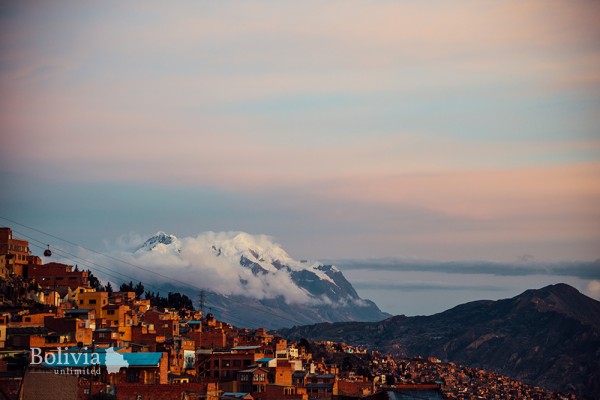 Parents and protectors of the Andean world

¡Tatituy! ¡Papituy! These are the words that the yatiri repeats, referring to the ancestral spirits and protective parents from the mountains. He graciously makes a blessing to bring good fortune in work, study and love. Ramón Quispe is an Aymara yatiri who believes in the protection and blessings of the mountain spirits called Achachilas.

The Achachilas are supernatural spirits of the Andean world and the protectors of Aymara communities. These spirits inherently exist or reside in the mountains and the snow-covered altiplano.

The city of La Paz is stunningly located, picturesquely positioned in a canyon surrounded by mountains in the western cordillera of the Andes, with the Cordillera Real lying to the northeast. There are three magnificent summits which stand out along the mountain belt: the snow-capped Illimani, Illampu and Huayna Potosí. These mountains are spirits with a mighty jurisdiction. According to Ludovico Bertonio, a Jesuit priest and linguist who was a pioneer in the study of the Aymara language, the Achachilas are grandparents, ancestors or the sage of the household.

One of the most important Achachilas is Illimani, a snow-covered peak at 6,438 metres above sea level. The name derives from the Aymara word illa, which means ‘generator of plenty’, and mani, which comes from mamani, meaning ‘protector’. This was the name bestowed by the various ayllus, or Aymara communities, that once inhabited the vicinity of Chuquiago Marka – now the city of La Paz.

The Achachilas are of great importance, and the Aymara believe in a hierarchy of deities. However, all the spirits that form part of the Aymara belief system are worshipped through different rituals, such as the Challas festival in August and Carnaval, as well as the dinners or offerings that are made to Pachamama, and the Achachilas are similarly conjured for protection.

‘On 3 May in Puerto Acosta [a town near Lake Titicaca], there is a festival dedicated to the Auki Auki, who represent the Achachilas in human form; the Aukis embody the Achachilas so that they can share and partake in the community. Three or four people are chosen to personify the Achachilas, which allows them to celebrate and dance in the earthly world,’ Varinia Oroz, a curator at La Paz’s National Museum of Ethnography and Folklore, says. The Aukis make sexual gestures, indicating that they are fertilising the land to ensure a good harvest. These notions of fertilising the earth and the agricultural calendar are present in various community celebrations, whereby the gods are summoned and personified to protect and enrich the earth.

When walking along the traditional calle de las Brujas, or ‘Witches Street,’ in La Paz, you can find figuries in the form of elderly figures, men and women who embody the Achachilas. People place them in their houses for blessings and protection. Likewise, there are songs and dances of adoration for these figures.

As one of seven designated wonder cities of the world, La Paz is undoubtedly becoming an enigmatic and unique realm to explore.