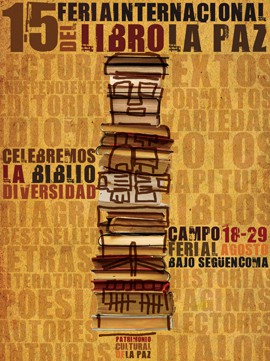 The Feria del Libro in La Paz reminds me of the Belgian book fairs I used to visit as a child. Although most of the books and stands are local and the feria itself relatively small, the book fair in La Paz has the same kind of atmosphere: people wandering from stand to stand, seeking out both tasty finds and old favourites, discovering new wonders and delving into personal interests. Also, many visitors are children, to whom this year a whole area has been dedicated: ‘la Feria del Libro Infantil y Juvenil’. This special area is divided into five zones where workshops, books and short movie presentations are to be sampled: myths and legends; fantasy, fiction and adventure; suspense and terror; comedy; and environmental and cultural diversity.

One of the aims of this year’s feria is to encourage literacy amongst children, so for the fifth consecutive year, children from el comedor Wisllita came to the fair with a collective piggy bank where they’d been saving money all year to each buy a book during the fair. Friday 27th August was the appointed day for the pig’s fateful slaughter: the children broke their bank and went to various stands where they were offered special prices for the books they wanted. This initiative promotes reading and teaches the children to economise.

But this year’s main theme is a proud ‘bibliodiversity’ which, as the president of the book fair Ernesto Martinez puts it, centres on “the possibility to access books written in Spanish, Aymara, English, Quechua, French, Guar- aní, books written by men, women, Bolivians or foreigners, industrially-produced or handcrafted books, books which approach various themes and interests, books for adults or kids... All kinds of books.”

This so-called ‘bibliodiversity’ is attributable both to the lexically abundant collection and the activi- ties at the fair, which this year include anything from workshops and conferences to book presentations and more political talks. Martinez’s perception of bibliodiversity also encompasses new technologies and the way they affect reading and the circulation of literature: although often deemed an impediment to reading, these are also a valuable part of bibliodiversity. Evidently many visitors concur; indeed, many multimedias were sold, including e-books - some of them being accompanied by a traditional book - virtual reads which are increasing in popularity since the printing costs for real books are much higher than producing multimedias such as audio CDs. But with the production of e-books in Bolivia come some hefty obstacles: along with Chile, Bolivia is one of the few countries in South America where books are taxed on purchase, and huge charter fees have to be paid to import books. In spite of such impediments, this year’s fair has been a great success, and the increasing number of visitors proves that higher prices and new technologies do not stop people from reading: the 2010 fair was graced by 77000 visitors, 7000 (11%) more than last year. “I strongly believe that we’ve fulfilled the two main goals we’d assigned ourselves as regards the International Book Fair in La Paz,” says Ernesto Martinez at the feria’s end: “to celebrate the fact that in Bolivia, we can access an enormous range of books and gain new readers.”

*This message was stuck onto the children’s piggy bank.