TED Ideas worth sharing, from Bolivia to the world 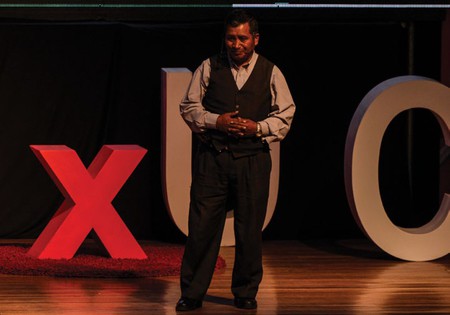 What does Steve Jobs, the founder of the world’s most valuable company, have in common with Walter Melendrez, a bolivian artisan who exports miniature clay figurines? Christian Rojas, organiser of Bolivia’s latest and largest TEDx event to date, explains what it takes to connect people through ideas.

It is 2 a.m., the temperature is 1° C but the thermal sensation is, I believe, -5° C. I am located in the Coliseum of the Universidad Católica Boliviana, which feels like it’s a freezer. The effects of fatigue have long since set in; I started working at 9 a.m. and have been concentrating on every detail of the next-day’s event. By that time I realized it was already Wednesday, July 31st, a very important day for us, the organizers, the university, and the city of La Paz. We were hours away from Bolivia’s latest and largest TEDx event.

A year and a half ago, I was feeling the same chills I did that night at the coliseum. Back then, I was walking around the University of Chicago in the middle of winter. A friend of mine, Güimar Vaca (who gave a talk at the latest TEDx UCB event, not that either of us imagined this back then), was showing me around the campus where he lived and studied for four years. He told me how he was organizing a TEDx event at the university. At the time, I was kind of a 'fan' of the TED Talks, and I didn’t know that a regular person could organize such an event. When I came back from that trip, I set myself the task of holding a TEDx event in La Paz, something which had never been done before.

TED is a non-profit organization devoted to 'Ideas Worth Spreading'. It started out as a conference bringing together people from three worlds: technology, entertainment and design. The success was such that later it gave a platform to such a variety of people and themes that it became an ideas-producing machine.

TED has become somewhat of a global tribe, where people are connected not physically or in creed, but through a shared ethos based on sharing ideas. Rather than marking its members apart from other people, it has brought them together by making the world aware of our commonalities, as well as what happens elsewhere on this planet. In the spirit of its mission of ideas worth spreading, TED created a program that gives communities, organizations and individuals the opportunity to stimulate dialogue in TED-like experiences at local levels, creating smaller tribes, so more people can get involved in this global movement. Today, one story or idea can flow from a community in the middle of Africa, and be known by the whole global community in the matter of hours. This initiative was given the name of TEDx, where the x signifies that the TED event was independently
organised.

I was determined to organise this event in my hometown of La Paz, in order to bring this movement to the place closest to me. More importantly, I wanted to share with the world ideas from Bolivia worth spreading.

Once I obtained the license, after a two-month process, the first step was to gather a group of TED lovers capable of thinking big and making this dream a reality. One of them was Rodrigo Barrenechea, who was part of this initiative from beginning to end. Some months later the university got involved and offered to help with various aspects, from funding to logistics. The theme was later chosen: 'Entrepreneurs: New Ideas for a New World', and we set out to find 7 speakers whose ideas and life experiences embodied the spirit we were looking for.

By 7:32 p.m. on the day of the event, I realized that something big has just happened. TEDxUCB has just taken place. We received a warm and thunderous applause from the audience, and everyone who stepped out of the coliseum seemed inspired and energised by the experience. As Ivanna Moreira, an attendee at the event, pointed out, ‘people left inspired by the high quality of the event, which is something you don’t see everyday here in La Paz’. Another person remarked: 'this was an event of an international level, not a Bolivian level'. I’m proud to say we created an impact on that day. We inspired the audience, we left our mark in the university and the city, and we created a new local TEDx tribe, from where hundreds of bolivians are now entitled to feel part of this global movement. The best part is that through organising this event we shared with the world so many ideas from Bolivia, many of which may find an audience, resonate, and inspire elsewhere. These are definitely ideas worth spreading.

* Amaru Villanueva Rance, Founder and Editor in Chief at Bolivian Express was invited to give a talk at this event. The talk, titled ‘The Accidental Entrepreneur’ will be available online in coming weeks.