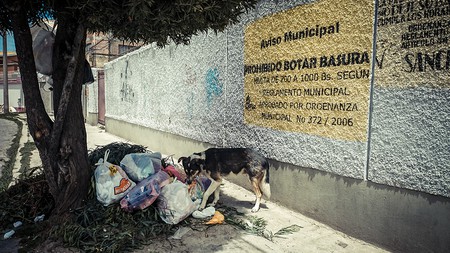 As consumption increases with the growing population, will waste be lining the streets in 20 years time? Where will all the rubbish go?

Trash, litter, rubbish, garbage, waste, refuse, junk, detritus: whatever word you use to describe the excess products of human consumption, it never sounds pleasant. When it is not immediately evident on the streets, it is hidden in a pit miles away from densely populated areas. Most people would prefer to live as far away from trash as possible, however, some individuals are converting trash into one of the unique selling points of their businesses.

According to Bolivia’s National Institute of Statistics, in 2012 La Paz produced 181,267 tonnes of waste, or approximately the combined weight of 1,000 average-sized blue whales. The World Bank’s most recent report on solid waste management in Bolivia estimates that the average citizen in the country generates 0.33kg of waste per day. This figure is dwarfed by that of the United Kingdom, where people produce 1.79kg of waste on a daily basis; and by that of the United States, where the figure jumps to 2.8kg daily.

No se hace reciclaje. (There is no recycling.)

Unlike in the UK and USA, where the annual generation of waste will probably decrease in the near future, Bolivia’s waste production is expected to increase by more than 50% by 2025. In La Paz alone, the growing population signals a future growth in consumption. Recently, a small-scale recycling plant opened in the city that separates plastic and sends it to Plastimadera, a firm that uses the waste to make school furniture. But without a larger-scale culture of recycling, or a structural method of separating rubbish implemented by the local government, La Paz seems headed for an all too common urban nightmare, that of the junkyard dystopia.

But hope is not lost, say the handful of paceños who are busy creating avant-garde restaurants, bars, and even community gardens with objects normally considered to be trash.They say the junk-laden nightmare does not have to become a reality.

Carola Ibañez and Katya Vergara are two of those driven and innovative people. Together, they founded Ciclick, a new organic restaurant situated in Sopocachi. ‘The restaurant is called Ciclick because it refers to a cycle – a cycle of eating good quality food, of visiting the restaurant and of using recycled materials in every feature of our interior design,’ Carola said from her chair, fashioned out of recycled wood from a building site.

In the restaurant space, light floods the room from the roof filtered by 70 reused glass bottles. The bar top is made from the original metal doors of the hall in which the restaurant currently operates. The tables are fitted with wheels and metal spokes from old bicycles; hanging lamps are made out of discarded hard drives; the interior is more Shoreditch-chic than recycled rubbish. It truly is art with a utilitarian use.

Even though Ciclick has been in business for only two months, every object in the restaurant has a long story behind it. The owners believe that must be one of the reasons why people are drawn to their restaurant. The public’s reaction has been positive and Carola assures me that using recycled art is a growing trend in restaurants and cafés throughout the city. One of the pioneer venues in this movement was the late night bar Diesel, which has been championing raw, recycled interior design for 14 years.

Other recycling initiatives in the city have an entirely different focus. Maria Teresa Nogales and Andrea Ibañez Pantoja lead Fundación Alternativas, a community-based organization aimed at ensuring food security in the city. The foundation cleans up the rubbish from urban areas to make way for community farms. Its members also promote separating glass and plastic from the general waste for recycling purposes.

María and Andres dream of a better and cleaner future for La Paz. The image they evoke of that future place is a city of gardens. Green spaces where communities can grow their own food, recycle and take care of their rubbish. The way they see it, education and better infrastructure for classifying the city’s rubbish could change the landscape dramatically. ‘La Paz is a city of entrepreneurs,’ María says. She and her partner are hopeful about the future.

The leaders of Fundación Alternativas are not alone in thinking of a garden. The landfill site of Alpacoma, which is the final resting point of all of the waste generated in La Paz, was recently renamed ‘El Nuevo Jardín de Alpacoma.’ But this ‘new garden’ is no garden at all. At least not yet. At 15km away from the nearest urban settlement, Alpacoma is a regular landfill site and a park in the making.

In 20 years, when the Alpacoma site reaches its maximum capacity, the authorities plan to cover it over and turn it into a public garden. The Council of the German city Bonn, which is working in tandem with the local government of La Paz, sent a team to this year inspect the site and concluded that the project complies with international environmental regulations. This is definitely a positive development. Taking into account the strong anti-littering campaign currently active in La Paz, one can be driven to feel overly optimistic about the future of waste management in Bolivia.

But is it enough to push all the waste of a city under the carpet of a garden? What happens after the garden is finished? It seems that a sustainable solution for waste management in La Paz must also include a strategy to reduce the amount of disposable waste generated in the city. Recycling initiatives like the ones currently emerging in La Paz could go a long way to achieve this objective.