TAHUICHI: MUCH MORE THAN A FOOTBALL ACADEMY 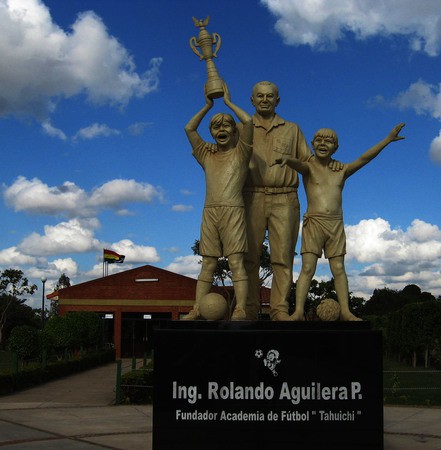 ‘Roly, with the Tahuchi Academy, has revolutionized the world of children’s football’, famed Brazilian football star Pelé said about the dream of engineer Rolando Aguilera Pareja, who wanted to provide to children the opportunity to realize their dreams of playing football and thrive in other areas of their lives. So in May 1978, Aguilera created the Tauhichi Academy, where children learn football as a fundamental tool for social action and education.

Thirty-six years after its creation, the Tahuichi Academy does not lack international recognition: it was named an ‘Ambassador of the Youth’ by the Organization of American States in 1984. When it received the Condor of the Andes, the highest distinction from the Bolivian government, then–head of state Gen. Hugo Banzer praised Aguilera, saying, ‘He is a man quintessential in sports education.’ The academy has also been repeatedly nominated for the Nobel Peace Prize, and Rigoberta Menchú​​, a Nobel Prize winner herself, said, ‘Tahuichi children are the hope of a more fraternal and humane world.’

The school is named in memory of Aguilera’s father, Ramón ‘Tahuichi’ Aguilera, who played for Bolivia’s Florida team. ‘Tahuchi’ means ‘big bird’ in Tupi-Guarani. There is also a stadium in Santa Cruz, named after him, the Estadio Ramón 'Tahuichi' Aguilera.

A year after its creation, the Tahuchi Academy’s team won its first Bolivian children’s championship, and since then its fame has spread worldwide, so much so that in 1985 FIFA organized the first under-16 World Championship in honor of it in China.

In 1996, Aguilera organised the the Tahuchi ‘Peace and Unity’ Little World Cup, a yearly under-15 tournament held in Bolivia. It celebrated its 19th anniversary this past January, with participating teams from around the world. Other countries have followed suit, according to the academy’s press officer, Jalqui Gutierrez: ‘Even the South American Football Confederation has formalized its own sub-15 championships, inspired by the achievements of the Tahuchi ‘Peace and Unity’ Little World Cup.’ (And, underscoring the importance of Tahuchi, some former competitors from the ‘Peace and Unity’ tournament will play in the this year’s World Cup in Brazil.).

But the trophies and international recognition would be nothing without the academy’s overriding mission: ‘The purpose of this is to give young people the opportunity to play sports in a healthy way, teaching useful skills for life, against social risks, such as drugs and crime’, says Mabel Añez, the social responsibility coordinator for the school. ‘Social action has become the basis of the academy in the last 10 years.’ To date, over 300,000 children between the ages of 3 and 15 have attended the academy; 85 percent attended free of change, thanks to scholarships for homeless and low-income Bolivian children. Tahuichi also provides medical and nutritional services to about 3,000 children both on and off the pitch in addition to its soccer clinics. Girls also participate in the academy’s programs and have found great success in international matches.

Various partnerships with schools and colleges throughout Bolivia and abroad provide scholarships to Tauhichi grads, with 625 scholarships having been distributed, 133 of them to study abroad. Eddy Hurtado, a former student at the academy and now the head of its human resources department, says that ‘the players that manage to turn professional are exceptions, but Tauhichi gives children the chance to thrive’ in any area of life. Hurtado arrived at the academy from the Chapare region when he was 16 years old. ‘It was a great opportunity to change my life. It gave me the opportunity to play football, travel a lot, and now it gave me work.’ Through the academy, he won a scholarship to study in the United States, and now he’s active in helping out new students. ‘Tahuichi changed my life’, he says, ‘and now I can pass that on to future generations.’