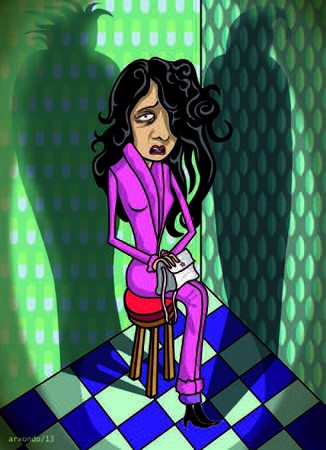 In the city of La Paz, Andean cosmology has its own conception regarding the treatment of madness.

In the waiting room of la Caja Nacional de Salud (a psychiatric hospital) the clock on the wall shows it is almost 12:50. The secretary who works there saves her files on the computer and turns to a pair of patients seated on the bench. ‘The doctors are busy’, she says. ‘There is a strike and people are marching. I don’t know what time they can see you. Wait, if you like’.

A plain-looking young woman, sporting a heavy pink coat in the heat of the midday sun, bumps into the secretary at the door. She enters and gives a shy greeting in a soft but hurried voice, and covers her face with her greasy hair upon receiving no response from the secretary. She sits down on the bench and disguises the shame of having been ignored by taking out lipstick from her purse and touching up her make-up.

Her name is Raquel and she is 32, though she introduces herself as Valeria and claims to be only 19. She’s been coming to see the psychiatrist for seven years and yet the cold walls of the room still make her uncomfortable. At present, she lives in Cruce Ventilla, on the road to Oruro, and works in a hair salon.

That’s where she had the first symptoms of her mental illness, a condition her neighbours understood as possession by an evil spirit. She hears voices of men that only exist in her head. The male voices usually speak when she wears red clothing, saying that they want to rape her.

‘My yatiri says that there is a mad spirit inside me performing witchcraft’, says Raquel, while looking at the waiting room ceiling. It’s 15:30 by now and she is the only patient still waiting there.

People like Raquel, who endure mental illness, are treated in this psychiatric hospital and yet they often also visit traditional doctors, due to local beliefs regarding madness. In Andean cosmology, these doctors (or wise men) are known as ‘yatiris’ and they are often charged with the task of treating conditions that do not have rational explanations. This, at least, is how Dr. Fernando Cajías de La Vega explains it, adding that in Aymara culture madness is seen as an otherworldly infliction. Only the yatiris, he says, have a way of understanding, treating and curing the illness. People say yatiris were chosen by Aymara gods to do so, making the wise men very busy and well-respected individuals.

Today, people in La Paz continue to seek their advice and assistance. Yatiris acquire their materials from Sagárnaga street, known as ‘The Witches’ Market’, although they often require no more than coca leaves and alcohol for their work. In special cases, during the ch’allas, or the treatment of a sick patient, they visit the home of whom they wish to see. ‘Everything has its price’, says Dr. Cajías.

According to David, a yatiri living in Pucarani, traditional doctors have different abilities. They can diagnose people's past, present and future, and, because of their connection with the gods, they can physically and spiritually cure patients afflicted by either ailments or curses. Many people look to them precisely for these abilities.

According to David, other types of yatiris who are corrupt and ‘diverted by the path of evil’, can also inflict curses on healthy individuals. These doctors are known as laigas and specialize in inflicting pain onto others. They have the ability to bring about madness using people’s bodies as recipients of evil spirits.

Laigas create a link between a person and a curse by using something that pertains to the victim (a piece of clothing, a lock of hair, some type of object, etc). After giving an offering to an evil spirit, the laiga draws it to the recipient’s body, causing abrupt changes in the victim’s behaviour. According to Raquel’s mother, this is precisely what caused her daughter’s madness, after a young man who had been in love with her asked a laiga to cast a spell on her. The young man allegedly offered a piece of Raquel’s red clothing in order to curse her, after which the laiga brought forth a soul which attracts men to the victim, especially when she’s using red clothing.

Raquel believes that an element of mysticism exists in what is happening to her, but she also trusts the psychiatrist she visits regularly. He tells her the voices she hears don’t have a cure, but that she can control them with medicine, therapy, and sustained treatment.

Raquel was diagnosed with paranoid schizophrenia, which, according to Dr. Mario Sánchez, is an illness that causes emotional problems on top of hallucinations. ‘A lack of emotion is brought about, one doesn’t react emotionally’, explains Sánchez. The family suffers a great deal, as does the affected individual, who becomes depressed and loses willpower.

Although she is constantly touching-up the color of her lips, one can see Raquel’s lack of motivation in her personal neglect. She looks at herself in the mirror, holding it with rough hands that reveal her chewed up fingernails. The dirt underneath them mixes with residues of the red nail polish she put on several weeks ago. Her long hair, put up in a ponytail, reveals the accumulated dirtiness of her scalp and the faded, split ends that fall softly down her back. The pain and the suffering that she endures in her heart is present in her vacant gaze, fixed on the mosaic floor in front of the doctor’s door.

The medications help control the hallucinations, Dr. Mario Sánchez explains, but there is no cure for the patient’s depression. ‘The medications leave you without motivation to do anything, like a cat that only wants to sleep’, says Raquel, leaning on the shoulder of a friend she just met in the waiting room. Specialists confirm that patients stop taking medications because of these side effects, as well as the cost and difficulty of obtaining them.

Dr. Mario Sánchez explains that it is common for patients to leave psychiatric hospitals to seek treatment from yatiris, explaining it is pretty common amongst the lower classes. He adds, ‘Maybe the middle class does it too, but they don’t mention it’. When they return to the hospital, they appear to have improved, although many times they return in a deteriorated state or, in the worst cases, they return with bad news.

Sánchez recalls that some time ago he tended to two brothers with schizophrenia who lived in Viacha, ‘the family and the community abandoned them, everyone behaved aggressively towards them. I got the impression that they could have done something to these patients, because all of a sudden they stopped coming to the psychiatrist appointments; one had disappeared and the other, we found out, had died’.

People with mental illnesses are often seen as an evil presence in their community. Since they are perceived as a negative reflection of the social group, the community often forces the family to address the problem with the help of yatiris.

Although in La Paz schizophrenics turn to yatiris unbeknownst to their doctors, in Cochabamba, these patients engage in rituals with their yatiris inside the hospital. In the Corazón de Jesús Hospital, for example, traditional doctors come from afar and use incense, cleansings and offerings to the gods to ensure the mentally ill are well tended to.

‘In Tarija, the “crazies” walk the streets’, Dr. Sánchez says. ‘They are given work, and violence against them is rare. They are poor people, deep in their own world’.

Psychiatrists indicate that 80% of schizophrenics recover, but that the remaining 20% are incapable of continuing their daily lives and are institutionalized, in some cases for life. On top of this reality, the World Psychiatric Association claims that 83% of the global population doesn’t know what schizophrenia is. The Aymara, whose cultural background provides a different understanding of this type of madness, most likely fall in this category: they can’t be said to know what schizophrenia is.

Raquel grabs her belongings and a man in a white coat hurriedly enters the room. Ignoring her greeting, he enters his office and closes the door. Raquel stops abruptly and is crowded against other patients trying to enter before her. The clock in the waiting room shows 16:50.