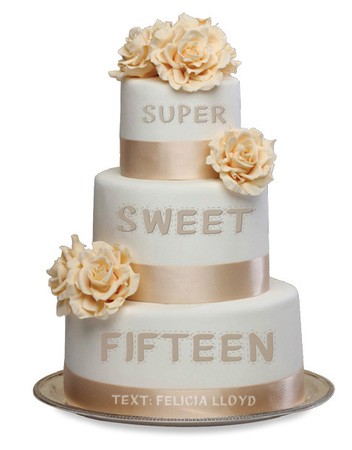 Chicas in Bolivia don't have a super sweet sixteen, they have a super sweet fifteen. There are other grand events such as weddings and 'prestes' where the large and idiosyncratic catering industry shows off its best cakes, canapés and treats. Fliss's job is to visit some of these firms, and hopefully events, to check out their grandest and most extravagant creations.

A white dress, a grand cake, heartfelt champagne toasts, and adoring crowds of family and friends, diligently doting on your every desire—this describes what, for some girls, is the happiest day of a woman's life: the Wedding Day. Except that here, in Bolivia, this also describes another of the most significant celebrations in a girl’s life: the Quinceañera party.

Western interpretations of this celebration have resulted in gaudy shows such as 'My Super Sweet 16', which conjure horrible images of 'Veruca Salt'-style girls let loose with Daddy's credit card to have the most extravagant, money-burning bonanza to boast to your closest friends. In Bolivia, though, at the age of fifteen, a young girl's entry into womanhood is celebrated as a rite of passage by the entire family with anything from a quiet family barbecue to a huge 1920's ball to mark a debutante’s entrance into society.

Traditionally, the ceremony starts with a Mass, where the girl is presented with gifts from her friends and family, whilst wearing flat shoes. The event then progresses to a party, where she is presented to those in attendance by her father with her first pair of heels, symbolizing her transition to womanhood. This is a party like no other. No detail is overlooked to make this the most wonderful of days—especially not the cake.

As is tradition in Bolivia, the quinceañera cake plays a significant role in the proceedings. Since the Quinceañera is the ‘Queen’ of the party, she has a court customarily made up of ‘siete damas y siete pajes’, ‘seven maids of honour and seven pages’ of her choice. This group of 15 is represented by 15 dolls who ascend the stairs connecting the multiple tiers of the cake. Since these parties are grandiose in glamour and size and can sometimes host up to 400 people, the cake has to be prepared accordingly.

So you're fifteen and suddenly involved in planning one of the biggest celebrations of your life, armed with a certain budget and an insatiable desire for perfection—how do you choose the right cake? And where do you go to find it? A research investigation that took me up to the Max Paredes commercial district of La Paz (and resulted in one of the best mornings of my life sampling various types of cake), showed me the traditional types of cream covered cakes sold to the people of this city.

Generosity knows no bounds here, and so when I approached some of the cake vendors in town they were more than happy to cut me a free slice of their product. Light, fluffy, creamy and very sweetly flavoured, the cakes were the exact kind of crowd-pleasers I had imagined. With our mouths full of cream, we set out to find out more about the creation and cost of such masterpieces.

Baked with flour, butter, crema de leche , nuts and the incessantly coveted (in the BX household) dulce de leche, the cakes are then covered in elaborate designs with flowers, biscuits, fruit and unthinkable colours of jelly. These cakes are both a sight for sore eyes and a food for the soul. When we asked for prices, the vendors told us that on average a cake for 300 people would cost around 1200 Bolivianos ($150), transport included.

A trip downtown took us to some slightly more upmarket bakeries that cater for similar events. I needed a façade. Under the pretense of wanting to actually throw a Quinceañera myself, the owner of the bakery and I sat down to discuss the logistics of catering, and the type of cake I might like (though frankly I wanted them all).

The contrast between the two different types of vendors was stark. For one, the upscale bakery didn't offer us any cake, immediately making it a less appealing option. Secondly, the bakery didn’t have any prepared cakes to exhibit, and so we had no choice but to flick through a catalogue of elegant pictures, featuring delicate multi-tiered cakes adorned with flowers, stencils, gems and ribbons, like those you might find at a wedding.

Essentially, the cakes from both types of vendors had much of the same ingredients, but the upmarket bakery offered the choice of chocolate flavourings and frosting. When I asked for the prices of their masterpieces, it was lucky they hadn't offered me any cake as my jaw dropped: transport included, a cake from this bakery for 300 people would cost nearly 3500 Bolivianos ($500). At almost three times the minimum wage, this was clearly an extravagance only an elite minority can afford.

But how are these masterpieces created? How much time and effort goes into the preparation? Surely something as crucial as cake for such an important event would take several weeks to prepare? Interestingly enough, this was not the case.

Speaking to the owner of Pasteleria Nataly in Max Paredes, I was informed that to produce one of these veritable works of art, the bakery needs a week to gather the more intricate ingredients (such as jelly, vanilla essence and colorants), but only an evening to actually put the cake together, no matter the size of the order. This in itself is quite astounding, since the Quinceañera Queens often ask for a variety of complex shaped cakes, ranging from basic circular and rectangular, to those mimicking the favourite hobby or interest of the Queen: stars, flowers, football, or even the figure of the girl herself (a horrifying level of complexity I can attest to, after having spent a whole term in school in Food Technology classes trying to make a novelty ‘Pumpkin Cake’). The most popular flavouring of cake is ‘nuts and black forest fruits’, whose success could be attributed to the fact that all ingredients (flour, nuts, chocolate and fruits) are sourced locally, fresh from the market street on which her shop is located.

From personal, if haphazard, experience in cake baking (I just don't understand how it is they’re supposed to rise), it was a marvel for me to learn the ease at which these women bake the cakes. When speaking to Nataly, I couldn't help but notice the size of her tiny shop and her children running around her, pulling at her sleeves, crying to be fed. During the interview, she hoisted her baby onto her hip and began to breastfeed, while simultaneously clearing her other daughter's lunch and coherently following all my questions and guiding me through her cake catalogue. Nataly was, however, bemused by my awe. Smiling, she told me that ‘nothing is too difficult when you have the patience’.

Unfortunately, to the bakeries were as far as my research would allow me to go. Not having befriended a soon-to-be fifteen year old in my time out here, I couldn't get an invite to a Quinceañera party, and so never got a slice of the action. I did learn, however, that no attempt at a cake for a Quinceañera, nor the event itself, is ever half-baked.