Success and The Inner Game 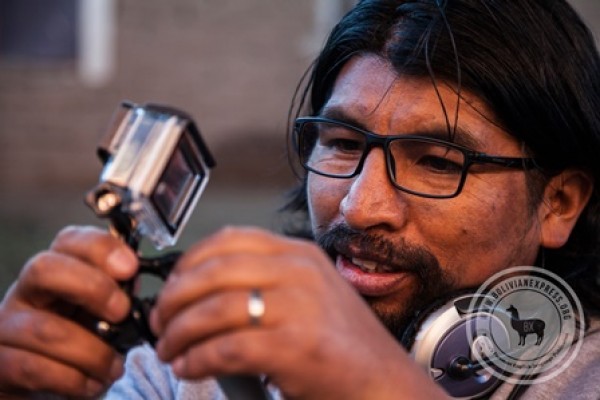 He’s holding a metal frame he fabricated with screws and tape to stabilise a tiny GoPro action camera. I seem to be in the middle of nowhere, but actually I am in the far reaches of El Alto, in a young neighbourhood called Urbanización 31 de Noviembre. I don’t quite know what I’m doing here, except that I’ve followed this man to this place and he is currently directing an action scene. We are in a partially built house. Powdered cement rushes to the air as two actors engage in a staged fight.

Juan Carlos Aduviri made his name acting in the acclaimed film Even the Rain, performing alongside Gael García Bernal. He has acted in several roles since, but is chiefly following his goal of becoming a director and cinematographer. Born and raised in El Alto, he says ‘life itself is an adventure’, and hopes to show the world ‘this crazy city’. His coaching classes to young aspiring actors and directors seem to be an expansion of this vision. The fact that he’s working on one movie that ends with the beginning, and another filmed entirely with GoPros, demonstrates his distinct style of filmmaking.

Juan Carlos grew up in a poor family with eight siblings. His mother and partially disabled father often went to the countryside to work during the planting and harvest seasons, leaving him to look after his younger siblings. He recalls how in high school the teachers thought he had limited potential because, as he says, ‘I suffered from dyslexia, so I was a bad student’. But growing up in an Aymara community in a semi-rural area outside La Paz, he was surrounded by a culture he describes as ‘giving’, in which young people shared this view. Now, he says the world, including the communities near where he grew up, are increasingly individualistic. I hear a recent example of how his wife was thrown off her seat on a bus by a woman who sat in it.

People often glance over the mindset, the ‘inner-game’ of the individual who has achieved success.

Given his difficulties in reading, Juan Carlos spent much of his high school years focusing for hours on the images of his brothers’ comics. Around this time he bought a VHS player and watched whatever film he could. He says the comic books and movies, despite his challenges, were never an escape for him, nor a place to hide. ‘I’ve never seen my past as something sad,’ he points out. ‘Films and TV helped me travel, but not escape reality.’

Today, Juan Carlos watches one movie a day, noting he recently watched Interstellar three times in one week – a clear sign of his obsession with cinematography. I ask him if he sees himself as an adventurer, an explorer. ‘Not only physically, but also in the mind,’ he responds. I tell him I view myself in a similar way, and we high five. It is apparent he has a rigorous determination to keep exploring, to achieve further success.

In May 2009, Juan Carlos received a call. He had the opportunity to audition for an international film shooting in Bolivia. Even the Rain was a telling of the very real events of the early 2000’s in Cochabamba, when communities rose up against the privatisation of Bolivia’s water supply. He got the role, playing the lead Bolivian character, and was nominated for the Goya Award for Best New Actor.

After the film’s success, Juan Carlos was given a chance to leave and go to Canada, but chose to stay in El Alto. He feels he has much more to give. ‘I want to show my Bolivia to the people of the world,’ he says, and points out that he doesn’t have dreams, he has goals – achievable things. He sees El Alto, and all its quirks, as a ‘Wild West’ of sorts, and firmly believes a distinct style of cinematography can come from the city.

Though he acts, Juan Carlos focuses on being a director and cinematographer. He surrounds himself with people who will help achieve this vision and, of course, they are chiefly from El Alto. His companions are not yet famous in the film community, almost underground, but Juan Carlos assures me they relish their craft, their talents are being nurtured, and they soon will be more prominent. He knows this symbiotic relationship will make him a better director.

When I ask him what one thing he would change in the world, he is not pensive, as if he has thought about this before. ‘No borders,’ he answers firmly. To him, the world is increasingly isolationist and the core of this problem is that it is borne out of fear, just as borders are. ‘Borders are proof of human decadency and are breaking the links between people,’ he elaborates.

People often marvel at actions and achievements, but glance over the mindset, the ‘inner-game’ of the individual who has achieved some success. Speaking to Juan Carlos it is evident that his mindset, his ‘worldview’ forms him. He has been forged by his life in the city of El Alto and the people that make up that place.

‘I’ve never seen my past as something sad. Films and TV helped me travel, but not escape reality.’ Juan Carlos Aduviri

When he was young, Juan Carlos told his brother that he was going to be a cinematographer. The response was questioning, as he remembers his brother saying that such a goal was unachievable, and that Juan Carlos ‘would always be an “Indian”’. Juan laughs as he recalls the memory. ‘My brother was right,’ he says, ‘in the movies I do play the Indian!’ But even back then his drive was persistent. Once he said aloud that he would be a cinematographer, he knew he had to do it.

And here we are, in El Alto, filming away with his makeshift equipment. The cement rushes to the air and Juan calls out, ‘¡Buenísimo!’ He is happy with this take.