As a date with Bolivia’s number one swimmer, Hector Andres Viscarra Bustillo, loomed, I naturally tried everything I could to find out as much as possible about him. Unfortunately ‘Google’ couldn’t come up with the goods, and neither could ‘Wikipedia’; in fact online there was next to nothing about Bolivian swimming, or even swimming in Latin America whatsoever. Thinking this was slightly strange for one of South America’s top swimmers, I was starting to get rather sceptical about the man that I had been reliably informed was ‘one of Bolivia’s best’.

Like many other people in the UK, swimming only really appears on my radar once every four years, since for the first few days of the wall-to-wall Olympic coverage, swimming seems to be just about the only sport the Brits excel in, and thus gets ample BBC footage. Consequently, these four to five days are pretty much where my knowledge of swimming starts and ends, so in an attempt to sound clued-up to Bolivia’s most famous water dweller, I called upon a very reliable source from back home to give me the low down on the world of swimming. Hector’s mother drove us to the impressive facility and sports complex in the ‘Zona Sur’, La Paz’s richest suburb, and with Hector crammed in the boot she proudly showed us some of the silverware he had amassed in his young career. A considerable highlight was a wooden paddle which he had been given recently for winning a race on Lake Titicaca. As if to prove that swimming was more than just a very efficient way of not drowning, Hector changed and had a splash around in the pool, posing for some photos in the front crawl position with proficiency and panache befitting one of South America’s finest. He eventually settled into position on the side of the pool, and the interrogation began. 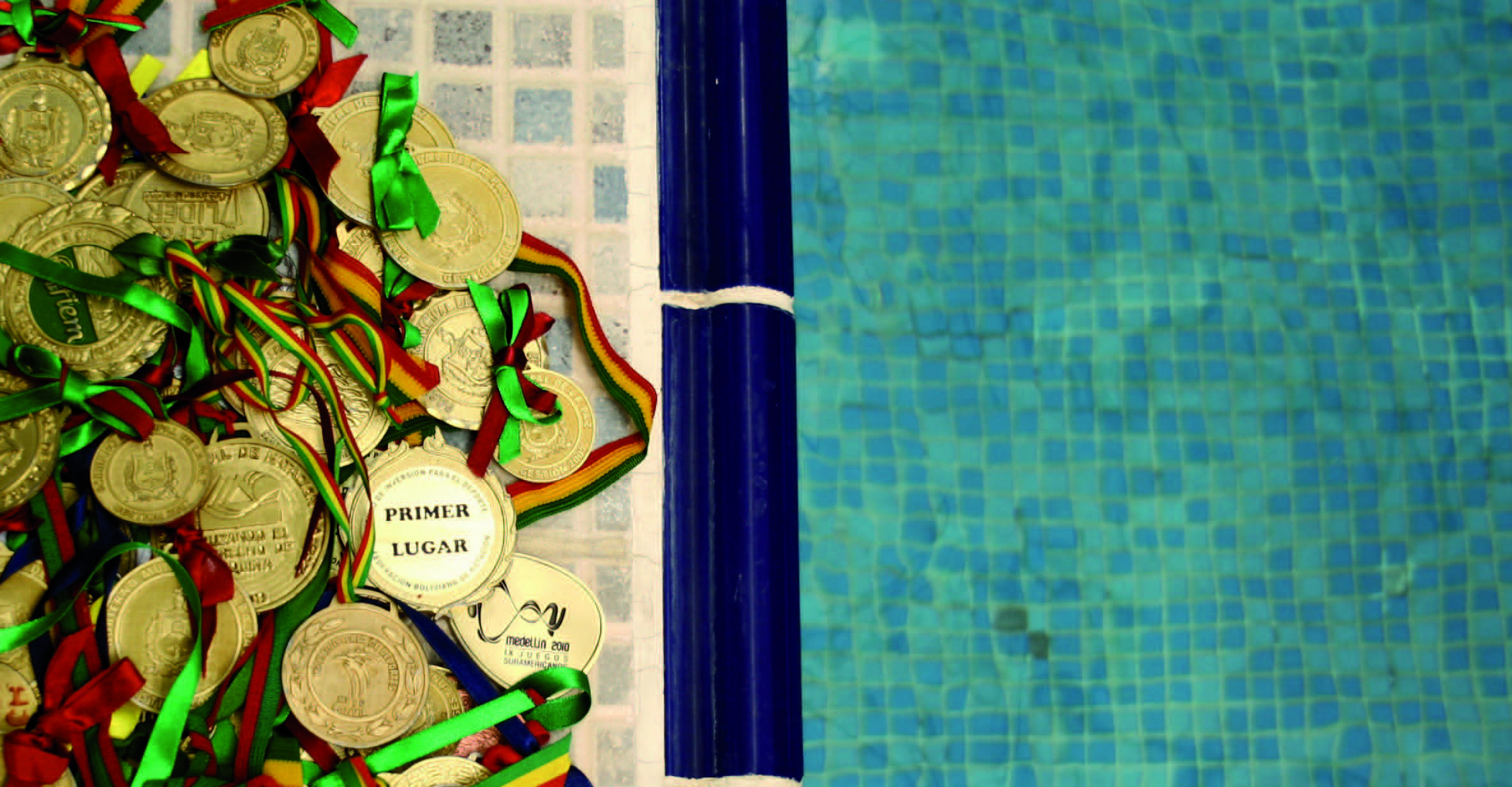 Unfortunately, what soon became clear was that the avid research I had conducted beforehand would be completely useless; as it turns out he is in fact an ‘open water’ swimmer, meaning that all the complex swim suit technology engineered to take milliseconds off times didn’t apply to him at all, and all the research I had conducted about altitude training in the pool was completely redundant. Undeterred, I pressed him on what it was like to be a swimmer in Bolivia, whether anybody knew who he was, or whether the press or media ever took any notice of what he was up to. He laughed this one off, simply saying ‘I’m not a footballer!’ In Bolivia it seems that to gain any kind of sporting fame you have to be a footballer, simply because it is the only sport which has regular television cover- age and mass appeal. The same can be said in Europe, as football tends to be the only the sport which has year round media coverage, and thus the biggest most famous faces. But did he begrudge the media attention and wealth that footballers command? De- spite the fact that he is arguably more successful, no Bolivian football player could lay claim to being the third best on the continent! ‘No, football is very competitive and difficult to become an important player, and also it is much easier to train and study when the media are not calling you for information.’

This level headed and reasoned approach revealed that at the same time as being a near enough full time athlete, he is also studying a gruelling engineering degree. He went on to explain the difficulty in balancing the student lifestyle with being an elite sportsman. Going out with his friends was cited as the main sacrifice, since with early morning training sessions and regular competitions it was vital not to waste all the good work he has been putting in. So surely when you compete and train you have to miss classes from time to time? His response was that in reality studies come first, and along with his Cuban coach Orlando Valdez, they build his schedule around his studies and his examination periods. His basic schedule revolved around eating a lot and training around 2000-4000 metres per day in the pool. But surely this is completely different from your competitions? Answer: ‘yes!’ However, clearly the main difference is the water temperatures involved. During a race on Lake Titicaca a few weeks ago Hector swam in temperatures of 7°C, whereas the normal temperatures for competitors in Europe and elsewhere in the world are from 16-17°C. To combat these temperatures you have ‘to swim very fast!’ and also on a more practical level, lather your body up with Vaseline and a menthol solution, as well as again taking on vast amounts of food to keep the fat content up in your body.

Astonished at how he could possibly function in these water temperatures without cramping I felt inexplicably compelled to tell him about my problems with my feet cramping every time I went swimming…Needless to say this was not a problem he had ever experienced, but still seemed to have some sympathy for my curtailed career.

Knowing very little about open water swimming I wanted to find out more about the races themselves, so asked him whether there was much in the way of ‘tactics’ in the water, in other words ‘fighting’. His eyes lit up as he then went into great detail about how ‘holding your space’ at the beginning was one of the most important parts of the race. ‘There are judges but it is extremely difficult for them to see what happens under the water, so kicking someone who is just behind you can be made to look very accidental. To be honest the advice of my coach is to get ahead early and then get away from the pack, and then it is more about the swimming.’ And it appears this tactic has brought him much success, judging not only by the weight of his medals basket, but also by the news that he has recently become the Bolivian record holder at 10km, swimming in a time of 1 hour 22 minutes in Tarija. Whilst this is nearly half an hour off the world times of the top athletes from Europe and the U.S.A. a Bolivian record is a Bolivian record, and when you consider that he is essentially part time athlete, this is an impressive feat. I then quizzed him on the impact of the altitude on his times and also, crucially, on his com- petition, as people from the low lands come to compete in places like Tarija. 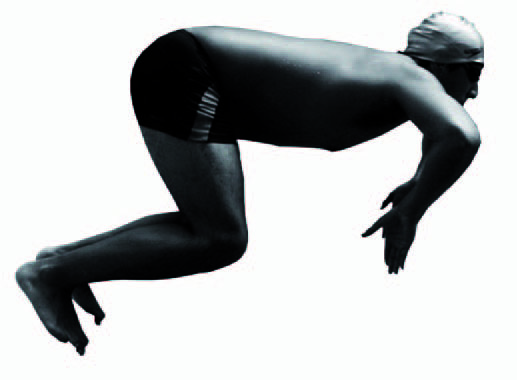 He was keen to play down the impact of the altitude, saying that the water made for a slight altitude leveller, as for the science in this theory neither I nor he was sure, but he felt that he was at little to no advantage when competing in coastal races.

We finished our discussion with his even- tual goals and ambitions in swimming. Next up are the Pan-American Games in Guadalajara, Mexico, which he hopes to qualify for. He does not hold high hopes for the London Olympics in 2012, as they are both a long way in the future, and daunting qualifying times loom. He then went on to describe how ultimately his studies in engineering, and getting a good job as a result of this degree would be what secures his financial security in the long run, not the swimming. It seems that this is the reality of most sports in Bolivia, unless you are a footballer it seems there always has to be a back up. In the fortunate case of Hector Andres Viscarra Bustillo, he has the chance to live the dream, before settling on a prestigious career as an engineer. At the same time as being a near enough full time athlete, he is also studying a gruelling engineering degree. Along with his coach, they build his schedule around his studies and his examination periods.