Street and Urban Art according to Knorke Leaf 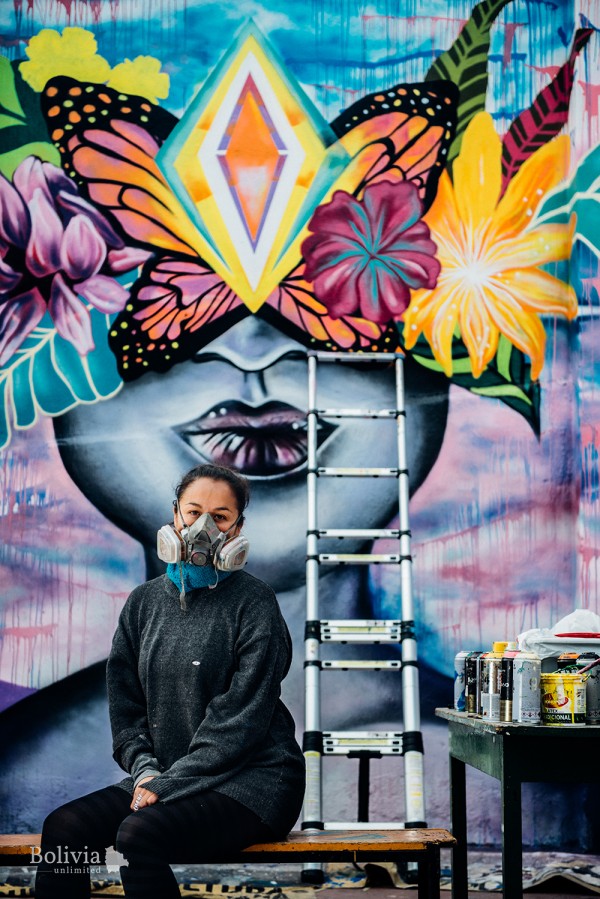 The prominent Bolivian street artist Knorke Leaf has much to say on the power of street and urban art: ‘It’s a spiritual power...’ she muses. ‘It’s in the colours.’ Her artistic actions and her involvement in several projects aim to highlight the power that street art can have. In previous years, she was involved in a project associated with #TimeToAct, which addressed the issue of sexual violence. In addition, she has collaborated with ‘Habitat for Humanity’ to provide adequate housing conditions for children returning home after cancer treatment. At present, Leaf is working on a mural for the youth section of Fundación La Paz, which is a community style project that provides art therapy for people facing social, economic and familial issues.

With art, there is often no need to talk because the art does the talking. Although Leaf holds a Masters in Fine Arts, she has seemingly realigned her creative spirit to the forms of urban art. She often emphasises the notion that the streets are free from rules and judgement, and do not limit the styles people have to abide by. What is important is what you ‘feel inside,’ Leaf says. Street art is not limited in the way many traditional art forms are. For Leaf, galleries are evidence of how institutionalised and exclusive the art world has become, while in contrast the streets are  inclusive spaces, somewhere everyone belongs.

But, there are challenges involved in being a female artist in a predominantly male scene. The main challenge is not fitting in or seeking approval from her peers, but rather representing  Bolivia as a female artist. She was once invited to Denmark, for example, as the only female artist among seven men who were more experienced than she was at the time. It was a valuable learning opportunity for her. Although Leaf has been invited to a number of arts festivals in Europe, this has not been the case in her home country. ‘In Bolivia,’ she says, ‘it seems festivals are only for guys.’

‘At the beginning people are always reserved,’ Leaf says, describing the reactions she has observed to her artwork. ‘It’s always a struggle,’ she continues. Recently, she was involved in a project in Sucre with a number of children and people who ‘freaked out’ at them painting a wall in black. However, once the mural was complete, reactions were quite different. Although reactions to her work can be extreme at time, she does not receive much negativity: ‘At the end they love it,’ she says, with a hint of satisfaction.

Leaf sustains that she has no style. ‘Or if I do, I don’t care about it,’ she says, but she is visible  influenced by images in nature and by animals as well as by the rights and struggles of women. She claims that the stories of people she meets on the street are what most influence her work ‘and give [it] a lot of sensitivity.’

Her philosophy towards nature and people is very inspiring: by harming nature we harm ourselves, she asserts. ‘We forget what is important. Violence against the bodies of women is violence against mother nature,’ Leaf says, suggesting that as humans we have a great responsibility toward nature. She believes that we are more than ‘just people’, that we have relationships with other beings and thus have a responsibility with the rest of the world.

In a similar line of thought, Leaf sees a special link between painting and self. Painting has limitations, just like people. People are not perfect and do not have to be. ‘The idea of perfect makes you crazy,’ Leaf explains. This is why painting is a humbling activity for her that involves creating imperfections. Perfection is an unattainable ideal and street art is about these imperfections.