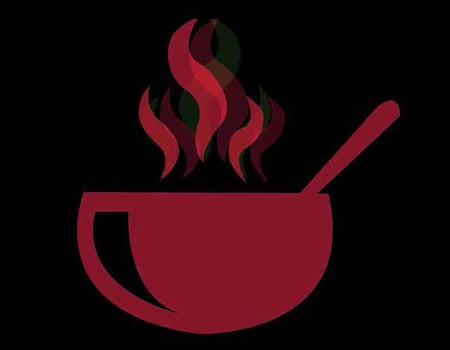 A Quechua soup originating from Potosí, kallapurca is thought to have been popularised around the 17th century. Characterised above all by the fact that the broth is boiled using heated pieces of volcanic rock placed in the bowl, it likely originated from the era when fire cooking was less common in the colder regions of Bolivia. Although it is an ancient dish, its nature has evolved over time -- today’s kallapurca is produced with more garlic and other flavours brought over by the Spanish conquistadores.

The environment in which this dish emerged is key to understanding its nature. Potosí is a cold, barren part of the country, where campesinos have to exert back-breaking effort to farm the meagre produce the harsh land is willing to yield. Often starting their workday at 5 am, by 10 am kallapurca is the dish of choice. It’s a spicy and heavy dish—nutritionally perfect for the campesinos to help them recuperate and prepare for many more hours of gruelling work. Furthermore, kallapurca has its roots placed firmly in Potosí’s culinary tradition; the history and rituals of the region reflected in this ordinary food, that remains as popular now as it has ever been.

As a traditional dish, it requires some ingredients that are often not possible to find outside Bolivia, including willkaparu and mote pelado (peeled corn kernels). Kallapurca is rich in both calories and protein, which lends itself well to manual labor high in the Andes -- giving those under the cosh the energy, strength and endurance to keep on going.
Kallapurca cannot be reproduced so easily in other parts of the country, not least because its signature volcanic rock has to be transported from Potosí. Nevertheless, it is still available—though not common—in other parts of the Andes. In La Paz, the best place to find kallapurca is on Calle Conchitas in the San Pedro neighborhood, near Franz Tamayo University.

We spoke to a Swiss tourist named Hannah who had recently eaten the dish in Potosí, and she expressed incredulity: ‘I couldn’t believe it! A soup of stones! I thought it was some kind of joke’. Very few ever master the preparation of kallapurca. Luisa, from Potosí, said, ‘I tried to learn how to cook it so as to serve at home, but it just couldn’t be done. I think only certain people can ever learn’. Despite being such a unique dish to us foreigners, it’s perfectly normal for locals, both for the older generation who work and also for the youngsters, who know it as a foolproof hangover cure. With its thick and spicy flavour, kallapurca is always being reinvented. Now it seems it has found a new life as the top choice for those potosinos who can’t remember much about their previous night...