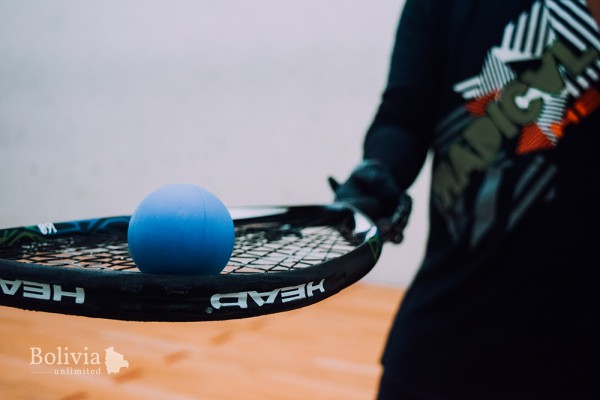 I am out of breath just watching. As the game intensifies, the shouts become louder, the challenges to the umpire become fiercer, and the players more frequently put their bodies on the line to win each point. A true battle is unfolding in front of me, and I instantly feel obliged to support the players I have met just ten minutes beforehand. I watch the intensity evolve from a bench safely behind glass, barely able to track the swiftly moving ball. This is only the doubles semifinal of the La Paz Men’s Regional Racquetball Championship, yet it feels like a fight for Olympic gold.

Raquetbol, as it is commonly known in English, is extremely popular in Bolivia, having grown in recent years to the country’s second most popular sport, and providing fierce local competition alongside international recognition. In fact, it’s grown so much that Bolivia is looking to win its first gold medal in the sport this summer at the Pan American Games, taking place in Lima, Peru, from 26 July to 11 August.

After he catches his breath (much more quickly than I expected!), I am able to speak with Germán Rojas Vargas, a paceño player whom I’d been following during the match. His Captain America top, snazzy protective eyewear, knee pads and fluorescent right-hand glove tell me that Rojas meant business. ‘Bolivia has always stood out,’ he says before his singles match. ‘We are very talented and are achieving a lot.’ As he hastily ran off, the atmosphere around the courts oozed tension but also excitement and energy from players and supporters alike.

The Bolivian Racquetball Federation (FEBORA) was founded in 1982; since then, it has grown all over the country, and currently seven of Bolivia’s nine departments have established associations and squash sports complexes. ‘Our aim is that everyone in the country can play this sport,’ says FEBORA’s president, Gonzalo Alcoreza. In La Paz, the first complex was completed in 2008, after international acclaim prompted the municipal government to invest in the sport. Now, as the sport’s popularity has skyrocketed, other racquetball complexes have sprung up all over the country. For young people ages 8-16, the training is free at these facilities, which has encouraged young players to take up the sport as an alternative to football.

All levels in Bolivia compete together, which means that up-and-comers have access to the top players, and training even at the lower levels can be intense.

At the international level, Bolivia has competed in every Pan American Games since 1967, yet didn’t earn its first medal until 1991, in the taekwondo competition. At the last games, in 2015, Bolivia took home two bronze and one silver medal, all in racquetball – but still no gold. Could 2019 finally be Bolivia’s year?

Conrrado Moscoso, a Bolivian racquetball celebrity who won three gold medals in the South American Games in 2018, certainly thinks so. After more success at the Open Bolivia American Iris competition in March 2019, he even got a Twitter congratulations from President Morales himself, who thanked Moscoso for ‘giving this joy to #Bolivia,’ proving the sport’s increasing visibility in the country.

Leading up to the Pan American Games, Moscoso says his training is intensifying. He also appreciates the sport’s growing popularity, saying, ‘Before, [racquetball] wasn’t very well known, but I think it’s now coming into fashion.’ His ‘always gold’ motto has seen him earn success so far and will hopefully bring home a medal this summer. Attention will also be on Roland Keller, who’s often at Moscoso’s side on the doubles court, as well as Yazmine Sabja and Valeria Centellas, who won the women’s doubles event at the Racquetball World Championships in 2018, Bolivia’s first gold medal ever in a World Championship.

It is thanks to these successes that the sport is growing. Rojas credits the ‘great coverage that is coming from the champions’ such as Moscoso and Keller. Adding to an improving back squad, all levels in Bolivia compete together, which means that up-and-comers have access to the top players, and training even at the lower levels can be intense. This is a bold strategy, but certainly enterprising, as the overall standard is bound to improve.

The future of racquetball in Bolivia certainly is bright – even gold! – but not every aspect of the sport is shining. At the 2018 South American Games, held in Cochabamba, the number of Bolivian nationals competing in the finals was unprecedented. The trick? Bolivian-born players defended the colours of Argentina and Colombia instead. ‘It’s likely because of the lack of support that we receive,’ Moscoso explains, ‘and the players want to become more professional.’ Simply put, Bolivians head to other countries to train and play. Despite recently increased governmental support, Moscoso says that ‘it still doesn’t settle a lot of the costs.’ 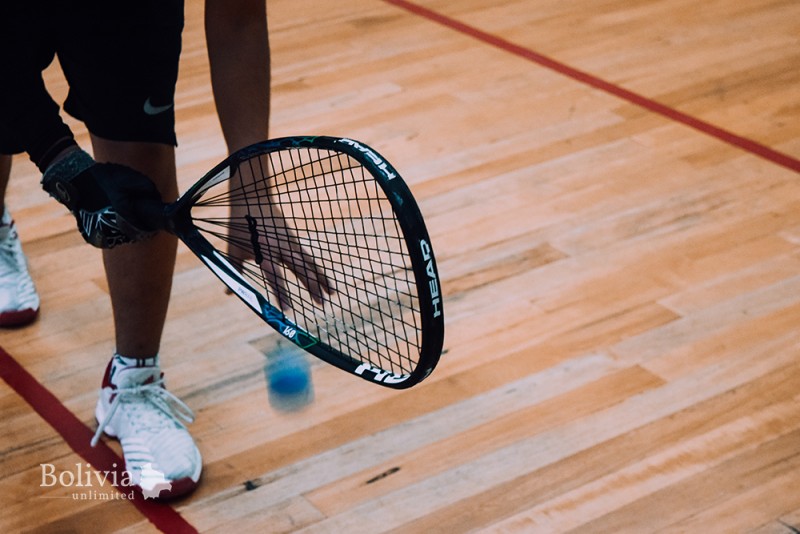 Even Alcoreza, FEBORA’s president, acknowledges that ‘the sport is successful because the players with the moral and economic support from their parents dedicate hours to training from a young age.’ He hopes the increased governmental support from the Tunkas programme will help players cover a part of their preparation and participation costs for international tournaments.

That said, the sport’s gender equality is a much more positive feature. Moscoso says that there has always been equal opportunity for women to train and participate. ‘It’s only a question of focussing and taking advantage of every opportunity,’ he says. Gold-winner Yazmine Sabja, now a household name in Bolivia, adds, ‘Winning medals for the country is an honour, a pride and a huge satisfaction.’ Her love for the sport is contagious, and she continues to inspire the next generation of young Bolivian racquetball players.

But the monetary concerns of the sport are far from the minds of the rising stars of Bolivian and international racquetball as they throw themselves all over the court. The positivity, respect and – above all – the desire to win and excel at all levels is readily apparent. The attitude of both the local and international players here at the court is golden – let’s hope the medals this summer are too.