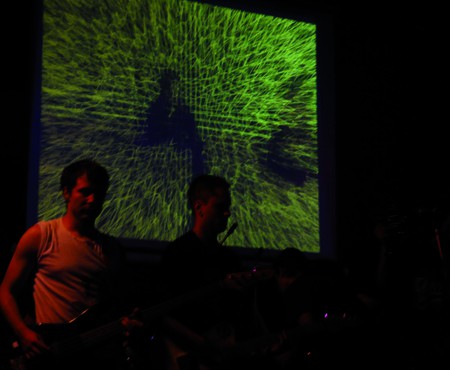 I have to admit that I was surprised to arrive in La Paz from London and discover bands making music inspired by LCD Soundsystem, whose 2009 album This is Happening has been making big waves back in England. But perhaps my surprise was justified, since as André de Oliveira and Jorge Zamora of local group Random were telling me, it’s a major challenge just to get the necessary equipment and technical support – let alone an appreciative audience – for their brand of Indy electronic music in La Paz. I spoke to them ahead of their second ever live gig at Alive Rockers in December:

BX: Tell me a bit about how the Random project came about...

JZ: Two years ago André came to a gig I was playing, and he got excited and told me, you know, “we have to do something”. So we just started jamming without any particular direction. Then we had an offer to play at a music festival, and after that passed through a long and stressful six month recording process for the first EP that´s coming out in the new year - which is basically an experiment.

AO: You know we wanted to do something new and creative and break the rules here in Bolivia. Here things are very ‘square’ (he means narrow minded – Ed.) and we wanted to get out of that…

JZ: We didn´t like the rigid structure that electronic music has, we were kind of bored of it, so we decided to mix in the stuff that we listen to – Hot Chip, LCD Soundsystem, a lot of old rock’n’roll… Talking Heads, New Order, a lot of post punk stuff...

BX: You say there’s quite a restricted scene here that you working in? Why is that?

JZ: The problem is that all the clubs here are very small, and most don’t have the physical space to support us. We´re seven people, so it´s a lot of instruments, a lot of gear...And what happened today will give you a good picture of the scene…We came here to do the soundcheck and the guy managing the sound system didn´t have any knowledge about what we were doing. He knows blues and rock bands – and that’s it. When he wanted to do the live mix of the band, he didn´t have any clue how we should sound. And besides that he didn’t even have the necessary gear to support us. It’s frustrating because we’ve both been in other places in South and North America, and know that these kinds of technical problems only really affect us here in Bolivia because...I wouldn´t say that they don´t have knowledge about electronic music, but they don´t have the technical knowledge about how it´s supposed to sound live.

AO: Even at City Hall events they don´t have the requirements. You ask for a drum kit, they give you whatever they can, and you have to work with it… but it´s falling to pieces...

JZ: But you know the problem is not money, that´s the funny part. You can say Bolivia, it´s a poor country…but in other countries people have the same issues we have here. And you find that all of your friends here who are DJs – some of them mediocre, I´m sorry – make a lot of money out of it. So the problem is not money, the problem is culture. People are very easily influenced. When DJ Tiesto came here it was a very funny social experiment because everyone started to download Tiesto music and within the month before he came they got to know all his tunes. And of course that doesn´t reflect what people like, you know? They don´t know what to like – they just get impressed by whatever the **** they listen to.

BX: What would you need in order to have an audience that was familiar enough with alternative music to be receptive?

JZ: We have a problem because we make music in English, and we´re in a Spanish-Aymara-Quechua speaking country. But we think, aesthetically, that rock’n’roll is Anglo, so when we try to make music with Spanish lyrics we get a result that we don´t like. It´s funny, because all our music is English in terms of language, but in terms of the concept it´s in Spanish - we have to mix all of the thoughts that we have in Spanish into a foreign language. But it´s better to make music in English because how many people speak Spanish all around the world?

BX: So when you think about the audience you´re trying to reach, you´re thinking of people outside of Bolivia why is that?

JZ: Because Bolivia is pretty narrow, musically speaking. And also the context we´re living in here, with an indigenous president and all of this indigenous philosophy - when you get into that kind of thing you´re going to get stuck. There is a problem with this philosophy of equality. I think that everybody should have the same opportunities as everybody else, but if people don´t have the same opportunities, what do they do? They sabotage the people that have more opportunities than others, and for what? So that everyone can be equal! That´s not fair.

AO: The government has to help musicians to grow, help the culture grow, but it doesn’t. So you have all the artists here trying to get out of Bolivia.

BX: I know that music education here is very much grounded in classical music. But how important is it to study music? Or are there just not enough people studying music?...

AO: Well there aren´t enough people studying music here, but also here if you study music you´re going to be poor, you´re never going to be somebody, so a lot of them decide to study law or something else. But also the universities teach stuff that most people aren´t interested in - when they see that it´s all classical they leave.

BX: Do you think that formal music education is important for a country´s musical culture – or is it about being exposed to music, about being able to explore the world musically? What´s the learning process?

AO: Well I think you need to be able to explore, but I also think it´s important to have good music teaching. Because in schools they don´t give a **** about music. So from the beginning music is not taken seriously. I think it needs to start in schools.

JZ: This country is so beautiful you know? Every time I leave to go and study I get frustrated because I´m going to a city whose people don´t need to leave, they have excellent universities and everything. Why do I have to leave my home? Because here we don´t have a single university that has a decent music major. And as for music technology – forget it, you can’t get it here. You have to go to Mexico to find it.

AO: To get a synthesizer here is impossible, you have to travel to find one. No one has one here.

BX: What would need to change in order for you to be able to have the opportunities you want to have, while at the same time preserving Bolivia´s unique culture?

AO: I think we need more cultural space. All the cultural spaces are managed by guys that only include their own groups of people. All the art and culture and Bolivia is kept in small groups, in small mafias. There are a lot of musicians in La Paz, but the best of them aren’t known. The best of them play in their garages and that´s it, because they don´t have the opportunities to play out, with the narrow thinking that we have here.

JZ: Promoters prefer to spend their money on safe stuff, things that people are gonna like for sure: pop music, tango, metal music…the biggest scenes.

AO: That´s why I want to create a record label, to promote those other bands, ´strange´ bands to most of the people – and expand the culture here. We want to create something really big – not just for music, for arts generally - photography, digital arts, stuff like that. So it´s a big plan…but it´s hard to make it happen here. I think it´s more for an external audience, but we wish to stay here because we want people here to see that there are other kinds of music and other kinds of talent.

BX: Well, we wish you all the very best with that!