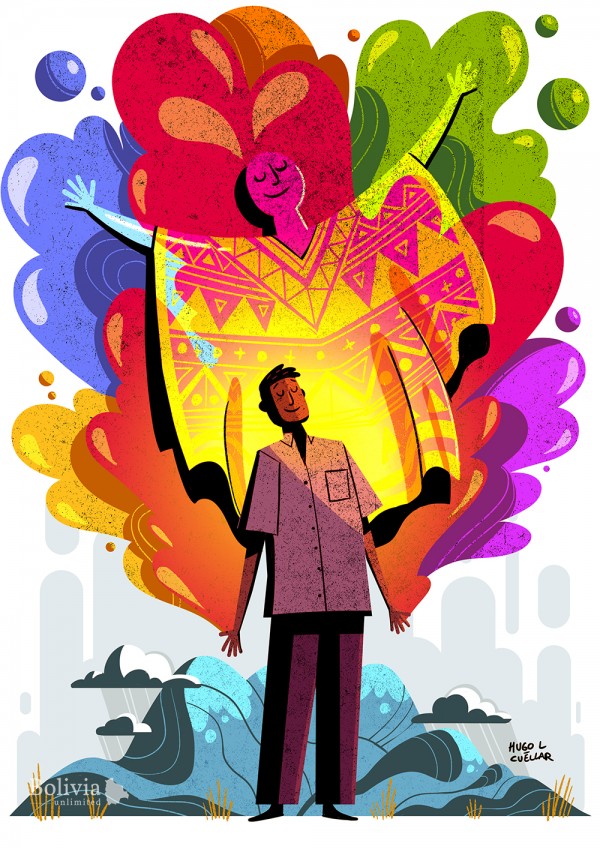 Investigating the concept of the ajayu in the Andean world

According to Aymara belief, everything in nature, from the towering mountains to the people below, has an ajayu that acts as an energy, spirit or soul. If this soul is lost and is left unrecovered, the effects upon a person can be disastrous. I wanted to know what people really believe about the ajayu, if they actually think it can be lost, and what they think could be the consequences of this happening.

Even the concept of ajayu is difficult to translate. Since I couldn’t find an agreed-upon definition, I spoke to various citizens in La Paz to hear what the word meant for them. Alejandra suggests it is a ‘very complex Andean concept of what the soul is, in the spiritual sense’, while Sonia, who is originally from Coroico, says it ‘also has a meaning of strength.’ Adriana, from Potosí, defines the word as ‘the essence of things; the spirit and energy of a being.’ Rather than being a fixed element or component of a person’s being, the ajayu is a dynamic presence instead, a dynamic quality of one's being.

According to sociologist Verónica Auza, although the ajayu can be an abstract ideal, it is governed by ‘a physical principle.’ The ajayu, she proposes ‘is assumed as the energy that gives life… There is a tendency to folklorise these things,’ she says. ‘It can be exotic and strange to explain energy from a cultural perspective, when in reality it is rooted in physics… If you lose your energy you are like the living dead, because without energy we are nothing. For that reason, it is necessary to prevent losing the ajayu and take care of your energy.

From this perspective, the ajayu appears crucial to everyday life as the force that motivates each living being. Auza describes the ‘speed’ in the artwork of English painter J.M.W Turner – which is often characterised by expressive and turbulent marine scenes – as ‘the prime concept of ajayu.’ These vivid comparisons bring the notion to life. As Auza refers to ‘energy’ over ‘ajayu’, it becomes clear that the concept relates to the needs of the human spirit, rather than to specific cultural beliefs.

While the majority of people that I spoke to agreed that the ajayu is the immaterial part of a person, the beliefs surrounding the concept varied greatly. Some people are convinced of the existence of the ajayu, and that it can leave the body. Vania, for example, believes that ‘when our body is not active, it is likely that the ajayu leaves it’. Adriana suggests the ajayu can leave your body ‘when you experience a strong emotion.’

In line with Adriana’s thinking, it is often said that children are susceptible to the loss of ajayu through fear. Even though the attachment of the ajayu to the body is said to be strong, which reduces the danger of losing it, people like Sonia believe that ‘when a person is severely frightened his ajayu can goes away and they must call it back with yatiris’. A yatiri is a traditional healer in Andean society who can call the ajayu with clothes and other personal items of the person who lost it. When the ajayu is lost, however, the space can be filled by evil spirits that drain the body of its energy.

Since children are supposedly more prone to feelings of fear than adults, the risk for them is said to be much higher.Some parents have been known to keep small children from going outside to prevent the loss of their ajayu. Others dismiss the concept entirely, either because they ‘believe in facts with more scientific support’, like Jose, or because the concept is incompatible with their religious beliefs. There are even parents who remain unsure of whether the ajayu is real or not.

There are many techniques to call the ajayu back to a person’s body. According to one of them, the energy must be called back from the place in which the person lost it. In some cases, the yatiri will take part of the soil where the ajayu was lost and place it under the victim’s pillow so it can return at night. Another technique says a person must immediately drink three sips of water right after a scare to swallow the ajayu back into the body.

Auza recalls the story of a thirteen-year-old girl who suffered severe burns and was slow to heal. When friends suggested that the girl had lost her ajayu from fright, her mother called it back with the girl’s clothing. Immediately after calling the ajayu, the girl began to recover. ‘There are many illnesses that sometimes do not have explanations because part of your energy passes out of your body when you’re scared,’ Auza explains. She further suggests that the loss of your ajayu may not cause you to physically die, but losing your energy can bring mental sickness and lethargy, including depression. ‘In the Andean world,’ she says, ‘when you are feeling melancholy, people could tell you that something is wrong with your ajayu.’ In this way, the presence or absence of an ajayu can provide answers to questions of unexplainable medical conditions.

‘The belief of having or not having an ajayu is very powerful’, Auza says. Although the belief can be impossible to prove, believing in the spirit can hugely impact a person’s daily life, by appealing to deceased loved ones or protecting children from fear. Auza explains that most cultures have similar concepts of the soul, some of which see it as the defining feature of a person’s existence. Even though many religions make a distinction between the soul and the body, ‘it’s the same in the Andean world,’ Auza asserts. According to the Andean cosmovision, without an ajayu or soul, one is nothing but a vessel.