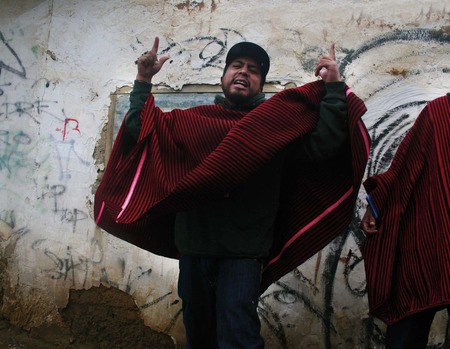 ‘From Bolivia, heart of dark skinned America, we come: miners, Indian peasants, students, men, women and children. We form a circle of raised fists, we say to those who stomp on our flag and steal our resource, “Enough. It’s time for rebellion!”‘

So spoke Nilo Soruco, a famous protest singer banned under the Bolivian leadership of the 1970s. Soruco wrote over 300 songs committed to the social and political struggles of South America, preaching justice and equality for his homeland.

The roots of modern Bolivian protest music can be traced back to the Spanish civil war (1936–1939). During this war music acted as a vessel, carrying the hopes of those fighting against Franco’s fascist army. These songs of freedom were carried over to Latin America on the backs of Spanish immigrants. South American protest music evolved from this moment, first gradually, then overwhelming in 1959, galvanised by the Cuban revolution. Cuban musical trends like the Nueva Trova, which harmonised revolutionary lyrics with traditional Cuban rhythms, nurtured the roots of a musical resistance across the continent, urging the working class to stand up and change their situation. Its lyrics spoke a socialist message of empowerment to the poor and oppressed.

The movement gathered a great Bolivian following amongst a number of musicians and activists of the time. In Nueva Trova style, traditional harmonies were combined with messages of social change by the likes of Benjo Cruz, an Argentinian-born Bolivian during the late 1960s, who became known as one of Bolivia’s most famous and influential folk singers. His politically charged songs mirrored the feelings of people under the military government, stirring civil unrest within the country. In 1970 Cruz exchanged his folk guitar for a gun and joined a group of guerrilla fighters. He died of exposure before ever being involved in any real combat situations, becoming a martyr for his cause like many fallen activists before him. But one cannot underestimate the impact his powerful voice and haunting lyrics had on the South American freedom movement.

Cruz’s lyrics went on to inspire during the turbulent, dark times of the 1970s and 80s. In 1971 Colonel Hugo Banzer Suarez seized control of Bolivia after staging a violent military coup. Banzer’s reign as dictator proved to be a gruesome and bloody time in Bolivian history, during which thousands fled to seek asylum in other countries. In 1974 a price increase in basic goods lead to a peasant uprising, where locals formed roadblocks in Cochabamba singing songs of resistance and calling for a change. They were then brutally slaughtered by the military.

The chaos of the 1970s and 80s did however give rise to new generation of singers willing to give their voices to another cause: a new generation that replaced rhythmic strumming of the folk guitar with the speed and fury of hip-hop. This unique blend of Andean folk styles, traditional harmonies, blinding intensity and lyrics that speak to the youth is known as wayna rap. It is music created to speak to young people, show them the injustices of the world they live in and inspire them to try and change that world. New sounds, new tempos, yet they speak with the same message: let us stand up for injustice and sing songs of freedom.