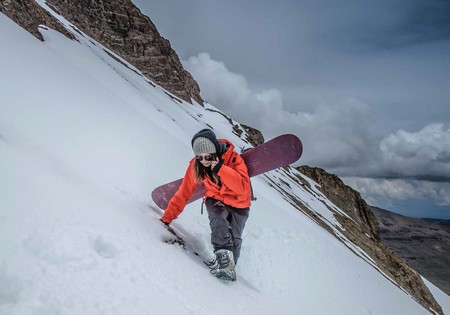 Making the Most of a Disappearing Water Source

Loose rock and snow crumble beneath my feet as I struggle to keep up with David, my leader, who is gliding effortlessly up the mountain ahead of me. I’m wheezing for air, my lungs cry out for oxygen. My body craves that vital molecule, which is scarce up here at over 5,000 meters above sea level.

My snowboard, which is loosely strapped to my backpack, constantly slides to the right. This shift in weight causes me awkwardly to teeter in that direction, like a poorly-manufactured doll that refuses to stand upright.

I glance up and reassess our destination. I swear it is moving away from us! My eyes dart over to the peak, which juts sharply from the snow and towers proudly at 5,400 metres. 'Ah yes', it appears to say, 'you really should see the view from here. It’s lovely, simply lovely. Tea anyone?' David shouts back at me with words of encouragement and I use them, as well as the mental image of a steaming cup of chai, to muster the resolve and keep moving.

I am hiking up Charquini, a glacier located in the Andes between the Chacaltaya and Huayna Potosi mountains; about an hour’s drive from La Paz. My source of transport, a rickety mini-bus filled to the brim with young Bolivians, somehow managed to surmount bumpy dirt roads and gushing creek bed crossings during our tumultuous journey here.

Today’s excursion was organized by Addiction Xtreme Bolivia, a relatively new snow-sports adventure tour company based in La Paz. On weekends, Addiction takes a group of ambitious participants to one of the many glaciers that surround La Paz for a day of skiing and snowboarding. Charquini, however, has been Addiction’s choice hot-spot for these outings. This is primarily due to its proximity to the city, as well as the accessibility of the terrain to individuals of all fitness levels. As I’ve come to find, all it takes is a rickety vehicle, your own two legs, and some determination. A ham and cheese sandwich might be advisable as well.

Just a few miles south of Charquini, however, is the Chacaltaya glacier, which happens to host a ski lodge, a chair lift, as well as the longest ski run in South America. So why bother setting my lungs on fire laboring up Charquini when all of the facilities of a ski resort are right next door, and with a parking lot no less? We would most likely be there, of course, were it not for one small detail, one missing factor in the recipe: snow.

Let’s rewind, shall we, to thirty years back to when the Chacaltaya glacier was in its hey-day. It was a weekend haven for Paceños to escape the congestion of city life and regain peace-of-mind by carving turns in snow high above the clouds. It was a time when tens of thousands of peripatetic souls would migrate from far and wide for the bragging rights of having skied the highest ski resort in the world.

Things have changed since, and significantly so. In 1998 Dr. Edison Ramirez, head of an international team of glaciologists that focused on Chacaltaya, predicted that the glacier would disappear by 2015. He was much too optimistic. According to the World Glacier Monitoring Service, the 18,000 year old glacier was officially pronounced ‘dead’ in 2009, six years before its projected demise.

A threefold increase in the rate of thawing among Andean glaciers appears to be the culprit of the glacier’s death, with the majority of fingers pointing blame to the usual suspect: global warming. In fact, according to the United Nations Intergovernmental Panel on Climate Change, which scientifically tracks and reports human-induced changes on the environment, climate change could melt away most of Latin America’s tropical glaciers between 2020 and 2030.

So what exactly are the implications of our glaciers’ rapid disappearance? The most immediate problem is that the thaw is putting a vital source fresh water at risk. Eighty percent of the drinking water supplied to the 2 million-plus population that live in El Alto and neighboring La Paz is provided by a reservoir under the Tuni Condoriri range. What portion of that reservoir water is glacial melt responsible for? The majority: 60 percent. It doesn’t end there. This epidemic also jeopardizes the future generation of hydropower, which Bolivia depends on for half its electricity. Not a quarter, not a third: half. That’s a big chunk and a stark reality.

When we finally reach the summit the view is breathtaking, not that I have much breath to give at that point. I will admit, the somewhat desperate scramble to get here was well worth it. I haven’t felt this accomplished since I resisted the red velvet cake at my friends wedding last year.

As I take in the stunning panorama of wispy clouds caressing snowcapped mountains, I can’t help but feel a slight tinge of sadness that this might all be gone within my lifetime. It’s a disturbing thought. Then I bring my mind back around to the present. I am right here, right now, on this beautiful glacier. I will focus on appreciating it while I am able to do so.

So we strap in. Within a few moments we are sailing down the untouched terrain, making fresh tracks 5,200 meters above sea level. Now, how many people can say they’ve ever done that?

What can we do about our melting glaciers in the meantime? Addiction Xtreme seems to have the right idea. 'There’s really not much we can do [about the melting glaciers], except for enjoy and take care of them while we can', says David, who manages Addiction’s photography.

As we approach the group, I pan my view to take in the smiling faces and the chorus of laughter being shared by all. I agree with David. Sometimes, one must simply make the most with what is available and enjoy it while we can. That is exactly what we are all doing here. And I’m glad - glad to have the opportunity to be a part of it.