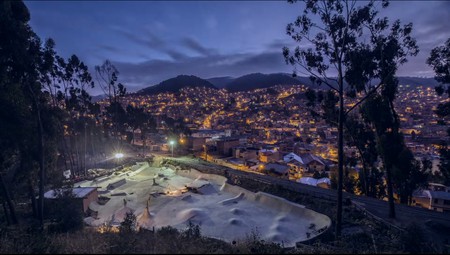 Katherine Browning visits the world's highest skate park to roll around and chat to one of the guys who made it all happen.

Photo: From the Levi's Documentary "Skateboarding in La Paz"

It's 2:30 on Wednesday afternoon and we're waiting for the vice-president of the Skate Association of La Paz to give us a ride up to the new skate park located inside the Parque Ecológico de Pura Pura in the city’s north.

Inaugurated in June of this year, the entire park was constructed in just four weeks with the help of professional skaters and volunteers from 15 countries around the world. With 2,100 square metres of smooth concrete--made by skaters, for skaters--it's needless to say that I’m pretty psyched to check it out. An hour later, our guy arrives. By the time we crawl through peak-hour traffic and arrive at Pura Pura the park is about to close, storm clouds are threatening and suddenly my chances of carving up some pavement aren't looking so great.

Luckily, we catch Milton Arellano on his way out, who is the president of the Skate Association of La Paz and the guy who got the whole skate park rolling. Arellano is a US-born-and-raised Bolivian, who, sick of his New York lifestyle, decided to move to La Paz almost four years ago. Interested in developing the rather marginalised local skate scene, it wasn't long before Arellano got involved with the local government.

Change came in 2011, he says, when the Association presented a 40-page document to the local government based on the City’s plan for the year 2040. The aim was to advocate the benefits of alternative sports like skating. Not only does skating offer a healthy alternative to at-risk youth with plenty of idle time on their hands, but due to the geographic features of the city, downhill skateboarding can even reduce pressure on public transport, as you only need to catch it one way.

The project initiated a dialogue about plans for a skate park in La Paz but, whilst pragmatic issues such as budgets and potential locations were more easily negotiated, one big problem remained: who would actually build it?

‘Every previous civic construction for skateboarding has been a failure…’ Arellano says. ‘The measurements are wrong, the surfaces are messed up. Typically the best skate parks are made and designed by skaters.’

Literally a week later, Arellano got a call from Arne Hillerns, a representative of Make Life Skate Life, which is a German NGO that builds skateparks in underprivileged communities around the world. It turned out the organisation was looking to develop its next project in South America.

‘I was like, holy shit, thank you skate Gods for falling from the sky!’ Arellano says.

The skateboarding branch of the company Levi's then came on board and agreed to pay for the flights and expenses of international volunteer skaters who would then build the park using materials provided by the City. In October 2013, representatives from Make Life Skate Life and the with the support of the German NGO Soforthilfe, based in La Paz, visited the city to finalise details concerning the project. Their visit coincided with German Reunification Day celebrations, which is why Arellano and the guys found themselves invited to ‘a huge drunk meeting’ in the German Ambassador's house.

‘So many people kept coming up to us because we stuck out like a sore thumb... Suddenly we were these skaters in ripped-up jeans and sneakers and everyone else is wearing suits, you know? But the more we talked about it, the more people were really impressed with the project.’

The Skate Association was encouraged to apply for a microgrant and was consequently awarded 10,000 euros from the German Embassy. The money, in addition to other funds raised online, helped pay for the park’s Skate Haus, which is now an integral part of the Pura Pura skate initiative.

Within the Skate Haus is a skate school, always attended in the park's opening hours by two international volunteers -skaters who have pledged to stay in La Paz for a one year period. The school is stocked with one hundred skateboards which were donated by the German organisation Skate Aid, and are loaned out at no cost. According to Arellano, weekends are crazy, apparently there are so many kids lining up to borrow skateboards that sometimes they have to use a roster system so that everyone gets a turn.

Today, though, is not one of those days and, as the hail starts to fall, I run back to the car to find it filled with adolescent skater amigos who seem to have come out of nowhere. And what do they think of the park?

‘It is incredible. It's like nothing else. It really has helped us a lot,’ says 16 year old Juan José Gutiérrez.

Juan José’s older brother Raul, 23, is currently the vice-president of the Skate Association of La Paz and the owner of a small, kick-start skate shop in the Zona Sur. How does Raul describe the vibe of the La Paz skate scene?

‘The park project really captures the essence of the sport,’ he says, ‘which is unity, zero discrimination, inclusion of everyone. When someone is trying to learn a new trick, it doesn’t matter if they're from El Alto or the Zona Sur, there's always someone who is going to be there to help, to show them, because I think we all want this sport to grow collectively.’

I'm convinced. Come next weekend, this wannabe skater-girl will be lining up at the Skate House, patiently waiting to borrow a board, along with the other hundred-something young paceños.

The world’s highest skatepark is open Wednesday through Sunday, 09:00 to 18:00. Use of the skatepark is free but there is a cost of 1.50 bolivianos to enter the ecological park.